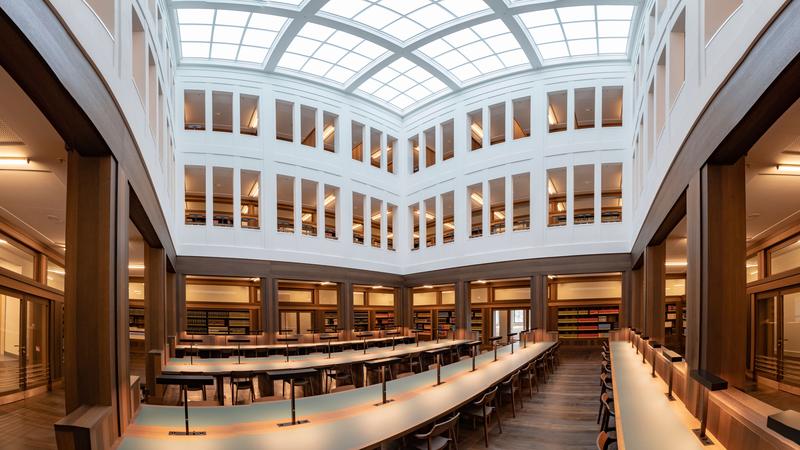 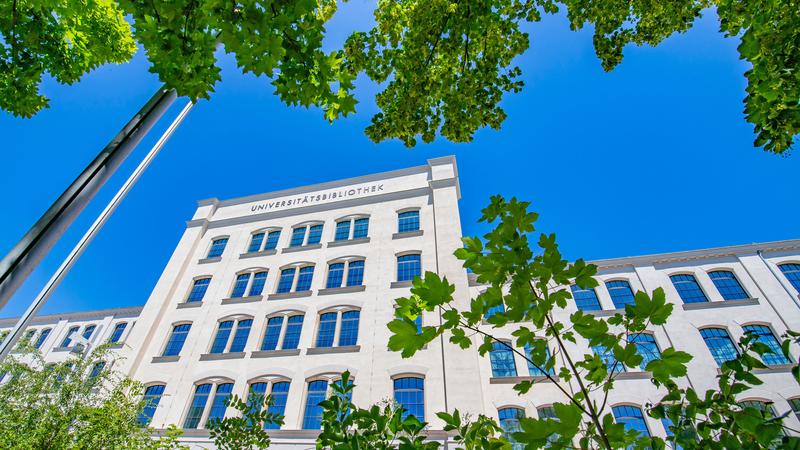 New "Palace of Knowledge" in the center of Chemnitz

On 1 October 2020, the new University Library at Chemnitz University of Technology will open its doors - with restrictions, of course, on ongoing operations and public access due to the corona pandemic. This will mark the end of the extensive reconstruction and renovation work on the site of the Alte Aktienspinnerei (Old Stock Spinning Mill) on the Straße der Nationen in Chemnitz.

The Free State of Saxony invested around 53 million euros. About 13.6 million euros of this came from the European Regional Development Fund (ERDF). "After great efforts, one of the most important industrial-historical buildings in the city of Chemnitz has been given a new modern use," said Saxony's State Minister of Finance Hartmut Vorjohann. The conversion of the Alte Aktienspinnerei into a university library brings Chemnitz University of Technology closer to the city center. "Teaching and research, but also student life, will thus shape Chemnitz's cityscape even more strongly in the future and give further development motivation to the nearby Brühl", the State Minister of Finance added.

"The university library is an important foundation for research and teaching at Chemnitz University of Technology at the highest level," says Saxony's Minister of Science Sebastian Gemkow. The merging of the previously decentralized holdings will allow even more intensive interdisciplinary work in the future - with longer opening hours starting next year. "The comprehensive modernization of the university library will also ensure round-the-clock access to countless digital media," says Gemkow.

"We are delighted about the completion and opening of our new Alte Aktienspinnerei, which gives our existing library locations and the university archive a common home and gives it a very special charm. I am firmly convinced that our new university library will not only significantly enrich our university but the entire city, and I would like to thank everyone who made this possible - especially the Free State of Saxony, the state-owned company Sächsisches Immobilien- und Baumanagement and countless employees of our university, who have accompanied or made possible the planning, completion, and relocation with the greatest commitment," says Prof. Dr. Gerd Strohmeier, President of Chemnitz University of Technology.

"Our new university library is a palace of knowledge in the center of the city, designed with great attention to detail. At the same time, it is an important meeting place - not only for students and employees of the university, but also for all citizens of the region and the city who are interested in scientific information," says Angela Malz, director of the university library. Starting on 1 October, from 10 a.m. to 5 p.m. Monday to Friday, users can borrow books that they had previously ordered and return books that they had borrowed.

Details of how to use the library - also during the Corona pandemic - can be found on the University Library website. Starting April 2021, the building will be operated as a 24/7 library. "This will then be a unique selling point for Chemnitz University of Technology, as no other library in Saxony makes its entire range of services available to its visitors around the clock every weekday," Malz says.

The three previously decentralized library locations, their magazines, and the University Archive of Chemnitz University of Technology have been concentrated at one location in the immediate vicinity of the main building of the university. This provides excellent transport links to the "Chemnitz Model," which links the surrounding region more closely with the city and the main train station. A total of 38 kilometers (23.6 miles) of library and archive materials moved into the new university library - that is more than 1.2 million books and journals. The university thus has a learning and communication center with more than 700 workstations for various types of learning and working: from quiet individual workstations and reading booths to the shared workstations in the central reading room and places in the learning and communication area for group work. An attractive venue for events was created on the first floor. In addition, a reading garden behind the building enables learning outdoors.

Before the Second World War, the historic building of the Alte Aktienspinnerei consisted of a central five-story central building with an ornamental crown and two elongated four-story side wings with a gable roof and striking corner towers.
Due to the conversion of the historic industrial building into a library and today's complex requirements for a modern building, extensive adjustments to the existing building were necessary. The two side wings were largely preserved. The cubature as well as the façade design of the building were restored to their original form. The windows were given their old form with the restoration of arches, sandstone cornices, and vaults, and the first floor got its plaster walls back. The central building as well as the outer gable fields of the side wings were gutted and rebuilt with a modified internal structure that takes into account the new use by the library. An extension north of the central building now provides space for the stacks. The building has a total floor space of 12,354 square meters (132,977 square feet). Following the style of the existing building structure, the open access areas of the library were arranged in the side wings of the building. The middle section is occupied by central functions such as the entrance hall, main access, and reading room. The administration is accommodated on the gable sides in the east and west and in the central building.

The construction work was carried out according to the winning design of the architects Siegmar Lungwitz, Lydia Heine, Thorsten Mildner (all from Dresden) and Thomas Rabe (Berlin) under the direction of the Chemnitz branch of the state-owned company Sächsisches Immobilien- und Baumanagement. Construction work began in April 2014 with the demolition of empty buildings around the main building. Starting in October 2014, the side wings were cleared, freed of all fixtures and fittings and returned to their shell state. During this process, about 6,500 tons of construction debris were removed from the building, most of it by hand. The valuable cast-iron supporting structure with brick cap vaults was made visible again. In July 2015 the complete gutting of the central building began. Parallel to this, the outer walls were secured statically and then the excavation pit for the central building and the magazine annex was constructed. In total, about 21,500 tons of demolition material were removed.

The builders also had to cope with surprises. The extremely poor subsoil had to be reinforced and the ceiling structures extensively renovated in places and partially replaced. A total of around 330 steel windows were installed, around 185 kilometers of cable were laid and around 22,000 meters of shelving were set up in the open-air area alone.

History of the Alte Aktienspinnerei

The stock spinning mill, built in the architectural style of historical eclecticism in Chemnitz, was built between 1857 and 1859 as a result of the establishment of a joint stock company as the largest spinning mill in Saxony at that time with 60,000 spindles. In contrast to earlier spinning mills, the architect Friedrich Theodor Roschig had planned the building entirely of iron and stone, largely dispensing with wood as a building material, primarily because of the risk of fire. The building was thus considered one of the most fire-safe in the city. The spinning mill operation ended in 1914 and the area became the property of the city of Chemnitz as early as 1905.

During the Second World War, the building was severely damaged and lost its roof and top floor. Subsequently, it was used, among other things, as a food distribution center, a temporary home for the destroyed opera house, department store, municipal library, office building and puppet theater and finally as a gallery. Since 2011 the building has been owned by the Free State of Saxony.

In the middle of 2015, the conversion to the University Library at Chemnitz University of Technology began. Starting June 2020, the three previous library locations and their magazines were merged in the building of the Alte Aktienspinnerei.