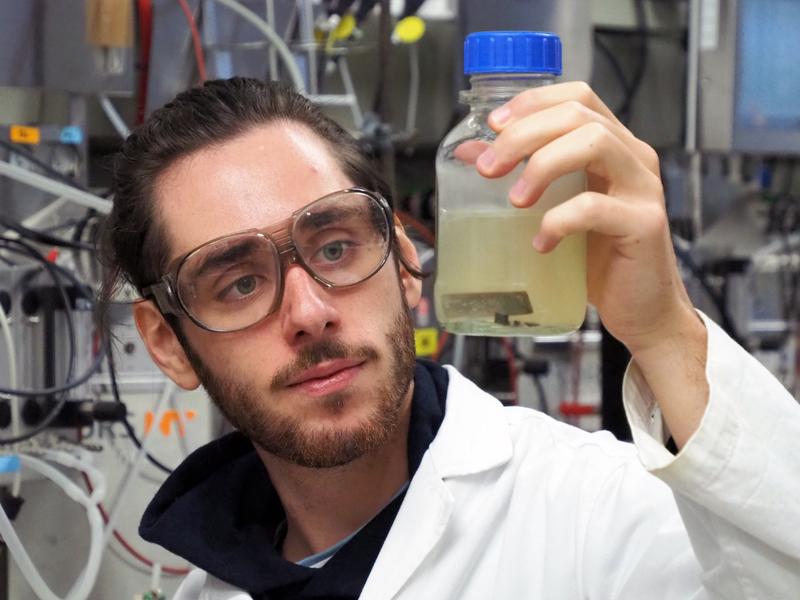 Biohydrometallurgists at TU Bergakademie Freiberg have demonstrated for the first time that leaching with the help of bacteria can also be used to separate components when recycling electronic waste. The team around Professor Michael Schlömann has now published their research results in the current issue of the journal MDPI / Recycling.

An old electronic board was placed in a flask filled with a bacterial solution. In the beginning, not much happens in Benjamin Monneron's test standing in the laboratory of the research group of Environmental Microbiology at the TU Bergakademie Freiberg. Then, the individual components started to fall off the circuit board and sink to the bottom of the test flask when Benjamin Monneron shook it. Twenty days earlier, the doctoral student had placed the old electronic part in an aqueous solution containing the microorganism Acidithiobacillus ferrooxidans.

The bacterium, invisible to the naked eye, has the ability to dissolve the solder by the oxidation of the added iron. What remains, is the circuit board itself which typically contains copper and eventually gold, as well as the components that were detached from the board with the solder - for example, diodes, capacitors, or resistors. "It is precisely these components that contain high concentrations of strategically important metals such as tantalum, ruthenium, gallium, or even dysprosium," explains Benjamin Monneron. The diodes, capacitors, and resistors can be sorted afterward and further treated. From the solution containing the dissolved solder, tin, silver and copper be possibly recovered and purified in further steps. "Biodismantling" is what the doctoral student calls the environmentally friendly process of detaching the components from the circuit board with the help of the bacteria.

The metals contained in each individual component can now be further recycled using specific methods, whether by leaching and solvent extraction or by a pyrometallurgical process. "The decisive advantage is that the rare elements contained in the components are strongly enriched by sorting them," explains Prof. Michael Schlömann, who is supervising Benjamin Monneron's doctoral thesis at the Institute of Biosciences at TU Bergakademie Freiberg. "The new method is particularly interesting for rare earth elements, which cannot usually be processed with recycling methods developed to date," says the biohydrometallurgy expert. The team’s analyses showed, that the dysprosium, for example, could be enriched by a factor of 140 by a biodismantling with subsequent sorting. "This allowed us to achieve concentrations comparable to those of the ore deposits from which the dysprosium usually comes," says Benjamin Monneron.
In conventional processes currently being tested in research and development for electronic waste recycling, the entire printed circuit board is shredded and chemically leached or thermally treated (by smelting). Only the highly concentrated metals can be recovered in the end. "If the elements are present in low concentrations, this is only possible through complex processes and with extremely high energy consumption," explains Prof. Michael Schlömann.

On the other hand, the separation of the components is of crucial importance in the new biodismantling process. That is why the components can be treated separately and the corresponding elements can ideally be made available again as secondary raw materials. "However, further research work is needed, because we still have to develop the mechanical sorting of the components obtained by means of bioleaching in cooperation with specialists for processing," says Professor Schlömann. If the scientists find a way to quickly and easily sort the components after bioleaching, unattained potential for the recycling of strategically important metals from electronic waste will open up.