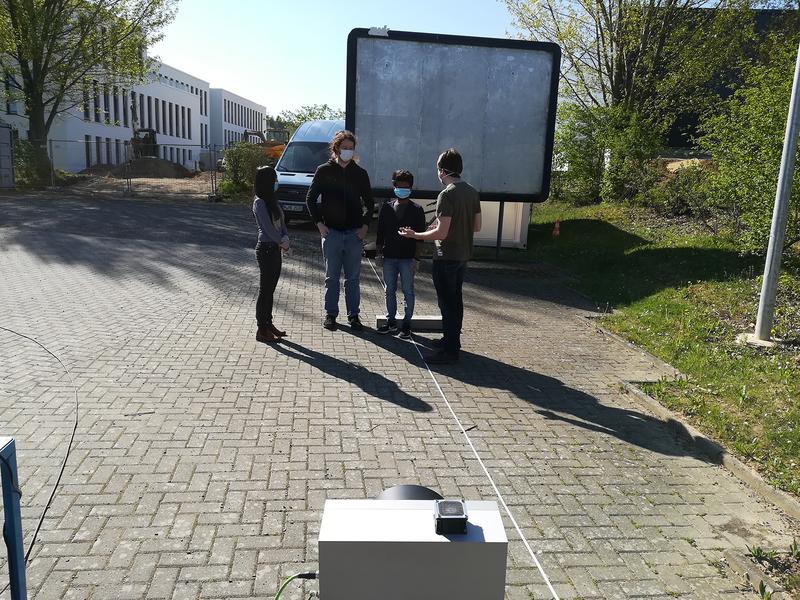 When someone is buried by an avalanche, earthquake or other disaster, a rapid rescue can make the difference between life and death. The Fraunhofer Institute for High Frequency Physics and Radar Techniques FHR has developed a new kind of mobile radar device that can search hectare-sized areas quickly and thoroughly. The new technology combines greater mobility with accurate detection of vital signs.

Some regions of the world record hundreds of earth tremors a day. Most of these are of a minor nature – but occasionally an earthquake strikes of such destructive power that it destroys buildings and triggers tsunamis that lay waste to huge areas. Faced with this kind of disaster, rescue crews often struggle to locate and dig out injured people quickly enough to save them. Although radar devices can provide useful assistance, current systems are limited to stationary operation. Set up in a fixed spot, they can only search up to a distance of twenty to thirty meters, depending on the radar specifications. In disasters involving large-scale destruction, this distance is simply too short.

Based in Wachtberg, Germany, Fraunhofer FHR offers a technology that aims to significantly increase the search radius. “What we’ve developed is a mobile radar system that locates people buried under rubble by detecting their pulse and breathing,” says Reinhold Herschel, a team leader at Fraunhofer FHR. “Our longer-term goal is to mount this radar device on a drone and fly it over the disaster site. This would make searches faster and more effective even in areas extending over various hectares.”

In basic terms, the radar device works by emitting waves. Part of each wave is reflected by the debris, but some of the wave passes through the rubble and is reflected by people and anything else buried underneath it. The distance to an object is calculated by measuring how long the signal takes to return to the detector in the radar system. If that object is moving – even if it is just a buried person’s skin rising and falling by a few hundred micrometers with each heartbeat – this changes the phase of the signal. The same applies to the tiny movements caused by their breathing. People typically take a breath no more than 10 to 12 times a minute, while the heart beats an average of 60 times a minute, so it is relatively simple to distinguish between these different signal changes using algorithms. The researchers can also determine exactly where the buried person is located.

This is made possible by a special type of radar known as MIMO, which stands for multiple input, multiple output. MIMO radars use multiple transmitters and receivers to set up different “vantage points” which can then be used to identify the exact location where paramedics should dig for survivors.

What is unique about this technology is its combination of mobility and accurate detection of people’s vital signs. The mobility advantage generally refers to examples such as mounting the device on a drone and flying it over the disaster site, but it is also possible to turn this principle on its head. Set up the system in a fixed spot, for example, and it can be used to detect the vital signs of people moving around close to the radar. There are a number of situations where this could be useful, such as providing first aid to large numbers of casualties in a sports hall following an earthquake. In this case, the radar device could be used to record vital signs and assign them to each individual to determine who is in most urgent need of assistance. In this example, the algorithm focuses primarily on detecting changes such as whether someone’s heart is beating irregularly or a patient is breathing very rapidly. The radar system can distinguish the individual signals and display them separately. Accuracy is also high, with the device measuring pulse rates with 99 percent accuracy as compared to readings taken using portable heart rate monitors. More research is still needed on using the radar to find people buried under rubble, but researchers have already made significant progress in detecting vital signs close to the stationary radar system, successfully putting it to the test at distances of up to 15 meters. The next step towards a viable product would be to conduct a verification study with a partner in the medical arena. Once the radar system has obtained a positive evaluation based on sufficient data, it can then move into a certification process with interested industry partners. It will probably take around two more years before the developers create a product that is accurate enough to detect buried casualties reliably in tricky scenarios such as soil or concrete and suitable for UAV-based applications. Fraunhofer FHR will be continuing its research in this area to meet this ambitious goal.