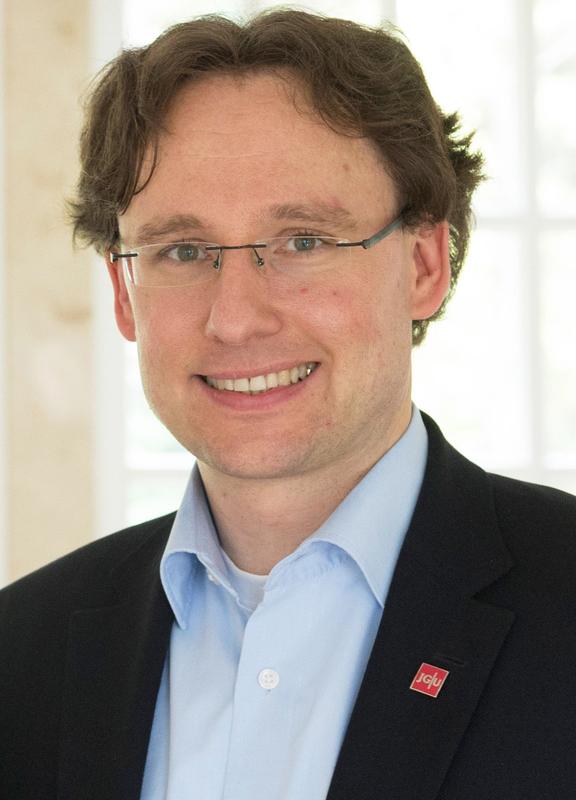 The solid-state physicist Professor Mathias Kläui has been elected as a Fellow of the American Physical Society (APS) in recognition of his experimental research into magnetic materials, spin transport, and the dynamics and manipulation of spin textures on the nanoscale level. Kläui heads a research group at Johannes Gutenberg University Mainz (JGU) which focuses on the future technology of spintronics. Spintronics involves the use of the magnetic moment of electrons in addition to electrical charge and is considered to be a technology with considerable potential. Indeed, it may be possible to use spintronics in various applications in place of semiconductors where this technology reaches its limits.

Mathias Kläui studied Mathematics and Physics at RWTH Aachen University and at the University of Cambridge in the UK. He subsequently earned a doctorate in Physics at Cambridge before becoming a postdoc at the IBM Research Center in Rüschlikon, Switzerland. After holding various posts at the University of Konstanz and in Switzerland, he was appointed professor at JGU in 2011. Here, Kläui has been director of the Materials Science in Mainz (MAINZ) Graduate School of Excellence since 2012. He has been speaker for the Collaborative Research Center TRR173 Spin+X funded by the German Research Foundation since 2016 and spokesperson for the TopDyn – Dynamics and Topology Center since 2019. In 2014, he became a founding director of the Gutenberg College for Young Researchers (GYR), which is dedicated to supporting outstanding young academics at Mainz University.

Outstanding research achievements in the field of nanomagnetism

In 2011, Kläui was awarded the Nicholas Kurti Science Prize for his research in the field of nanomagnetism. He was named a Fellow of the Institute of Physics (IOP) in 2014 for his outstanding contributions to the topics of nanomagnetism and spin dynamics. In October 2019, he was named a 2020 Distinguished Lecturer by the IEEE Magnetics Society, the world's largest organization devoted to magnetics.

The physicist has received various grants for his research, particularly from the EU. In 2009 and 2015, the European Research Council awarded him an ERC Starting Grant and a Proof of Concept Grant to support his research into spin currents and for the development of innovative magnetic sensors, the purpose being to help facilitate the link between theoretical research and commercial applications. Last year, the scientist – together with his cooperation partners at Forschungszentrum Jülich and Radboud University in Nijmegen in the Netherlands – received a renowned ERC Synergy Grant. In this ERC project, the partners hope to be able to identify as yet largely unexplored three-dimensional nanoscale magnetic structures that have particle-like properties. To date, the existence of such structures has only been theoretically predicted.

With more than 55,000 members, the American Physical Society is one of the largest scientific societies dedicated to physics, along with the German Physical Society (DPG). The APS was founded in 1899 and its mission is to promote and disseminate knowledge in the field of physics. Each year, the association appoints a maximum of 0.5 percent of its members to a fellowship, which currently translates to around 275 individuals. Being selected for a fellowship is considered a special honor as the application review process is carried out entirely by professional peers. Fellowships are bestowed on scientists who have made significant advances in basic research or have made major contributions to physics-based applications in science and technology.