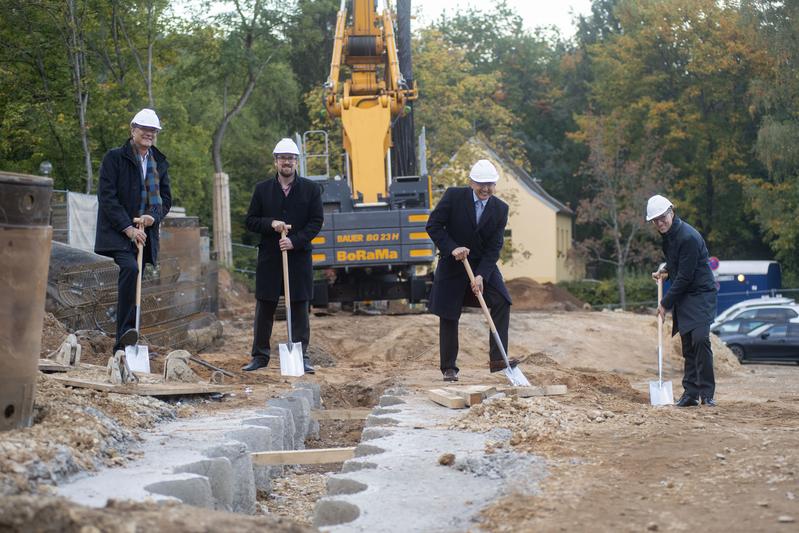 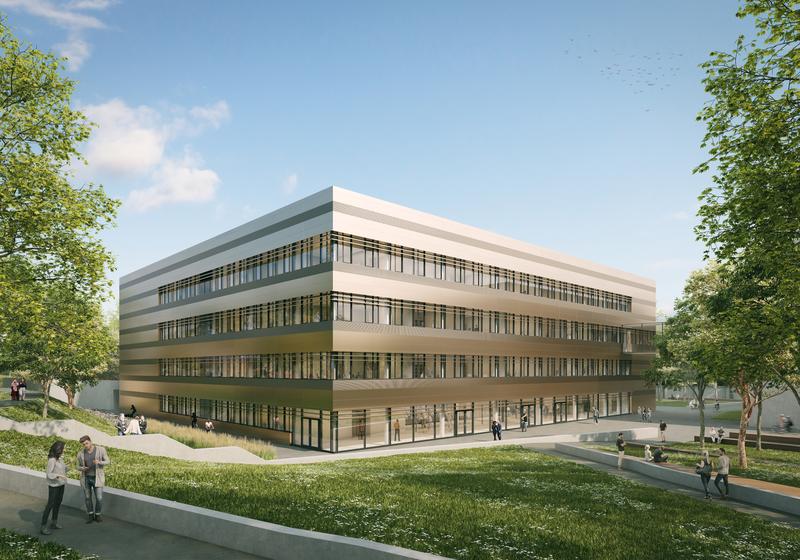 First Mayor Florian Janik and representatives of University Hospital, University, and Max Planck Institute emphasise the importance for the research activities in the metropolitan region - a "beacon project with nationwide appeal".

An idea is taking shape: After years of preparation and planning, the construction of the Max-Planck-Zentrum für Physik und Medizin (MPZPM) in Erlangen is now starting. By 2024, a building with laboratories and offices will be erected on five floors for around 180 employees on the grounds of the University Hospital at the Schwabachanlage. Physicists, mathematicians, biologists and physicians will work together to investigate new ways of treating diseases such as cancer or paraplegia. They want to make use of the strengths of the various scientific disciplines and the expertise of the institutions involved. Initiators of the project are the Max Planck Institute for the Science of Light (MPL), the Friedrich-Alexander University Erlangen-Nuremberg (FAU) and the University Hospital Erlangen. The State of Bavaria is investing around 57 million euros in the project.

At the symbolic groundbreaking ceremony on the construction site, Erlangen's First Mayor Florian Janik emphasised that the excellent medical care provided by the University Hospital is largely due to the outstanding research opportunities it provides for scientists - to the great benefit of all citizens. "The MPZPM is about creating a place where research is carried out that will ultimately advance our society."

All of this is happening in a "place steeped in history, where terrible crimes were committed in the name of science, in the heart of our city." It is therefore an important place to show that "we deal with medicine differently today, that we feel obliged to make a contribution so that similar events will never happen again." Janik was referring to the historical mental asylum (HuPfla), where during National Socialism patients became victims of euthanasia. One side wing of the HuPfla (the former so called Patiententrakt) will partially give way for the new MPZPM facilities, while the remaining part of the building (the so called Mittelrisalit) will be preserved and is currently being reconstructed to host a memorial for the victims.

"All of us at the MPZPM are committed to the project with great passion and energy," ex-plained Jochen Guck, Director at the MPL and one of the members of the Scientific Board of the MPZPM, the management committee of the new centre. "It has all it takes to become a beacon that shines far beyond Erlangen and Germany.”

He emphasised the importance of the MPZPM not only for Erlangen as a research location, but also for the economy of the region. Numerous new jobs are being created at the Max-Planck-Zentrum für Physik und Medizin - for scientists as well as for administrative staff and technicians. The construction and operation of the MPZPM creates a significant local added value.

The planned building has almost 5700 square metres of floor space, half of which will be occupied by modern state-of-the-art laboratories and half is devoted to office and communication space as well as a lecture hall. An air bridge will connect the building to the neighbouring Translational Research Center IV (TRC IV) of the University Hospital, which is currently being built in parallel. This is yet another example of close links between the Erlangen institutions involved in the project.

Even though the scientists will not move into the new building until early 2024, they are already working closely together today - despite their offices and laboratories being scattered over the city. MPL Director Vahid Sandoghdar, Head of the Nanooptics Division, is one of the leading figures of MPZPM. As early as 2013, he brought up the idea of making modern methods of physics usable for medicine in a dedicated centre. A part of his group will move into the new building. "It is my vision that physicists, mathematicians, and medical researchers will have lively discussions in every single corner of the building, and also that I can join these discussions," says Sandoghdar, "that's what I'm particularly looking forward to."

Almost the whole Biological Optomechanics Division of MPL Director Jochen Guck will move into the new building. FAU is represented by the group of Kristian Franze, who was awarded a Humboldt Professorship by the Alexander von Humboldt Foundation last year. The university has just recruited him from the British University of Cambridge to Erlangen and appointed him as Director of the Institute for Medical Physics and Microtissue Engineering. Vasily Zaburdaev, heading the Chair of Mathematics in the Life Sciences at the Department of Biology, also comes from the FAU. There are also several independent junior research groups that already started joining the MPZPM.

The researchers are already actively working on burning medical questions. For example, Professor Sandoghdar and his research group have built a new type of a microscope. This instrument can be used to make the smallest biological structures visible. It allows to study for example SARS-CoV-2 - the new corona virus - attacking living cells with highest spatial and temporal resolution. The experiments are currently being carried out in close cooperation with the University Hospital.

Professor Guck and his research team have developed a new method for detecting pathological changes in cells by literally squeezing them. They can measure as many as 1000 blood cells per second to determine whether the blood is showing any signs of infection. Especially in times like current covid-19 pandemic it is important to be able to diagnose viral infections quickly and reliably.

Professor Franze studies how mechanical forces influence the growth of nerve cells. His hope: to gain insights into how severed nerve tracts in the spinal cord can be made to regrow and regenerate again. Finally, Professor Zaburdaev uses mathematical modeling to describe, among other things, how gonococci bacteria form colonies and how these pathogens of one of the most widespread sexually transmitted diseases disseminate in the body. As these (and many other) bacteria become increasingly resistant to antibiotics, he and his team hope to be able to provide impulses for new therapeutic concepts.

"All these examples show how fruitful it is to use the tools of physics and mathematics to better understand diseases," explained Professor Guck in his speech during the ground-breaking ceremony. "And thinking much further: to be able to describe more precisely what life actually is."