German Counties: People in the South Live Longer than those in the North 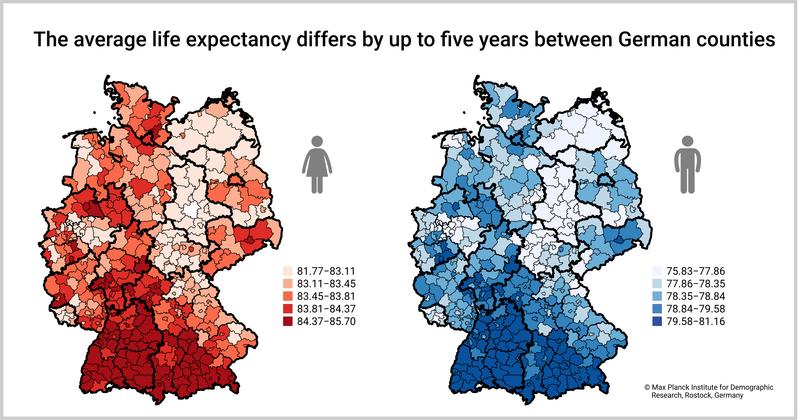 People do not reach the same age everywhere in Germany. Roland Rau calculated the average life expectancy for men and women in all 402 German counties. He discovered that the numbers varied by more than five years and attributed that difference to poverty.

In the German regions of Southern Bavaria and Baden-Württemberg, people get very old. The average life expectancy in German counties differs by more than five years for men and for women there are differences of almost four years.

Women in the Salzlandkreis in Saxony-Anhalt on average only live to be 81.8 years old and women in the district of Starnberg in the southwest of Munich reach an average age of 85.7 years. There is also a north-south divide among men. In Bremerhaven in the North they live on average only 75.8 years, whereas in the area around Munich men live to 81.2 years old.

Overall, more counties with low life expectancy are located in eastern Germany than in the west. But also in western Germany, especially in the Ruhr area, there are counties where people die earlier on average. These include Dortmund, Gelsenkirchen and Essen.

Together with his colleague Carl Schmertmann, Roland Rau estimated the life expectancy for women and men in all 402 districts in Germany with the help of the mortality rates from 2015 to 2017. This was particularly challenging in counties with a small population, such as the smallest German county of Zweibrücken in Rhineland-Palatinate with only about 34,000 inhabitants. Here, individual deaths can have a strong influence on average life expectancy. The estimates become unreliable and lead to statistical uncertainties.

That is why the two researchers combined the mortality rates of several years and used their new calculation model to quantify the uncertainty of their estimates. "Our results are reproducible, which means that other researchers can follow our model step by step," explains Roland Rau, Max Planck Fellow at the Max Planck Institute for Demographic Research in Rostock, Germany. In addition, all the data is freely available to researchers on the Internet. The two demographers published their study in the leading German medical journal “Ärzteblatt”.

After calculating the life expectancies, the two researchers investigated which factors contribute to the different life expectancies. Both the unemployment rate and the rate of Hartz IV recipients in a county have a strong influence. "If you want to reduce differences in life expectancy, you must above all improve the living conditions of the poorest part of the population," says Roland Rau. His analysis also shows that other factors such as average income, the number of doctors per 100,000 inhabitants, or population density that are often discussed have a much smaller influence on life expectancy in Germany.