A question of affinity: How to design organic solar cell materials 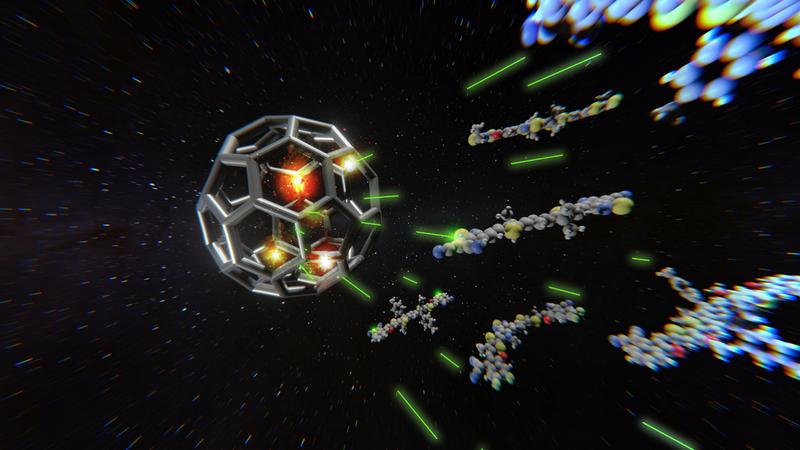 A collaboration of scientists from the Max Planck Institute for Polymer Research (MPI-P) in Germany and the King Abdullah University of Science and Technology (KAUST) in Saudi Arabia have recently scrutinized organic solar cells and derived design rules for light-absorbing dyes that can help to make these cells more efficient, while tailoring the absorption spectrum of the cells to the needs of the chosen application.

Most of us are familiar with silicon solar cells, which can be found on the rooftops of modern houses. These cells are made of two silicon layers, which contain different atoms such as boron and phosphorus. When combined, these layers direct charges generated by the absorbed sunlight towards the electrodes – this (photo)current can then be used to power electronic devices.

The situation is somewhat different in organic solar cells. Here, two organic materials are mixed together, rather than arranged in a layered structure. They are blends of different types of molecules. One type, the acceptor, likes to take electrons from the other, the donor. To quantify how likely “electron transfer” between these materials takes place, one measures the so-called “electron affinity” and “ionization energy” of each material. These quantities indicate how easy it is to add or extract an electron from a molecule. In addition to determining the efficiency of organic solar cells, electron affinity and ionization energy also control other material properties, such as color and transparency.

By pairing donor and acceptor materials, one creates a solar cell. In an organic solar cell, light-particles (“photons”) transfer their energy to electrons. Excited electrons leave behind positive charges, called “holes”. These electron-hole pairs are then separated at the interface between the two materials, driven by the differences in the electron affinity and ionization energy.

Until now, scientists assumed that both electron affinity and ionization energy are equally important for the solar cell functionality. Researchers from KAUST and MPI-P have now discovered that in many donor-acceptor blends, it is mainly the difference of the ionization energy between the two materials, which determines the efficiency of the solar cell. The combination of results from optical spectroscopy experiments, performed in the group of Frédéric Laquai at KAUST, as well as computer simulations performed in the group of Denis Andrienko, MPI-P, in the department headed by Kurt Kremer, allowed precise design rules for molecular dyes to be derived, aimed at maximizing solar cell efficiency.

"In the future, for example, it would be conceivable to produce transparent solar cells that only absorb light outside the range visible to humans - but then with the maximum efficiency in this range," says Denis Andrienko, co-author of the study published in the journal “Nature Materials”. “With such solar cells, whole fronts of houses could be used as active surface”, Laquai adds.

The authors envision that these studies will allow them to reach 20 % solar cell efficiency, a target that industry has in mind for cost-effective application of organic photovoltaics.