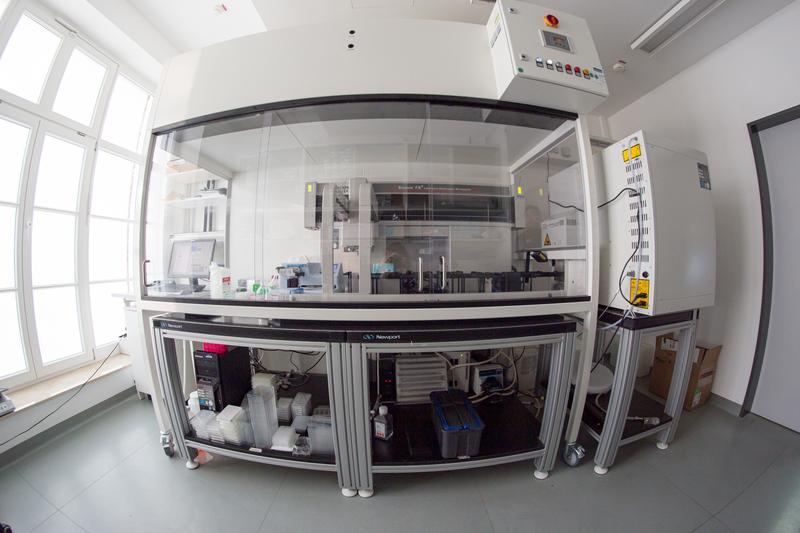 ***Sometimes hundreds of thousands of potential therapeutics need to be tested in large-scale, fully automated experiments to identify a single effective drug. Most compounds do not work as desired, and some are even toxic. Since the development of the induced Pluripotent Stem (iPS) Cell technology in 2006, researchers have been able to produce stem cells from skin biopsies and blood samples. To approach physiological conditions in the laboratory, many researchers use iPS cell technology to produce three-dimensional, organ-like tissue aggregates (organoids). A team of scientists at the Max Planck Institute for Molecular Biomedicine in Münster has now succeeded in using human cells to produce midbrain organoids in a fully automated process. Such organoids can be produced, grown, and analyzed in detail within a high-throughput workflow. The technology transfer company Max Planck Innovation has now licensed this process to the American biotech company StemoniX, Inc.***

iPS cell technology is an ideal solution for highly time-consuming and cost-intensive therapeutics research. Induced pluripotent stem cells are produced in the laboratory from human skin cells. Moreover, iPS cells can multiply indefinitely in culture and can be converted to all cell types of the body. In this way, it is possible to obtain patient-specific iPS cell lines that can serve as disease models. This is particularly interesting for diseases for which there are no suitable animal models, such as Parkinson's disease.

In order to best mimic diseases in the laboratory, scientists have been moving away from two-dimensional cultures and developing three-dimensional systems, as these more closely reproduce the cellular diversity, structure, and complex interactions of the organ. Organoids are one example of such a system. “Organoids grow and mature into a tissue aggregate from iPS cells or tissue-specific precursor cells in a self-organizing manner, just as would happen in the human body,” explains Jan Bruder, the scientist at the Max Planck Institute for Molecular Biomedicine and in charge of the study. “Organoids are more complex, can more fully mimic the characteristic physiological properties of the tissue, and thus offer several functional advantages over traditional models.”

Max Planck researchers now made significant advances in organoid generation and analysis, which make their discoveries suitable for implementing into large-scale research such as high throughput drug discovery. First was devising a strategy that created mid-brain organoids from small molecule neural precursor cells (smNPCs), which have the ability to generate all the relevant mid-brain cells more quickly, and with greater reproducibility, than current methods. Of specific importance is the generation of dopamine-producing neurons, which are precisely the nerve cells that die first in the brains of Parkinson's patients.

“Instead of growing midbrain neurons from iPS cells over one or two months, we used smNPCs. This allowed us to obtain dopamine-producing nerve cells within two weeks,” says Henrik Renner, lead author of the study and a PhD student at the Max Planck Institute for Molecular Biomedicine.

The second advancement was demonstrating that organoid production could be accomplished with automated pipetting robots to produce large quantities of organoids from the smNPCs in a reproducible manner.

The results were both pleasing and promising: “The midbrain organoids from smNPCs are not only highly homogeneous,” says Henrik Renner, “they also exhibit significant characteristics of the human midbrain and aggregate-wide spontaneous, synchronized neural activity, similar to developing human nerve tissue.”

The third improvement was automation of the analysis. Here, too, the research team consistently relied on robotics. “We developed a protocol that allowed us to examine the organoids in their entirety in an automated manner by targeting specific proteins throughout the organoid with antibodies and then using florescence microscopy to capture the images,” says Henrik Renner.

The advantage of this method is that individual cell subtypes can be measured in a high-throughput compatible system in the intact organoid. Thus, for the first time, drug effects can be assessed on a single-cell level within a complex 3D cell environment in a fully automated high-throughput workflow. “The combination of production and analysis of organoids in one and the same culture format, in which all steps are seamlessly intertwined, is a significant step forward,” emphasized Bruder. The research was funded by an advanced grant to Hans Schöler, as part of the ERC Horizon 2020 program.

Max Planck Innovation, the technology transfer organization of the Max Planck Society, has now licensed this process to the American biotech company StemoniX, which has a proven ability to transfer and industrialize the innovation of top academic institutions such as the Max Planck Institute. StemoniX develops iPS cell-based 3D microOrgan® tissue constructs, disease models, and advanced analytical methods to ensure that only the safest and most effective compounds are advanced through the discovery pipelines of their biopharma partners.

By combining the processes for the automated production and analysis of extremely homogeneous human midbrain organoids licensed from the MPI, StemoniX is expanding their microBrain® platform to the human midbrain.

“The new technologies for generating midbrain organoids are a perfect fit for our human-first approach to drug discovery and ability to mass-produce highly reproducible and physiologically relevant iPS cell-based models,” says Ping Yeh, Co-founder and CEO of StemoniX. “We have already demonstrated the clinical relevance of microBrain 3D in early detection of neurotoxicity as well as its ability to rapidly discover and stratify new targets and potential therapeutics for diseases such as Rett syndrome. Incorporating mid-brain biology and associated disease models for afflictions like Parkinson’s disease into our microBrain and AnalytiX™ technology will strengthen biopharma pipelines and accelerate therapeutic development across multiple devastating diseases.”

Leonie Mönkemeyer, Patent and License Manager at Max Planck Innovation, concludes, “We are excited to see StemoniX advance our scientific discoveries. By combining our respective technologies, the search for therapeutics across multiple neurological disorders can be restricted to a narrower pool of candidates at an early stage by determining effectiveness and undesirable side effects long before clinical phases. The use of these models in drug development has the potential to further increase the number of newly approved and effective drugs as well as to significantly shorten development cycles, which could benefit many patients every year.”