The FRADE project improves fall prevention for the elderly 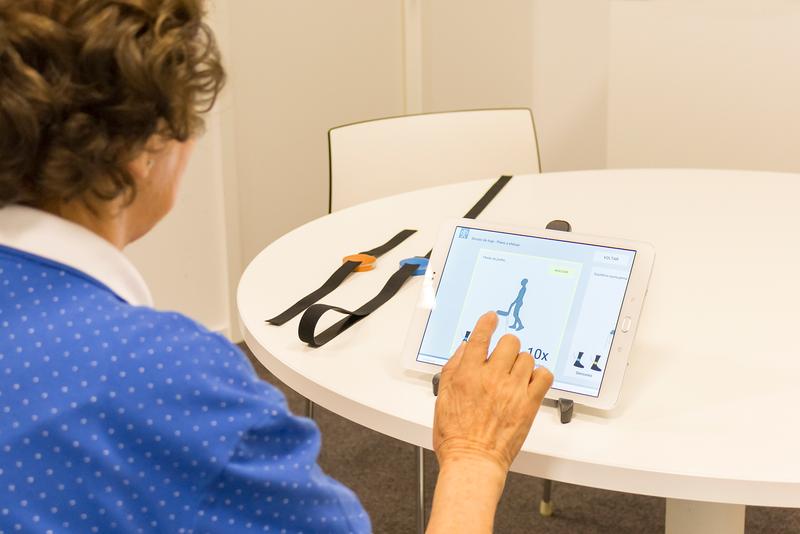 Frail people and those at risk of falling can also practice at home with the tablet app. On the left in the image: the sensors that register all of the movements. | Copyright: © Fraunhofer AICOS | Download

Senior citizens who are a little weaker or frail are often prone to falling. The FRADE concept of the Fraunhofer Center AICOS in Porto offers effective help with prevention. Sensor-based analysis of movements serves as a basis for a tailored training program. If the person actually falls, the system alerts the caregiver via text message. FRADE thus closes a major gap in health care.

Many older and frail people live with the risk of falling in their home and then possibly waiting hours for assistance, which is often a persistent fear for their families. This is also a problem for caregivers who visit their patients daily, but know that they will be unsupervised for several hours.

The Fraunhofer Center for Assistive Information and Communication Solutions AICOS in Porto, Portugal, developed the FRADE project specifically for this problem. FRADE stands for “pervasive platform for fall risk assessment, fall detection and fall prevention.” The central component is a sensor that is attached to the clothing. If the person wearing the sensor falls down, an alert is sent to the caregiver via text message. But this is just one part of the multistep concept. “We want to prevent people from falling in the first place,” explains Project Manager Joana Silva.

Analysis of movements, assessment of the risk of falling

The first step in the FRADE concept is to assess the elderly or frail person’s risk of falling with a series of tests that analyze the person’s typical movements. Under the supervision of a therapist, the person performs various movements, which can include getting up from a chair, walking a few meters, and standing still, with each exercise repeated several times. An acceleration sensor attached to the ankle or the waist registers movements and sends the data via Bluetooth Low Energy (BLE) to a desktop computer. A pressure-sensitive mat that measures the distribution of bodyweight on the soles of the feet is also used for certain exercises. A large display shows plantar pressure distribution as a graph in real time. The system is able to detect if pressure is applied to the feet unevenly – for example, when the person bends their knees – which may be an indication of balancing issues. The mat sends this measurement data to the computer via USB, where it is analyzed by software equipped with specific algorithms. “All of the data is compiled to create an individual movement profile, which we can use to determine the person’s risk of falling. That is one of the FRADE innovations,” explains Joana Silva. All of the information finds its way to the back-end server, which also serves as a central data storage platform for caregivers.

The tailored training program for home

In the second step, the person is provided with a kit consisting of a sensor and Android tablet as well as a training program for home that is tailored to their individual movement profile and risk of falling. The training app shows in graphic form how to perform the movements. Once again, the wearable inertial sensor analyzes the movements. A microprocessor integrated into the sensor processes all of the data and sends it to the tablet via BLE. Those who train on a regular basis – i.e. around two to three times a week – can significantly reduce their risk of falling after a period of at least eight weeks.

The person is not entirely on their own as they do the exercises, as the Android app sends the data to the web server via the apartment’s Internet connection. Caregivers and therapy specialists thus have access to their client’s training data, which is visualized for them. If necessary, they can intervene and provide support.

Alert sent via text message after a fall

Users should wear the sensor throughout the day for their own safety. The small device can be conveniently attached to the clothing with a clip. If the person does fall despite the training, the sensor sends an alert to the web server via Narrowband Internet of Things (NB-IoT). NB-IoT is an energy-saving radio technology optimized for small data volumes and can be integrated into existing cellular networks. If NB-IoT is not supported, the sensor module simply uses traditional GSM technology. Once the web server receives the alert, it sends a text message to the caregiver, who then knows who exactly has fallen and needs help.

A key benefit of FRADE is that it brings together the different aspects associated with the risk of falling among the elderly. “We combine different tasks: analysis of the risk of falling, prevention through training and the text message alert after a fall – all of these tasks are integrated seamlessly into a single platform,” says Joana Silva. This is why FRADE also benefits hospitals, doctor’s offices, therapy centers and care providers.

FRADE offers yet another advantage: it decentralizes care and support, since people can do their exercises at home.

The AICOS team has been working on this concept since 2015. “We’ve already analyzed the movements of more than 400 volunteers and developed tailored training programs in collaboration with therapists,” explains Silva. To make the sensor and app more user-friendly for the target group, AICOS is planning usability tests with 25 women and men in the coming months.

Use on the go with GPS

Fraunhofer researchers developed both the Android app and the desktop software, while AICOS experts defined the specifications for the wearable device. The University of Porto and the nursing school Escola Superior de Enfermagem do Porto also participated in the project. The European Union supported the project coordinated by AICOS with €75,000 through the EIT Health RIS Innovation Call funding program.

In the next phase, the center in Porto will work on validating the system for use on the go. The sensor could also accompany senior citizens when they go shopping or for a walk. If the sensor registers a fall, it transmits the data to the web server and supplies the position via GPS.

FRADE provides the elderly and their families with peace of mind since it ensures their safety even when they’re home alone.