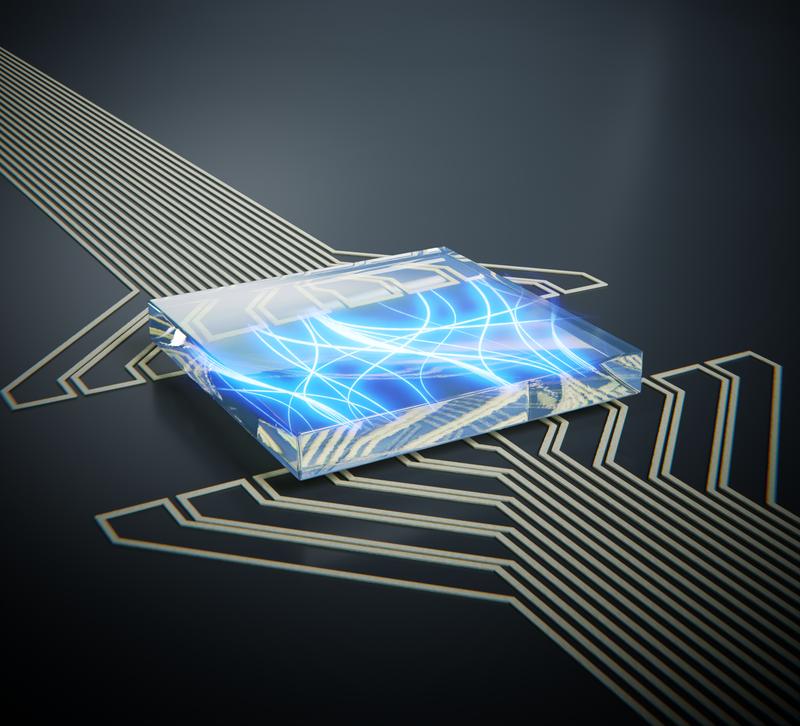 A team of researchers from Delft University of Technology, Leiden University (both in the Netherlands), Tohoku University in Japan and the Max Planck Institute for the Structure and Dynamics of Matter (MPSD) in Hamburg has developed a new type of MRI scanner that can image waves in ultrathin magnets. Unlike electrical currents, these so-called ‘spin waves’ produce little heat, making them promising signal carriers for future green ICT applications. Their work has been published in Science Advances.

MRI scanners can look into the human body in a non-invasive manner. The scanner detects the magnetic fields radiated by the atoms inside, which makes it possible to study the health of organs even though they are hidden underneath thick layers of tissue.

The non-invasive, see-through power of MRI is desirable for many research fields and industries. It could be particularly useful as an imaging tool in nanotechnology and the chip industry. Being able to detect signals in computer chips and other nanodevices would facilitate optimizing their performance and reducing their heat production. However, the millimeter resolution of conventional MRI is insufficient to study chip-scale devices. Now an international research team lead by TU Delft has developed a new method for sensing magnetic waves at the sub-micrometer scale.

The MRI system made by the Delft researchers makes use of a special lattice defect in the crystal structure of diamonds. This defect - known as nitrogen-vacancy (NV) centre - consists of a nitrogen atom sitting next to an empty site in the diamond carbon lattice. “Such an NV centre is essentially an atom-sized magnet that is extremely sensitive to magnetic fields”, TU Delft researcher Toeno van der Sar explains. “As such, NV centres enable high-resolution imaging of the magnetic structure of a sample.”

Spin waves are waves in magnetic materials that are central to the behaviour of magnets. They offer great potential as information carriers because they produce little heat. Their wave nature makes it possible to build logic devices that perform computational tasks using wave interference. However, being able to see the waves is crucial for designing spin-wave devices.

“To image these waves, we used a diamond chip in which we created a layer of NV centres”, Van der Sar explains. “We placed this chip on top of a thin magnetic film in which we excited spin waves using electrodes and microwave currents. The NV centres pick up the magnetic fields generated by the spin waves, enabling high resolution spin-wave imaging.”

The theory team at the MPSD and Tohoku University explained the experimental observations in terms of chiral spin-wave excitation and dipolar-field coupling to the sensor spins. Co-author Tao Yu - a postdoctoral researcher at the MPSD - says: "Just like watching water waves in the lake by eyes, scientists now can directly watch how the spin waves move. These results are the most direct demonstration of spin-wave chirality that deepen our understanding of spin waves dynamics.”

“Chirality is a functionality that has not yet been employed much in spintronics, but could be the basis for a new generation of spin-based devices made from conventional materials.”, adds Gerrit Bauer from Tohoku University. "It is the first experiment that can prove the chirality of the spin waves. These results pave the way for probing spin waves in atomically thin magnets, even when embedded between opaque materials."

The researchers have demonstrated that ‘spin-wave MRI’ allows spin waves to be imaged through opaque materials such as the metal wiring on a chip. Strikingly, the technique is sensitive enough to detect spin waves in magnets that are only a single atom thick. In Van der Sar's view, it will help to pave the way for highly advanced technologies: "As there is currently a push in using ultrathin magnets to create logic devices at the smallest scale, this imaging technique will aid that development."