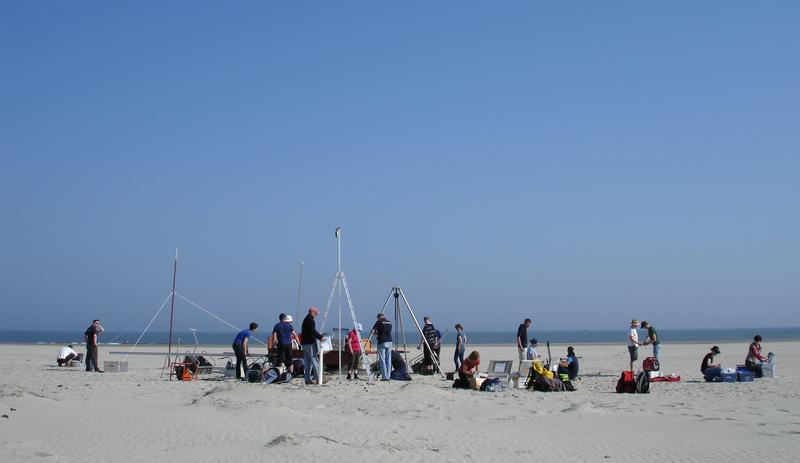 The German Research Foundation is funding a new research group at the University of Oldenburg. The DynaDeep project, led by hydrogeologist Gudrun Massmann, is exploring a largely unknown habitat with a subterranean monitoring network on the island of Spiekeroog.

Beneath the surface of the North Sea's wave-battered beaches, a variety of chemical, geological and microbiological processes are taking place about which little is known to date. This dynamic underground environment where saltwater and fresh groundwater mix and which is referred to by experts as a "subterranean estuary" is the focus of a new research group headed by hydrogeologist Prof. Dr. Gudrun Massmann, who researches and teaches at the University of Oldenburg's Institute of Biology and Environmental Sciences (IBU) and its Institute for Chemistry and Biology of the Marine Environment (ICBM). The project will receive five million euros in funding from the German Research Foundation (DFG) over the next four years. The scientists' primary objective is to assess the role these subsurface processes play in coastal ecosystems and global carbon, nutrient and trace element cycling. To this end, the team plans to set up a subterranean sampling and monitoring network on the coast of the German North Sea island of Spiekeroog, thus expanding the existing infrastructure of the ICBM's "Coastal Observatory Spiekeroog".

"For Oldenburg's marine and environmental scientists, Spiekeroog is a living laboratory for field research. By approving the new research group, the German Research Foundation is honouring the intensive basic research that has been conducted here in recent years," said Prof. Dr. Dr. Hans Michael Piper, President of the University of Oldenburg. "The interdisciplinary collaboration among the participating scientists will significantly advance our knowledge of a largely unknown habitat at the intersection between land and sea."

DynaDeep ("The Dynamic Deep Subsurface of High-Energy Beaches") is the title of the project, and in addition to Massmann's research group scientists from the ICBM as well as partners from the Alfred Wegener Institute, Helmholtz Centre for Polar and Marine Research in Bremerhaven, the Max Planck Institute for Marine Microbiology in Bremen, the Leibniz Institute for Applied Geophysics in Hanover, the Federal Institute for Geosciences and Natural Resources in Hanover and the University of Kiel will also be involved. The team will also have the support of a network of cooperation partners and local actors, including the National Park Administration Wadden Sea of Lower Saxony (NLPV), the research office “Coast” of the Lower Saxony Water Management, Coastal Defence and Nature Conservation Agency (NLWKN) and the municipality of Spiekeroog.

Geoscientists define an estuary as the area where a freshwater river or stream meets the open sea. "Subterranean estuaries are also transition zones between land and sea, but they are located below the surface," Massmann explains. The main focus of the new research group's activities will be "high-energy beaches" like those on the northern side of the East Frisian Islands. A primary characteristic of these beaches is that they are exposed to the full force of strong waves and they have a tidal range of several metres. "Fresh groundwater and seawater mix in the subsurface of these beaches.

Biogeochemical reactions take place here which constantly change the composition of the groundwater," says Massmann. Yet so far little is known about the importance of these underground and dynamic "biogeochemical reactors" for the ecosystems in the transition zone between land and sea, she points out.

The researchers plan to investigate sediment redistribution and groundwater flow patterns and determine how much of the organic matter in the subsurface is degraded by microbes or abiotic processes. The team will also study trace metals and the microbial communities in the subsurface. These communities must be able to adapt to constantly changing living conditions.

The project will be divided into six subprojects in which Massmann and her colleagues conduct field studies, experiments and mathematical modelling. In the first phase of the project, which will last four years, the focus will be on the Spiekeroog site, where an underground sampling and monitoring network is to be set up, the “Subterranean Estuary Online Observatory”. Innovative Sensors installed in groundwater measuring points will record variables such as electrical conductivity, pressure, temperature, and oxygen and nitrate concentrations at brief intervals. This will enable the researchers to continuously monitor the groundwater flow and biogeochemical reactions in the subsurface.

The team also plans to install a pole as an instrumentation platform in the intertidal zone, which generally dries out at low tide. From here, changes in the beach's surface and the motion of sediment can be monitored. Outside the storm surge season, a container located at the foot of the sand dunes will be used to transmit data from sensors, store equipment and also serve as an information point for the public. Geophysical, hydrochemical and microbiological field campaigns will also take place on a regular basis, supplementing the data gathered at the permanent installations.

The team then plans to test the findings from the first phase at other locations. "The underground, dynamic bioreactors in this transition zone between land and sea presumably differ fundamentally from all other habitats in the deep underground, whether continental or under the ocean," Massmann explains. "Our ultimate goal is to significantly improve the current understanding of how this unique environment functions and to develop a general concept that can be transferred to other high-energy beaches."