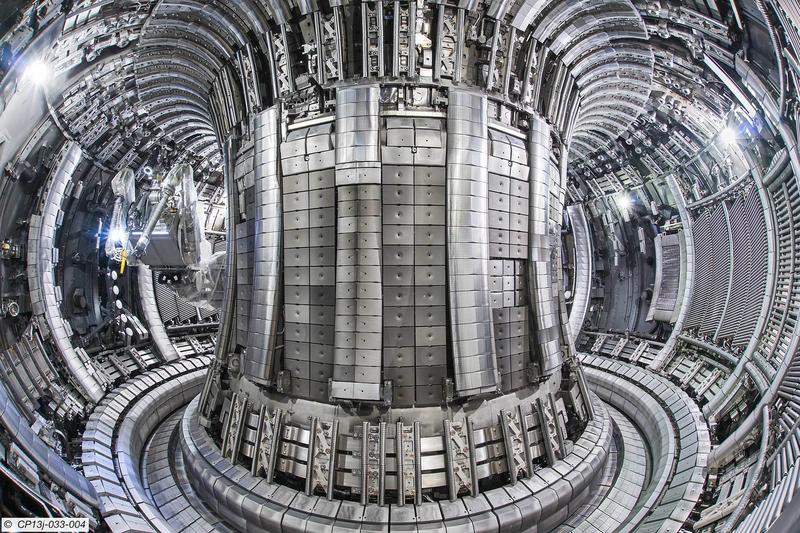 Plasma experiments that generate fusion energy are planned for next year at the Joint European Torus JET, the world's largest fusion device at Culham/UK. Scientists of Max Planck Institute for Plasma Physics (IPP) at Garching have contributed intensively to the preparations. Today, JET is the only device that can experiment with the fuel of a future fusion power plant.

In the European fusion research programme, the JET tokamak has the task of studying plasmas near ignition. This fusion device, the largest in the world, today is the only one that can experiment with the fuel of a future fusion power plant, the two hydrogen species deuterium and tritium, i.e. heavy and superheavy hydrogen. All other devices work with test plasmas of light hydrogen or deuterium.

In the first deuterium-tritium campaign in 1991, JET succeeded in releasing energy through nuclear fusion for the first time in the history of fusion research. For a duration of two seconds, the plasma delivered a fusion power of 1.8 megawatts. In 1993, JET was equipped with a new component – a so-called divertor – following the example of ASDEX and ASDEX Upgrade at IPP. In the second deuterium-tritium campaign in 1997, with a different mixing ratio of the fuels, JET increased the fusion power to 16 megawatts. This corresponds to more than half the heating power applied. For a net gain in energy, however, the JET plasma is too small. This is the task of the international experimental reactor ITER, which is currently being built in Cadarache in southern France.

From 2009 to 2011, the former carbon cladding of the plasma vessel was replaced by a mixture of beryllium and – again modelled on ASDEX Upgrade – tungsten. The same materials are also planned for ITER. Tungsten is more resistant than carbon, which, moreover, stores too much hydrogen. However, the metallic wall places high demands on the quality of plasma operation. For this, the expansion of the neutral-particle plasma heating was required, which since recently has been able to feed a good 30 megawatts into the plasma.

Subsequently, throughout the year 2020, under the changed wall conditions extensive work was carried out with plasmas of deuterium to develop the appropriate plasma scenarios for the third deuterium-tritium campaign. The group of about one hundred scientists responsible for this perfecting of operating modes was headed by Dr. Jörg Hobirk and Dr. Athina Kappatou from IPP and two other researchers from fusion laboratories in Belgium and the UK. The results – stable high-power plasmas in deuterium for about five seconds – give confidence for the coming tritium operation.

The main aim of the third deuterium-tritium campaign is to obtain data for preparing experiments with the ITER test reactor. “These investigations are of great importance”, states Jörg Hobirk, “because the previous JET values, which are used in preparation of the ITER experiments, were not achieved with an ITER-like metal wall, but with a carbon wall.”

Experiments will start in pure tritium. Although little energy will be released, “this offers the unique opportunity to compare the properties of tritium and deuterium plasmas and to study the influence of the isotope effect on the plasma behaviour, for example on the turbulence in the plasma or the density and temperature profiles”, says Jörg Hobirk. After careful evaluation, the third and final deuterium-tritium campaign will start at JET in the second half of the year.

Background
JET was jointly designed and built by the members of the European fusion programme and has been operated jointly since 1983. The English “Culham Centre for Fusion Energy” in Culham near Oxford is responsible for the technical operation, while temporarily seconded scientists and technicians from the laboratories of the European fusion programme EUROfusion work on the device. With numerous secondments, IPP is an important participant in the JET programme.