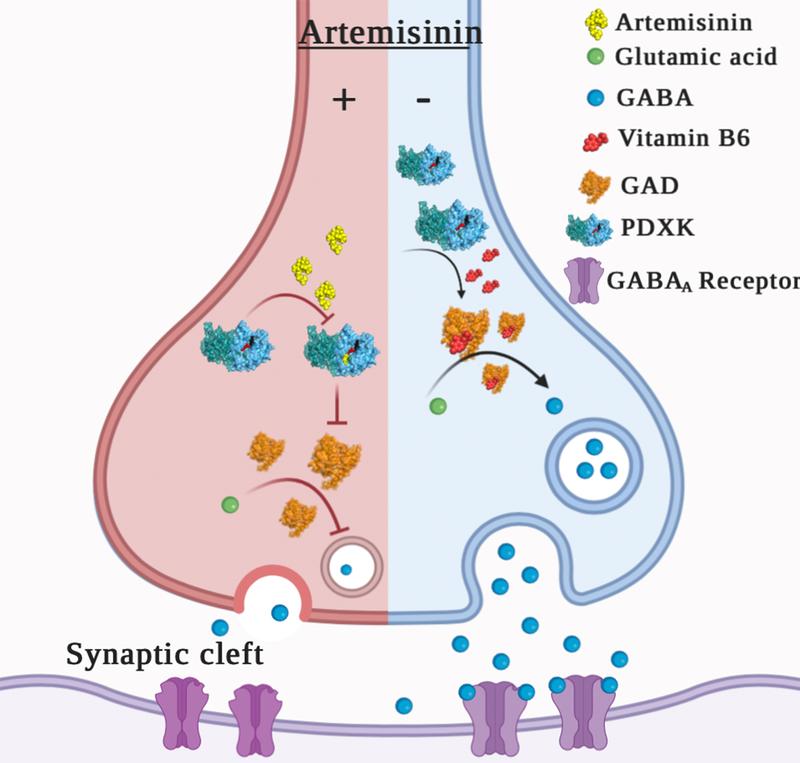 In this diagram of a presynaptic neuron the active compound artemisinin (yellow) prevents the production of the neurotransmitter GABA (blue). In the absence of artemisinin (on the right), the metabolism is intact resulting in the production of GABA. | Copyright: AG Schindelin, Rudolf-Virchow-Zentrum | Download

Artemisinins are pharmaceutical compounds used against the pathogen that causes malaria. However, these substances also have multiple targets in humans which may either be pharmacologically exploited or result in undesirable side effects. Recently, scientists from Würzburg have been able to elucidate one of the underlying molecular mechanisms by showing how these drugs inhibit the vitamin B6 generating enzyme in humans. The results were published in the scientific journal PNAS.

Gamma-aminobutyric acid (GABA) is the principal inhibitory neurotransmitter and plays a crucial role in the human brain. The anti-malarial drug artemisinin affects the production of this neurotransmitter, as the research group of Prof. Dr. Hermann Schindelin from the Rudolf Virchow Center for Integrative and Translational Bioimaging at the University of Würzburg recently demonstrated. In the current study, the structure of an artemisinin derivative, bound to its molecular target, the enzyme pyridoxal kinase (PDXK), was elucidated. In addition, in collaboration with research groups from the University of Würzburg and the University of Erlangen, the scientists described in detail the mechanism of inhibition of GABA biosynthesis in neuronal cells.

The production of GABA

Neurotransmission takes place at synapses, the contact points between two neurons. The synapse is formed by a presynaptic cell, which produces and releases the neurotransmitter, while the postsynaptic cell contains the corresponding receptors in apposition, thus allowing the transmission of the signal from the presynaptic cell once the neurotransmitter bound to the receptor in the postsynaptic cell.
In the presynaptic cell, the neurotransmitter GABA is produced by the enzyme glutamic acid decarboxylase (GAD). In order to work, this enzyme requires vitamin B6 as the cofactor, which, in turn, is synthetized by the enzyme PDXK. Using X-ray crystal structure analysis, the scientists showed that the binding site of artemisinins partially overlaps with the substrate binding site, thus preventing the vitamin B6 precursor from binding. "We also examined the enzymatic reaction of PDXK and showed that the formation of the co-factor vitamin B6 is inhibited and thus indirectly also the synthesis of the neurotransmitter GABA," explains Anabel Pacios-Michelena, PhD student in the research group, and one of the two first authors of this study. "Vitamin B6 deficiency is associated with numerous neurological and metabolic disorders, which further underlines the importance of this enzymatic reaction and a finely tuned production of vitamin B6 in humans" emphasizes Vikram Babu Kasaragod, a former postdoc in the research group and also the first author of this and the previous study which determined the first structure of artemisinin with a target protein.

In collaboration with the neurobiology groups, the researchers treated neurons with artemisinin and found that the lower levels of vitamin B6 led to a significantly reduced activity of the enzyme GAD in neurons. "Together with our study recently published in the journal Neuron describing the influence of artemisinin at inhibitory postsynapses, we now understand how artemisinin interferes with signal transmission in the brain" states Hermann Schindelin.

People
Dr. Vikram Babu Kasaragod did research as a PhD student and postdoctoral researcher in the group of Prof. Schindelin at the Rudolf Virchow Center for Integrative and Translational Bioimaging. He is now an EMBO Long-term postdoctoral fellow, working in the group of Radu Aricescu at the MRC Laboratory of Molecular Biology in Cambridge, UK.

Dr. Anabel Pacios-Michelena is a postdoctoral researcher in Prof. Schindelin's group at the Rudolf Virchow Center for Integrative and Translational Bioimaging.

Prof. Dr. Herman Schindelin is head of a research group at the Rudolf Virchow Center for Integrative and Translational Bioimaging.

The Rudolf Virchow Center for Integrative and Translational Bioimaging is a central institution of the University of Würzburg. The multidisciplinary research groups of the Center are dedicated to decipher disease-causing factors at all levels of biology, from the atomic structure of proteins, to individual cells, to complete tissues, using state-of-the-art methods and imaging techniques.