A pair of lonely planet-like objects born like stars 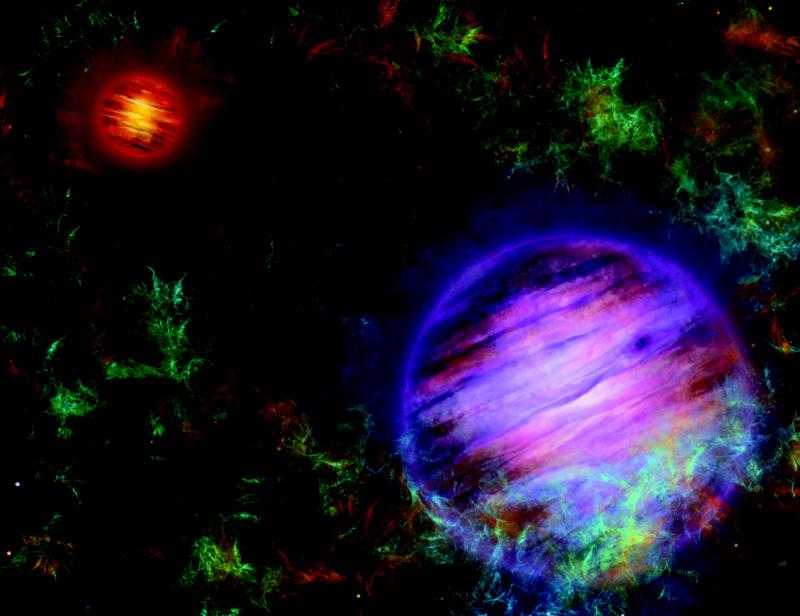 Artist's composition of the two brown dwarfs, in the foreground Oph 98B in purple, in the background Oph 98A in red. The two objects are surrounded by the molecular cloud in which they were formed. | Quelle: Illustration: Thibaut Roger | Copyright: © University of Bern | Download 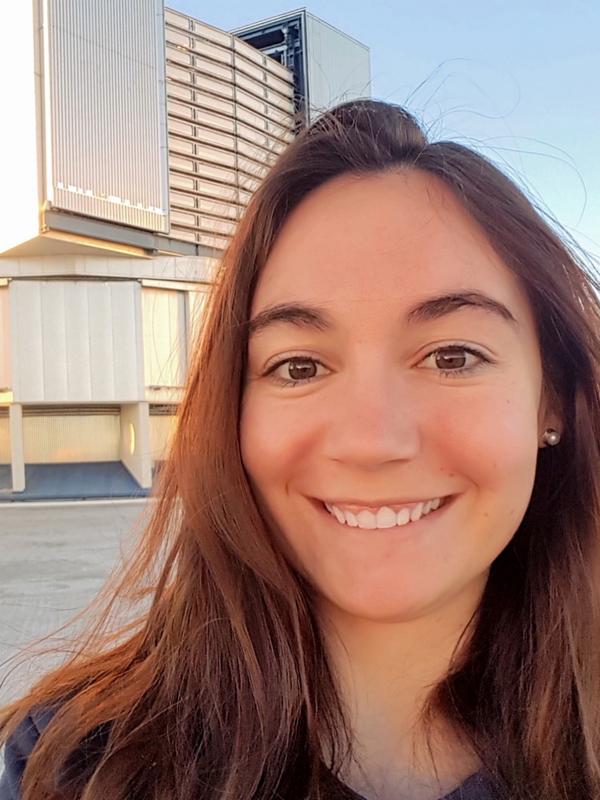 An international research team led by the University of Bern has discovered an exotic binary system composed of two young planet-like objects, orbiting around each other from a very large distance. Although these objects look like giant exoplanets, they formed in the same way as stars, proving that the mechanisms driving star formation can produce rogue worlds in unusual systems deprived of a Sun.

Star-forming processes sometimes create mysterious astronomical objects called brown dwarfs, which are smaller and colder than stars, and can have masses and temperatures down to those of exoplanets in the most extreme cases. Just like stars, brown dwarfs often wander alone through space, but can also be seen in binary systems, where two brown dwarfs orbit one another and travel together in the galaxy.

Researchers led by Clémence Fontanive from the Center for Space and Habitability (CSH) and the NCCR PlanetS discovered a curious starless binary system of brown dwarfs. The system CFHTWIR-Oph 98 (or Oph 98 for short) consists of the two very low-mass objects Oph 98 A and Oph 98 B. It is located 450 light years away from Earth in the stellar association Ophiuchus. The researchers were surprised by the fact that Oph 98 A and B are orbiting each other from a strikingly large distance, about 5 times the distance between Pluto and the Sun, which corresponds to 200 times the distance between the Earth and the Sun. The study has just been published in The Astrophysical Journal Letters.

The pair is a rare example of two objects similar in many aspects to extra-solar giant planets, orbiting around each other with no parent star. The more massive component, Oph 98 A, is a young brown dwarf with a mass of 15 times that of Jupiter, which is almost exactly on the boundary separating brown dwarfs from planets. Its companion, Oph 98 B, is only 8 times heavier than Jupiter.

Components of binary systems are tied by an invisible link called gravitational binding energy, and this bond gets stronger when objects are more massive or closer to one another. With extremely low masses and a very large separation, Oph 98 has the weakest binding energy of any binary system known to date.

Discovery thanks to data from Hubble

Clémence Fontanive and her colleagues discovered the companion to Oph 98 A using images from the Hubble Space Telescope. Fontanive says: “Low-mass brown dwarfs are very cold and emit very little light, only through infrared thermal radiation. This heat glow is extremely faint and red, and brown dwarfs are hence only visible in infrared light.” Furthermore, the stellar association in which the binary is located, Ophiuchus, is embedded in a dense, dusty cloud which scatters visible light. “Infrared observations are the only way to see through this dust”, explains the lead researcher. “Detecting a system like Oph 98 also requires a camera with a very high resolution, as the angle separating Oph 98 A and B is a thousand times smaller than the size of the moon in the sky,” she adds. The Hubble Space Telescope is among the few telescopes capable of observing objects as faint as these brown dwarfs, and able to resolve such tight angles.

Because brown dwarfs are cold enough, water vapor forms in their atmospheres, creating prominent features in the infrared that are commonly used to identify brown dwarfs. However, these water signatures cannot be easily detected from the surface of the Earth. Located above the atmosphere in the vacuum of space, Hubble allows to probe the existence of water vapor in astronomical objects. Fontanive explains: “Both objects looked very red and showed clear signs of water molecules. This immediately confirmed that the faint source we saw next to Oph 98 A was very likely to also be a cold brown dwarf, rather than a random star that happened to be aligned with the brown dwarf in the sky.”

The team also found images in which the binary was visible, collected 14 years ago with the Canada-France-Hawaii Telescope (CFHT) in Hawaii. “We observed the system again this summer from another Hawaiian observatory, the United Kingdom Infra-Red Telescope. Using these data, we were able to confirm that Oph 98 A and B are moving together across the sky over time, relative to other stars located behind them, which is evidence that they are bound to each other in a binary pair”, explains Fontanive.

An atypical result of star formation

The Oph 98 binary system formed only 3 million years ago in the nearby Ophiuchus stellar nursery, making it a newborn on astronomical timescales. The age of the system is much shorter than the typical time needed to build planets. Brown dwarfs like Oph 98 A are formed by the same mechanisms as stars. Despite Oph 98 B being the right size for a planet, the host Oph 98 A is too small to have a sufficiently large reservoir of material to build a planet that big. “This tells us that Oph 98 B, like its host, must have formed through the same mechanisms that produce stars and shows that the processes that create binary stars operate on scale-down versions all the way down to these planetary masses”, comments Clémence Fontanive.

With the discovery of two planet-like worlds – already uncommon products of star formation – bound to each other in such an extreme configuration, “we are really witnessing an incredibly rare output of stellar formation processes”, as Fontanive describes.

Bernese space exploration: With the world’s elite since the first moon landing

When the second man, "Buzz" Aldrin, stepped out of the lunar module on July 21, 1969, the first task he did was to set up the Bernese Solar Wind Composition experiment (SWC) also known as the “solar wind sail” by planting it in the ground of the moon, even before the American flag. This experiment, which was planned and the results analysed by Prof. Dr. Johannes Geiss and his team from the Physics Institute of the University of Bern, was the first great highlight in the history of Bernese space exploration.
Ever since Bernese space exploration has been among the world’s elite. The numbers are impressive: 25 times were instruments flown into the upper atmosphere and ionosphere using rockets (1967-1993), 9 times into the stratosphere with balloon flights (1991-2008), over 30 instruments were flown on space probes, and with CHEOPS the University of Bern shares responsibility with ESA for a whole mission.