Physics breakthrough of the year 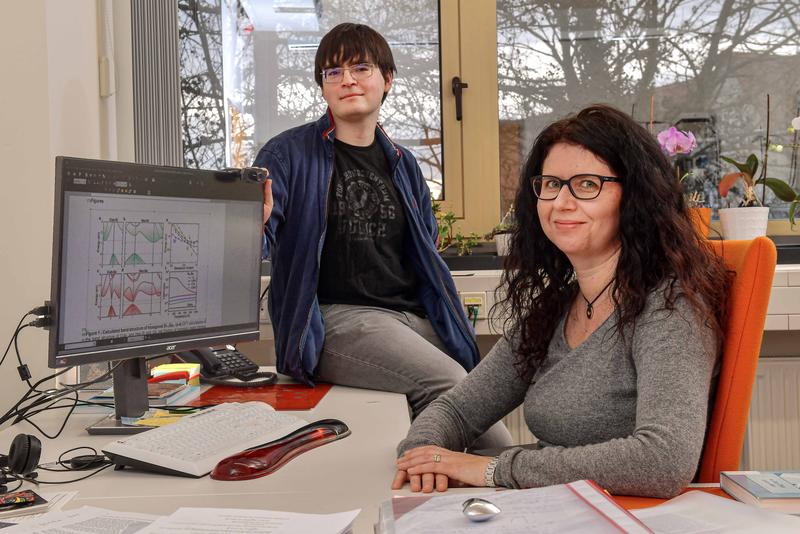 For the development of a light-emitting silicon alloy, researchers from TU Eindhoven, Netherlands and the University of Jena, Germany together with partners from the University of Linz and TU Munich, are today (17 December) being awarded the “Breakthrough of the Year” prize by Physics World magazine. In its paper, published in April 2020, the team, which includes Jens René Suckert and Prof. Silvana Botti of the University of Jena, shows for the first time that silicon alloys are suitable for emitting photons on a significant scale, thus paving the way for silicon lasers that could revolutionise optical data processing.

“Our work enables for the first time the production of silicon-based photonic computer chips that can work significantly faster with a strongly reduced energy consumption than previous electronic chips,” says Prof. Silvana Botti, explaining the importance of the development. Such microchips, which communicate with light particles (photons) instead of electrons, need an integrated laser that produces the photons directly on the chip. Until now, however, the semiconductor material silicon has been considered an extremely weak emitter of light. The reason for this is the symmetry of its electronic energy states. In order to emit photons, that is to say light, electrons in the semiconductor have to “jump” from an excited state – the conduction band – into a lower-energy state – the valence band. “However, in the silicon crystal, these two bands are offset from each other in such a way that the electron transfer is difficult,” explains Jens René Suckert, who is one of the lead authors of the award-winning paper. Therefore, this indirect band gap, as it is called, has so far prevented efficient photon emmission from silicon.

In the alloy, silicon changes its crystal structure

To get around this problem, the team was inspired by a 50-year-old theory and modified the crystal structure of silicon in a way that makes the band gap direct. For the first time, the researchers have succeeded in making alloys of silicon and germanium grow into a hexagonal crystal structure instead of its usual cubic lattice, which enhances the probability of obtaining transitions from the conduction band to the valence band. In their paper published in the scientific journal Nature, the researchers were able to show that in this crystal structure, silicon emits light efficiently.

For the research, which was carried out as part of the EU project SiLAS, the Jena physicists provided the calculations of the electronic properties of the silicon-germanium nanowires being studied.

“The award of the most important breakthrough of the year in physics research is a great confirmation of how important innovations can arise from the combination of theoretical and experimental research,” says a delighted Silvana Botti. As the current paper shows, experimental physics benefits from the calculations provided by theoretical physics. “Together, theory and experiment can lead to real breakthroughs,” adds Botti. The professor of theoretical solid-state physics also hopes that the award will win over students and perhaps motivate one or two to apply for a Master’s or doctoral programme in physics research at the University of Jena. As the current award clearly shows, the university is very well positioned internationally.