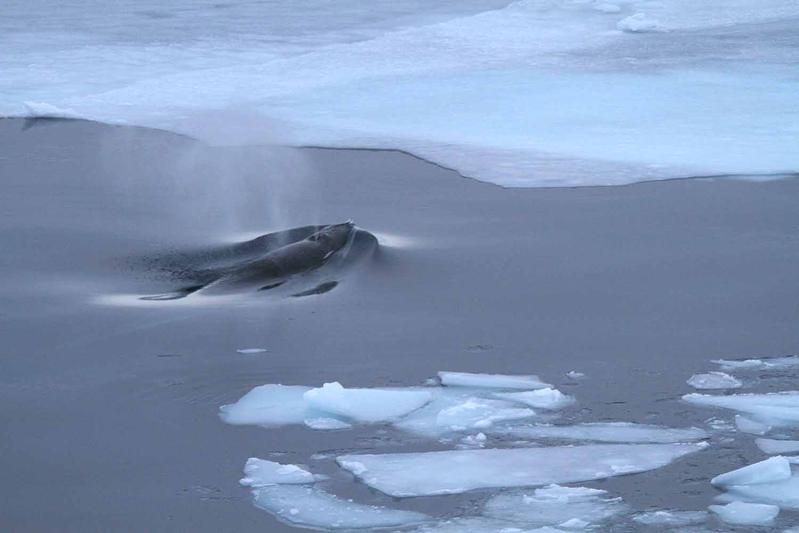 Bremerhaven, 17 December 2020. Until recently, what we knew about the lives of baleen whales in the Southern Ocean was chiefly based on research conducted during the Antarctic summer. The reason: in the winter, there were virtually no biologists on site to watch for the animals. Experts from the Alfred Wegener Institute, Helmholtz Centre for Polar and Marine Research (AWI) have now used permanently installed underwater microphones, which have been recording for the past nine years, to successfully gather and analyse whale observation data from the Weddell Sea. The audio recordings offer unique insights into the lives of humpback whales and Antarctic minke whales. They show e.g. that there are most likely two humpback whale populations in the Weddell Sea, both of which avoid the sea ice and call or sing most frequently in the autumn. In contrast, Antarctic minke whales primarily live in ice-covered regions and produce their characteristic quacking sounds in the winter, as the researchers report in two studies recently published in the online journal Royal Society Open Science. Their goal: for the new findings to help improve protective measures for these baleen whales and their main food source, the Antarctic krill.

Antarctic minke whales (Balaenoptera bonaerensis) are still a mystery to marine biologists, who don’t know how many of these whales there are, or where exactly they live, mate and give birth to their calves. A few years ago, however, it was discovered that Antarctic minke whales produce certain characteristic sounds. These calls, which often sound a bit like the quacking of a duck, provide incontrovertible proof of the presence of the small whales, which measure up to eleven metres in length.

AWI biologist Diego Filun and his team are now using these sounds in the first-ever comprehensive, long-term observation of Antarctic minke whales in the Weddell Sea. “We’ve been monitoring our underwater microphones for nine years. They were deployed at 21 points throughout the Weddell Sea and along the prime meridian, allowing us to record the whales’ acoustic activities in regions where research vessels rarely venture. Thanks to the recordings, we now finally understand in what parts of the Weddell Sea the minke whales prefer to be at different times of year, and know that at least some of them stay there for the winter and don’t migrate to warmer waters,” Filun explains.

The recordings from 2008 to 2016 show that, in summer and winter alike, Antarctic minke whales tend to stay in those regions of the Weddell Sea that are covered with sea ice. Yet the frequency of their calls appears to change with the season: they can be heard far more often in the autumn and winter months (April to October) than in the summer months (December to March). In addition, the acoustic observations call into question certain previous assumptions: “On aerial survey flights over the Weddell Sea in the summer, minke whales were primarily sighted near the sea-ice edge and less frequently in areas with thick sea ice. But our audio recordings showed just the opposite: the minke whales were rarely found in the marginal ice zone, and much more often under thick ice – most likely in an attempt to avoid their archenemies, killer whales,” Filun reports.

In contrast, the humpback whales (Megaptera novaeangliae) of the Weddell Sea don’t seek shelter below the ice. On the contrary! As the second hydroacoustic study, led by AWI biologist Elena Schall, determined, the baleen whales avoid ice-covered regions. Instead, they venture to the north of the ice edge on the hunt for Antarctic krill, which can be found in especially large swarms in the Weddell Sea and waters north of it.

“Our audio recordings from 2013 indicate that at least two humpback whale populations come to the Weddell Sea in summer to build up their fat reserves. Whales from South Africa seem to go hunting at the eastern edge, near the prime meridian. But humpbacks from South America tend to stay in the northern coastal waters of the Antarctic Peninsula, and can be heard until later in the year than their counterparts to the east,” explains first author Elena Schall.

In both groups, some of the animals don’t begin the long trek to the north at summer’s end, and instead overwinter in the ice-free regions of the Weddell Sea. At the same time, the recordings indicate that, in the summer, the humpbacks move southward as the ice retreats, but only go as far as is absolutely necessary to find sufficient food.

Essential information for successful marine protection in the Antarctic

“If we want to protect the unique biotic communities of the Weddell Sea in the long term, we need to know as precisely as possible how many baleen whales come to the Atlantic sector of the Southern Ocean in search of food, what regions they hunt in, whether they overwinter there, and how much krill is needed for the whales to find sufficient food. In this regard, long-term acoustic observations are a vital tool, because they offer us a far more detailed picture of life below the water than the handful of scientific whale sightings alone,” says Dr Ilse van Opzeeland, an AWI biologist and co-author of both studies.

The team now hopes that the findings from the new studies will be taken into account in future discussions on the establishment of a marine protected area in the Weddell Sea, especially in terms of limiting krill fishing to ensure that there is still enough food for all marine fauna.

In the meantime, the experts will continue to analyse their wealth of underwater recordings. First of all, they’ll seek to determine the purpose of Antarctic minke whales’ unusual ‘quacking’; in addition, there are initial indications that the humpback whales’ recorded songs and calls could be used to discover why they leave the Weddell Sea much earlier or later than normal in certain summers, or the conditions under which they sometimes don’t return to the Weddell Sea at all when winter ends. Understanding these behavioural patterns would mean a major step forward for the AWI’s marine biologists.

The two studies mentioned here were released under the following titles in the online journal Royal Society Open Science:

Your contact partners at the Alfred Wegener Institute are:

Due to the current coronavirus-based workplace regulations, the experts may be working from home. Accordingly, we ask that you please submit any interview requests by E-Mail (with Communications and Media Relations in cc); we will call you back as soon as possible.

If you have any further questions, Ulrike Windhövel (tel. +49 471 4831 2008; e-mail: media(at)awi.de) at the AWI’s Communications and Media Relations Department will be happy to help you.