Another milestone in the search for neutrinoless double-beta decay 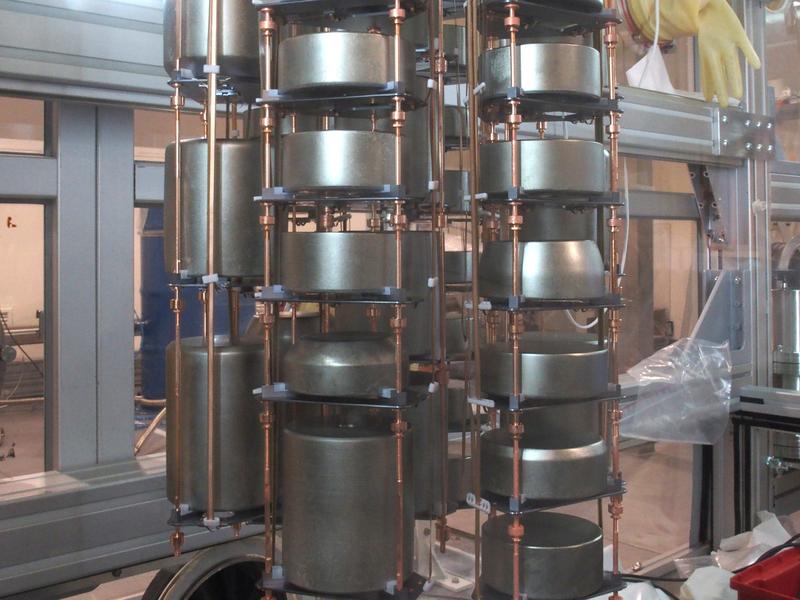 The GERmanium Detector Array (GERDA) experiment at the Laboratori Nazionali del Gran Sasso (LNGS) of INFN, Italy, has reported its final results on the search for the neutrinoless double-beta (0νββ) decay of germanium-76 in the recent issue of Physical Review Letters [1]. No signal has been observed, but all goals of the final phase of the experiment have been achieved.

According to the final result of GERDA, the lower limit for the half-life of the neutrinoless double-beta decay (0νββ) of 76Ge is 1.8 × 10exp26 years. This value coincides with the expected value for the sensitivity of the experiment; a more stringent value for the decay of any 0νββ isotope has never been measured before. Similarly, the reported background rate of 5.2 × 10exp-4 counts/(kg∙yr∙keV) in the signal region is second to none in the field, demonstrating not only the feasibility of a background-free experiment at high exposure but also providing the foundation for a next-generation experiment with significantly higher sensitivity.

The hypothetical 0νββ decay is a process beyond the Standard Model of Particle Physics: two neutrons within a nucleus, here 76Ge, transform simultaneously into two protons and two electrons (“beta particles”) without the common emission of two anti-neutrinos. Its detection would have profound implications for particle physics and cosmology: establishment of lepton number violation and the Majorana nature of neutrinos, i.e. the identity of neutrinos and antineutrinos, access to the neutrino mass scale and an important clue for understanding why there is so much more matter than antimatter in the Universe.

A little more than 50 years ago, lepton number violation had been, indeed, already the issue of the first 0νββ decay search with a 0.1 kg germanium detector chosen by a Milano group because of its outstanding intrinsic energy resolution [2]. Since then, the sensitivity has been increased by a factor of one million. Essential to this track record was the continuous increase of the mass of the detector which simultaneously is the source of the decay, and by increasing the 76Ge isotope fraction from 7.8% in the natural Ge detectors via enrichment up to almost 90%. This was accompanied by the incessant reduction of the background in the signal region, in particular by running the experiments deep-underground for reducing the background from cosmic rays.

The GERDA experiment has been operated since 2011 at the Laboratori Nazionali del Gran Sasso of INFN, Italy, below a rock over-burden of 3500 m water equivalent. In its final phase, GERDA deployed 41 germanium detectors with a total mass of 44.2 kg and a 76Ge enrichment of 86-88%. Pioneering features were the key to progress: other than in the previous Ge experiments, the Ge detectors were operated without encapsulation in a cryostat of ultrapure liquid argon (LAr), immersed in an instrumented water tank as shield against photons, neutrons and muons. The LAr provided both cooling as well as shielding; furthermore, it helped to reduce the amount of mounting material that, despite of careful screening, always exhibits a tiny rest of radioactive contaminants. For active shielding, the LAr was instrumented with light detectors which could indicate if a signal in the Ge detectors arose from radioactive background. Similar information can be gained from the time profile of the Ge detector signals. The GERDA collaboration has deployed detectors of novel design and developed new analysis tools in order to take full advantage of this background suppression technique.

The experience from GERDA has led to the expectation that further background reduction is in reach so that a background-free experiment with an even larger source strength resp. exposure becomes possible. The LEGEND collaboration [3] is aiming at increasing the sensitivity to the half-life of the 0νββ decay up to 10exp28 years. In a first phase, it will deploy a mass of 200 kg of enriched Ge detectors in the slightly modified infrastructure of GERDA with the start of data taking to be in 2021.