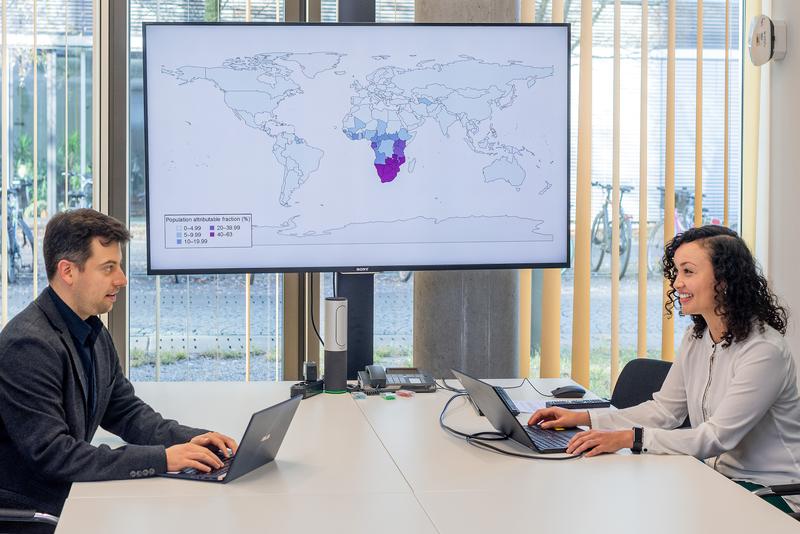 Women infected with HIV are six times more likely to develop cervical cancer. This is what Dr. Dominik Stelzle and Dr. Luana Tanaka found out as part of a study by the Center for Global Health. | Quelle: Andreas Heddergott / TUM

A research team at the Technical University of Munich (TUM) has quantified the effects of an infection with the Human Immunodeficiency Virus (HIV) on the development of cervical cancer. Their results show that the risk of developing cervical cancer is six times higher in women who are infected with HIV. Southern and Eastern Africa are particularly affected.

According to WHO statistics, cervical cancer is the fourth most common type of cancer for women. In 2018 an estimated 570,000 women worldwide were diagnosed with cervical carcinoma, with approximately 311,000 of these women dying.

On the other hand cervical cancer, usually caused by Human Papillomavirus (HPV), is also one of the most successfully preventable and treatable types of cancer, as long as it is detected at an early stage and treated effectively.

Cervical cancer is at the same time the most frequently detected cancer for women who live with HIV, since their immune systems are weakened by the HIV infection.

The TUM School of Medicine's Center for Global Health and the Chair of Epidemiology at the TUM Department of Sport and Health Sciences have now dedicated their efforts to this relevant topic in the publication "Estimates of the Global Burden of Cervical Cancer Associated with HIV", published in the renowned journal The Lancet Global Health.

Systematic review and meta-analysis of 24 studies

The lead authors Dr. Dominik Stelzle (Center for Global Health and Chair of Epidemiology) and Dr. Luana Tanaka (Chair of Epidemiology) conducted a systematic review as well as a meta-analysis of a total of 24 studies from the years 1981 to 2016, in which 236,127 women with HIV from four continents (Africa, North America, Asia and Europe) participated.

"Until now there have only been estimates from countries with high net income levels," says Dr. Stelzle. "That's why we looked at the figures on global incidence of cervical carcinoma in connection with an HIV infection and included estimates for countries with low net incomes. In most parts of the world the numbers are under five percent. In some countries however we're talking about well over 40 percent of cases."

Risk is six times higher for women with HIV

The objective of the study was to calculate the share of women living with HIV among the number of women with cervical cancer. The authors found that 5.8 percent of all new cervical cancer cases worldwide in the year 2018 were diagnosed for women with an HIV infection. This is equivalent to 33,000 cases a year, 85 percent of which occurred in Sub-Saharan Africa.

Furthermore, based on their results the team was able to show that women with HIV have a sixfold higher risk of developing cervical cancer than women without HIV infection.

Southern and eastern Afrika most affected

The regions most strongly affected are southern and eastern Africa, where respectively 63.8 percent and 27.4 percent of cervical carcinomas were diagnosed in women with an HIV infection.

"With over 75 percent, Eswatini in southern Africa is the country with the highest share of women suffering from cervical cancer in connection with an HIV infection, followed by Lesotho with 69 percent, Botswana with 67 percent, South Africa with 64 percent and Zimbabwe with 52 percent," says Dr. Tanaka.

Based on the results, the TUM authors determined that women with an HIV infection have a significantly higher risk of developing cervical cancer. They also pointed out that this means that HPV vaccinations and early-stage cervical carcinoma screenings are of particular importance, especially in the African countries south of the Sahara.

"Although cervical cancer screenings already exist in Africa, until now they have been performed primarily on women with a higher socio-economic status who could afford the screening," says Prof. Stefanie Klug, who holds the Chair of Epidemiology at TU Munich. "The goal has to be to end this dependency on economic means and to succeed in introducing free HPV vaccination for girls and screening for adult women."

The publication is the result of a collaborative effort by the Center for Global Health (Department of Neurology) of the TUM School of Medicine, the Chair of Epidemiology of the TUM Department of Sport and Health Sciences, the London School of Hygiene and Tropical Medicine, the University of Edinburgh, the University of Glasgow, the International Agency for Research on Cancer (IARC) and the World Health Organization (WHO). The project received funding from the WHO using financing from the United States Agency for International Development (USAID) and the U.S. President’s Emergency Plan for AIDS Relief (PEPFAR).