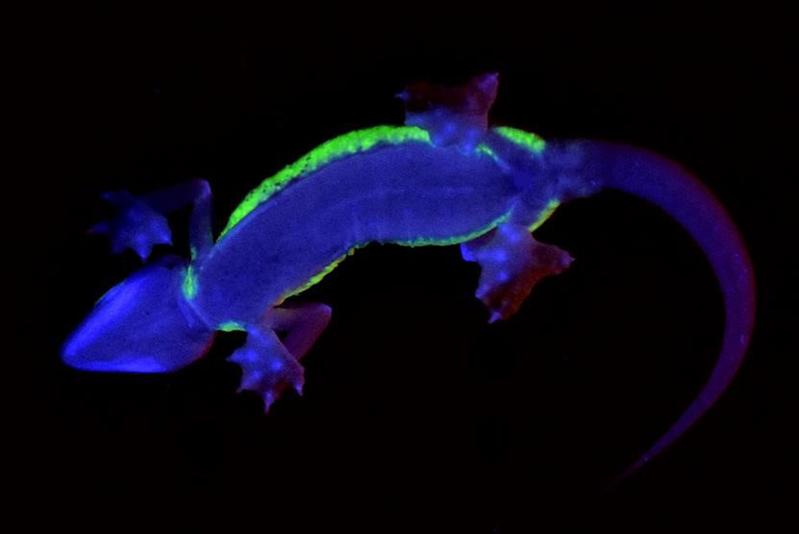 From below, both the web-footed gecko’s characteristic feet, as well as the distinctly distributed fluorescent areas become visible (under UV-light at a maximal wavelength of 365 nm). | Quelle: David Prötzel | Download 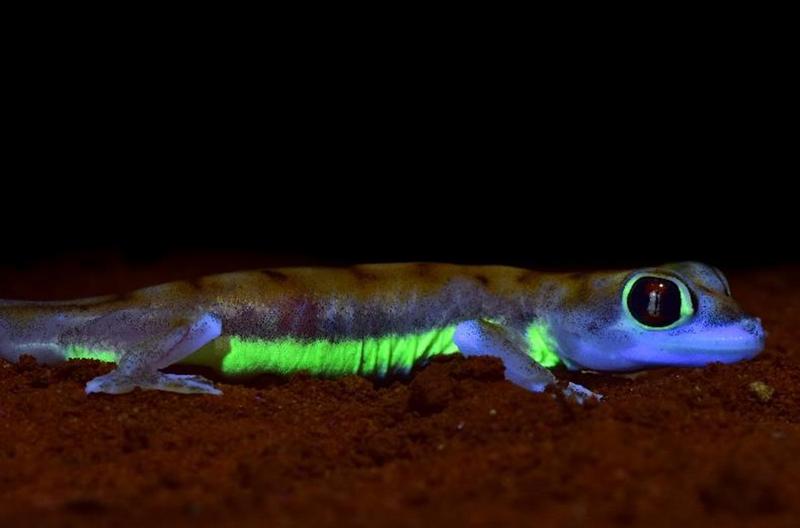 The web-footed gecko (Pachydactylus rangei) from the Namib desert fluoresces neon-green along its flank and around the eye under strong UV-light (365 nm). This signal is best recognisable from the gecko’s point of view. | Quelle: David Prötzel | Download
❮ ❯

Researchers at the Bavarian State Collection of Zoology (SNSB-ZSM), the LMU and Hochschule München have discovered that the web-footed gecko Pachydactylus rangei from Namibia fluoresces neon-green under UV light in a stripe along its flank and around its eye. These markings, best visible from the perspective of a gecko, presumably serve as a means to recognise geckos in the Namib desert. In their study, the researchers showed that this fluorescence is produced by iridophores (special pigment cells). The mechanism, as well as the brightness of the fluorescence, are unique and unprecedented among terrestrial vertebrates. The study was published today in the journal Scientific Reports.

Biofluorescence is known from many aquatic organisms, but has recently been increasingly discovered in terrestrial vertebrates as well. So far, two fluorescence mechanisms have been described from reptiles and amphibians: bone-based fluorescence (all bone is naturally fluorescent under UV light), and fluorescence of a chemical in secreted and circulated in lymph fluid. “As soon as we discovered this fluorescence, we realised that the web-footed geckos must use a new mechanism: the bright, neon-green fluorescence patterns were clearly produced in the skin of the lizards”, explains Dr David Prötzel, first author on the study.

Histological study of the web-footed gecko Pachydactylus rangei revealed, that the fluorescent areas of the skin are full of special pigment cells, the iridophores, which are absent in the non-fluorescent areas of the skin. Iridophores reflect light, and play an important role in the colouration of geckos and other lizards. For the first time, this study revealed that some iridophores can also fluoresce. “This effect is much stronger than the bone-based fluorescence that we discovered in chameleons three years ago and one of the brightest known cases of fluorescence ever found in terrestrial vertebrates,” says Dr Frank Glaw, curator of Reptiles and Amphibians at the Bavarian State Collection of Zoology.

The moon is the only source of light during the nightly forages of these geckos in the deserts of Namibia. The blue component of the moonlight is absorbed by the geckos’ skin and emitted again as a brighter-looking, neon-green light. As though someone has taken a highlighter to these flanks, these geckos have a brightly visible signalling stripe.

Why so many animals fluoresce under blue or UV light is largely unclear. “In many vertebrates, it seems that fluorescence is purely coincidental. In the case of the web-footed gecko, however, the brightness of the fluorescence, and its placement on the body, strongly suggests that the fluorescence is a signal visible to other geckos, perhaps even over substantial distances in the open desert,” explains Dr Mark D. Scherz, evolutionary biologist at the University of Potsdam.