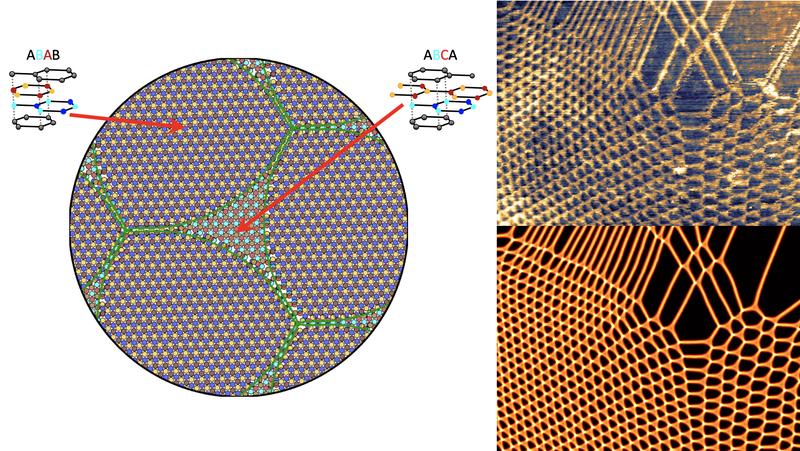 When two atomically thin layers of a material are stacked and twisted slightly on top of one another, they can develop radically different properties. They may become superconducting or even develop magnetic or electronic properties due to the interaction of their two layers. The challenge for scientists is to find out precisely what happens in these ultra-thin double layers – and how these changes can be induced and tuned. Now a research team from the United States and Germany has developed a groundbreaking method to map the interaction between such layers. The work on their new concept, ‘moiré metrology’, has been published in Nature Communications.

When two layers of a material are stacked and twisted, they form a large-scale periodic structure, called a moiré superlattice. The research team from Columbia and Harvard Universities in the United States and the Max Planck Institute for the Structure and Dynamics of Matter in Hamburg and RWTH Aachen explored the atomic landscape and the subtle features of such moiré lattices to gain a better understanding of these systems.

The team developed moiré metrology as a combined experiment-theory framework and applied it to three representative twisted systems: bilayer graphene, double bilayer graphene and H-stacked MoSe₂/WSe₂. Through various imaging techniques and detailed modelling, the researchers deciphered material information imprinted in moiré superlattices and gained information about the interaction between the layers that was not accessible thus far by other means. However, moiré metrology is not limited to a given material system, but can be used across the field of twisted bilayer structures.

At the heart of moiré metrology lies the notion of relaxation. When two atomic layers are placed one on top of the other they do not remain still. In fact, they behave more like deformable membranes, and they stretch and compress in search of stable configurations, based on the interaction between the layers. The authors of this study claim that the information about the interaction is imprinted on top of fine spatial patterns that emerge after the atomic relaxation. They further demonstrate how this information can be extracted for the studied cases, and provide constraints that can guide the future modelling of these systems.

The unprecedented reported sensitivity can be understood from the description of the moiré superlattice in terms of a geometric interference pattern of the lattices of the two layers. So just as minute changes between two paths can be resolved by studying the interference pattern of light traveling across each of them (as was remarkably done in the LIGO experiment, for instance), here sub-atomic shifts in atomic position are projected to a measurable large scale spatial pattern.

Beyond the theoretical implications, the team also developed relaxation simulation tools which can help with the modelling and design of non-uniform strain fields in realistic devices. They show remarkable agreement with the experimental results.

The experimental measurements and theoretical modelling were developed and
performed by scientists at Columbia University with theoretical support from the MPSD Hamburg, RWTH Aachen University and Harvard.