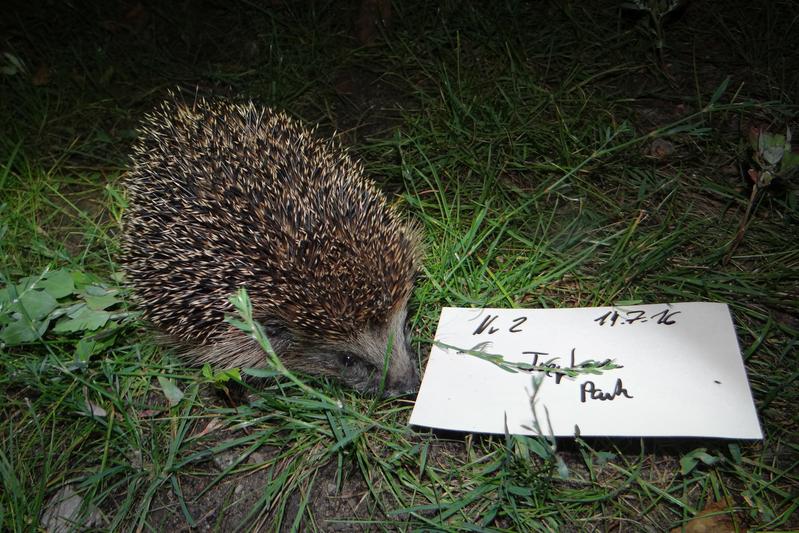 Hedgehogs live both in the countryside and larger cities. As populations continue to decline, especially in rural areas, most hedgehogs in central Europe are now urban dwellers. To efficiently protect these populations, the suitability of their traits and life histories for life in human-dominated habitats need to be better understood. The new special issue on "applied hedgehog conservation research" of the scientific journal "Animals", co-edited by Dr Anne Berger of the Leibniz Institute for Zoo and Wildlife Research (Leibniz-IZW), fills an important part of this research gap.

One of the new research results published in the special issue: Hedgehogs are not very mobile, yet despite considerable barriers in the cityscape, such as roads or waterways, they do not become isolated from each other and still function as one population. This was indicated by sufficient gene flow and a lack of genetic population structure of the hedgehogs in Berlin. The authors conclude that both green spaces and corridors in the city on the one hand and translocations by hedgehog carers on the other are key to the gene flow and thus to the resilience of local hedgehog populations.

For this article, scientists from the Leibniz-IZW analysed the genome of 143 Berlin hedgehogs. A cluster analysis of the genetic information revealed three genetic groupings, which the scientists attributed to direct genealogical relationships. “Once we have accounted for these direct family groups in the analysis, then there is only one single genetic cluster across the whole of Berlin,” says Prof Dr Jörns Fickel, head of the Leibniz-IZW Department Evolutionary Genetics and senior author of the paper. So, despite considerable barriers for hedgehogs in the cityscape – such as fences, roads, bodies of water or railway lines – there are no genetically isolated populations in Germany’s capital city. “This 'Berlin mix' has two possible causes,” says co-author Dr Anne Berger, scientist and hedgehog specialist in the Leibniz-IZW Department Evolutionary Ecology. “On the one hand, the large amount of green spaces in Berlin could provide sufficiently well-connected habitat for hedgehogs, so that exchange remains possible even for hedgehogs – which are only mobile to a limited extent. On the other hand, the work of hedgehog rescue centres in the city may play a significant role as they care for hundreds, if not thousands, of hedgehogs and frequently release them in a different location from the one where they were picked up.” In order to determine this more precisely, the team of authors suggests that information on the locations where hedgehogs are found and released by hedgehog rescue centres should be systematically recorded.

This paper is one of 14 articles in a special issue of the journal „Animals” that focuses on the human impact on hedgehogs. “In the current era of the Anthropocene the world is substantially shaped by human activities. The existence of just about every wildlife species depends on the extent to which the individuals of that species can come to terms with man-made conditions – and on the extent to which humans have enough interest and knowledge to grant that wildlife species a habitat that meets its living requirements,” says Berger, who co-edited the special issue with Dr Nigel Reeve. “In the case of hedgehogs, we know much about their natural way of life, but as far as their responses, adaptations and their limits to the various human influences are concerned, we are still at the beginning of research. It is precisely these investigations that are essential for effective and sustainable conservation measures for the increasingly threatened hedgehogs.”

In addition to the paper on gene flow in the Berlin hedgehog population, the special issue also contains an investigation into the effects of supplementary human feeding on hedgehog hibernation behaviour, an analysis of the effects of traffic fatalities on hedgehog populations and on protective measures to reduce road mortality and thus on reducing the risk of spatial isolation of hedgehog populations, and a 17-year retrospective of the causes of mortality of wild hedgehogs in Portugal. “In addition, we also showed for the first time that the nocturnal hedgehogs prefer to move through dark areas and avoid artificial light at night,” Berger said, pointing to another paper from the Leibniz-IZW in the special issue. “This knowledge could be used to reconnect isolated populations through hedgehog-proof dark corridors.” The special issue is available online in its entirety, and the scientific articles can be read free of charge by all hedgehog conservation stations and helpers, thus hopefully contributing significantly to evidence-based species conservation.