A trap for nematodes 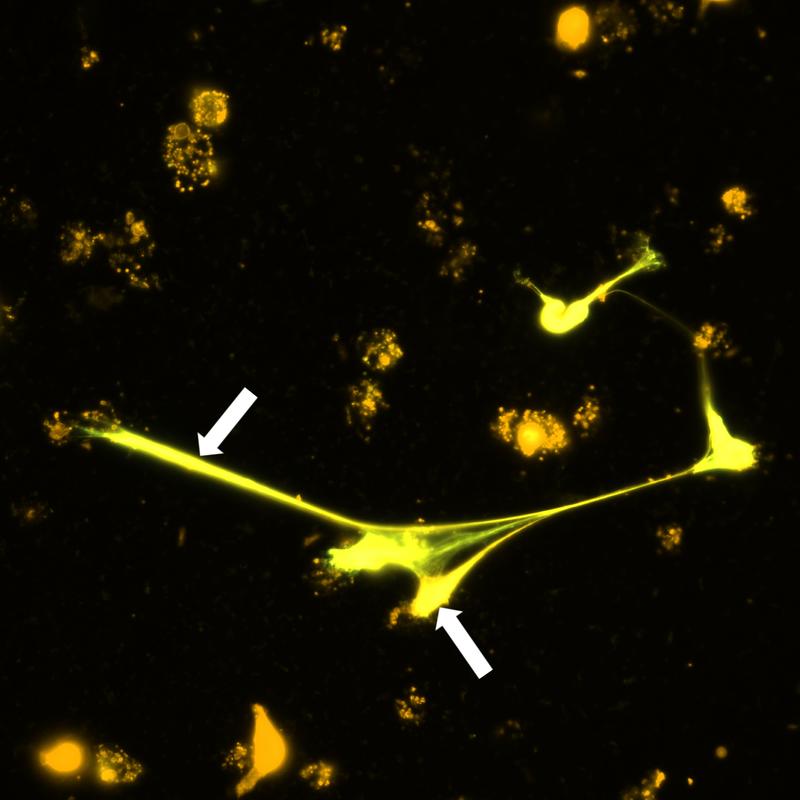 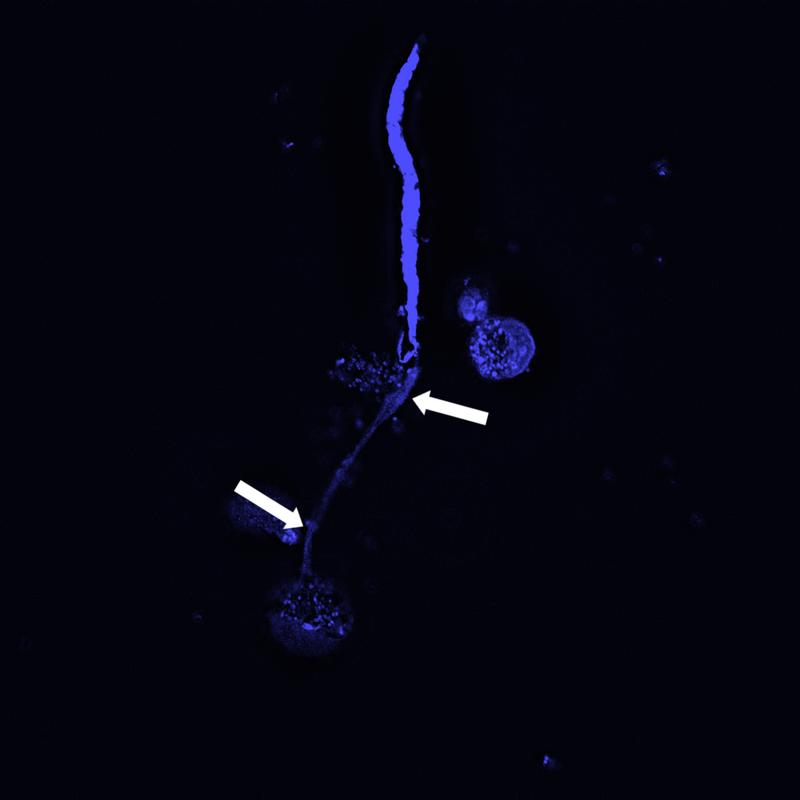 Filariae, sometimes up to 70 centimeters long nematodes, can set up residence in their host quite tenaciously and cause serious infectious diseases such as river blindness or elephantiasis, which belong to the so-called neglected tropical diseases (NTDs) and are found in about 80 million peoplein the tropics. Researchers led by the University of Bonn have now investigated a mechanism by which the immune system attacks the filariae. Certain immune cells, the eosinophil granulocytes, release DNA that forms a kind of web around the larvae and traps them. The researchers also identified which protein "turns on" the mechanism, known as the Dectin-1 receptor.

Filariae, slender but sometimes up to 70 centimeters long nematodes, can set up residence in their host quite tenaciously and cause serious infectious diseases in the tropics. The tiny larvae of the worms are usually transmitted from person to person by mosquitoes, which pick up the larvae from the blood or subcutaneous tissue when they bite and deposit them in the vessels or tissues of their next victim. Researchers led by the University of Bonn have now investigated a mechanism by which the immune system attacks the filariae. Certain immune cells, the eosinophil granulocytes, release DNA that forms a kind of web around the larvae and traps them. The researchers also identified which protein "turns on" the mechanism, known as the Dectin-1 receptor. The study has been published in the journal Cell Reports.

At first, the nematodes release the larvae directly in the tissues of their host; these are less than a millimeter in size and are therefore called microfilariae. But to continue developing and become infectious, the larvae need the help of mosquitoes. These ingest the host microfilariae with the blood meal. The larvae continue to develop in the insect's body and re-enter humans with the next bite. Filariae can cause severe diseases such as river blindness or elephantiasis (extreme lymphatic swelling in the legs and/or testicles), which belong to the so-called neglected tropical diseases (NTDs) and are found in about 80 million people there.

To investigate which mechanisms the immune system uses against such invaders, in their study the researchers took a closer look at certain immune cells, the eosinophil granulocytes. These cells get their name from the red dye eosin, with which they can be stained. "Eosinophil granulocytes are known to offer a protective effect in filarial infections. However, the exact mechanism was not known until now," says study leader Prof. Marc P. Hübner from the Institute of Medical Microbiology, Immunology and Parasitology at the University Hospital Bonn and the German Center for Infection Research (DZIF).

The methods by him the researchers included molecular biology and immunofluorescence microscopy to determine and measure the occurring DNA. Using cell cultures, they found that eosinophils reacted to nematode larvae - the cells produced DNA, which then spun around the larvae outside the cell like a web. This meant that the larvae could move only with difficulty or not at all and were thus rendered harmless. The mechanism occurred both in released larvae (first larval stage) and in more developed larvae at an already infectious stage (third larval stage). This could reduce the spread of the parasites, because the transmitting insects subsequently encounter fewer microfilariae. In addition, the infective larvae transmitted by the insect are more effectively controlled in the final host.

A subsequent experiment with mice also confirmed the researchers' observation that DNA webs enhance the removal of microfilariae. Conversely, mice lacking eosinophil granulocytes did not form DNA webs against larvae.

The mechanism by which immune cells develop such DNA webs is called ETosis - ET stands for extracellular traps. The process of ETosis has been known for some time, but has so far been investigated mainly in other immune cells, the neutrophil granulocytes.

But what makes cells recognize the threat of larvae and release DNA webs? The researchers concluded that it is a specific protein on the cell surface, the Dectin-1 receptor. When the cells come into contact with the worm larvae, it is set in motion and triggers the mechanism, which consists of a series of successive signals. The researchers were also able to identify the parts of the cell from which the released DNA originates: The primary source are the mitochondria, the "power plants" of the cells. But DNA was also fed into the webs from the cell nucleus, where it was released by biochemical changes.

"Our results demonstrate that eosinophil ETosis is a conserved mechanism. This is demonstrated by the fact that both human and animal eosinophil granulocytes are able to release their DNA when they come into contact with filariae of different species," emphasizes lead author Dr. Alexandra Ehrens from the University of Bonn.

The results of the study may in future contribute to finding strategies against the spread of diseases caused by filariae. In follow-up studies, the researchers want to investigate the relevance of the discovered defense mechanism for the control of such filariae in Africa.

In addition to the University of Bonn and the DZIF in Bonn, the study was conducted by the Muséum National d'Histoire Naturelle in Paris (France) and the company Elanco Animal Health in Monheim. Marc Hübner is also a member of the Transdisciplinary Research Area (TRA) "Life and Health" at the University of Bonn. In six different TRAs, scientists from a wide range of faculties and disciplines come together to work on future-relevant research topics.

The study received financial support from the German Research Foundation (DFG) and the ImmunoSensation2 Cluster of Excellence at the University of Bonn, which is funded by the DFG, as well as the Jürgen Manchot Foundation.