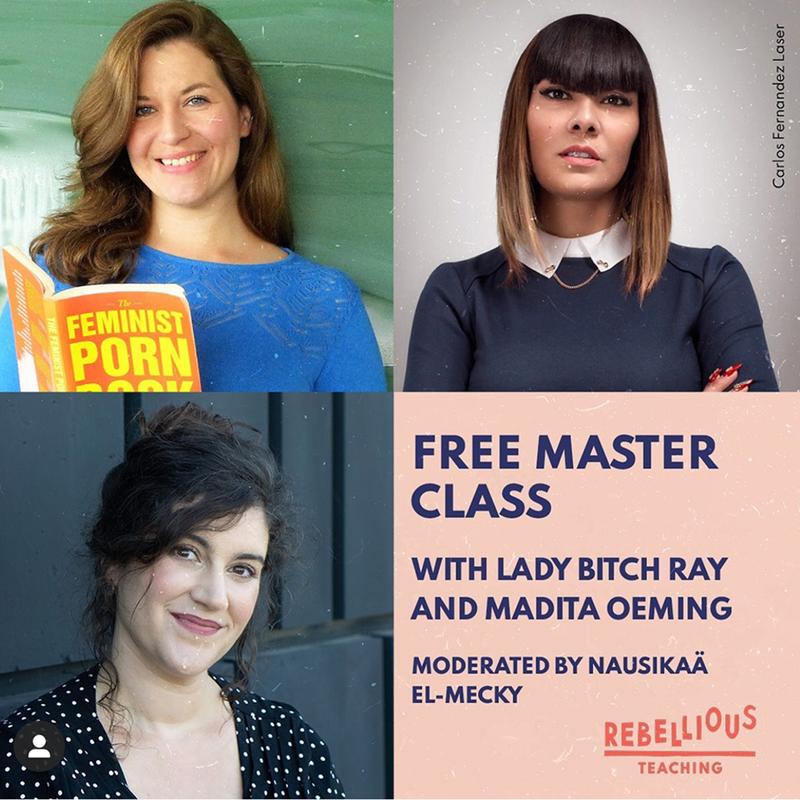 Be calm and poised – and don’t get too personal, you do want people to take you seriously,
don’t you?

In academia, there’s a kind of behaviour we’re supposed to adhere to. Especially women and people of colour may feel particularly pushed to ‘compensate’ for not being eminent, male, white professors. How many of us have – consciously or unintentionally – taken up mannerisms that do not fit our personality at all, but make us seem more ‘respectable’ somehow?

In our second Masterclass, moderated by Rebellious Teaching founder Nausikaä El-Mecky, Lady Bitch Ray and Madita Oeming will discuss the advantages and challenges of refusing to put on a typical academic ‘mask’: We will discuss the freedom but also the friction this can cause – ways of dealing with criticism and prejudice – and how to remain resilient and open at the same time.

The Masterclass is there to inspire, to provide tools and courage to try out new ways of being – and discover new possibilities as an educator. After all: the way we are influences our teaching immensely.

Dr Reyhan Şahin aka Lady Bitch Ray
Dr Reyhan Şahin, also known to many as "Lady Bitch Ray", is a scientist, former rapper, performance artist, fashion designer, education consultant and author. She studied general linguistics, German language and literature and sex education in Bremen and received her doctorate in linguistics in 2012 on the system of meaning of the Muslim headscarf in Germany. Her dissertation "The meaning of the Muslim headscarf" is the first comprehensive study in this field and was awarded the German Study Prize in 2013. She is currently researching the topics of the alt right, racism, Islamophobia, anti-Semitism and gender. She also conducts hip hop research as a hobby. In 2012, she published her feminist pamphlet "Bitchsm" (VS-Verlag /Panini Books), in which she dealt with intersectional (queer) feminist topics such as Islamic feminism, hip hop and feminism in Germany at an early stage and related them to her own biography.
Her most recently published books are: "Yalla, Feminismus!" (9/2019 Tropen/Klett Cotta) and "Lady Bitch Ray über Madonna" (04/2020 Kiepenheuer&Witsch)

Nausikaä El-Mecky
Nausikaä El-Mecky leads the project Rebellious Teaching at Die Junge Akademie ¬ to which she was elected as a member in 2017. She is tenure track professor in History of Art & Visual Culture at Universitat Pompeu Fabra, Barcelona, specialising in attacks on art – from iconoclasm to self-censorship – in historical and contemporary settings, particularly investigating the unexpected and self-contradictory aspects of the limits of creative freedom. She is also dedicated to developing artistic and innovative approaches to teaching and science communication, from creating immersive environments to participatory experiments. After obtaining her PhD in Art History from the University in Cambridge in 2013, she held postdoctoral fellowships at Humboldt University Berlin and Heidelberg University before starting her current position in Barcelona in 2018. She was awarded the Maria Gräfin Award for original contributions to the humanities in 2017 and won a Stifterverband / InnoSci FutureLab fellowship in 2020 with Rebellious Teaching.

About “Rebellious Teaching”
“Rebellious Teaching” is a growing community of educators, artists, activists, researchers and anyone else interested in using subversive, edgy methods to teach. We believe that inclusivity and creativity are fundamental parts of education, and that everyone can be an educator. We are not tied to any particular discipline or educational form, welcoming all unusual approaches to teaching in any setting: from primary school to university, from museum to zoom conference. The real-world experiences from our community of rebellious teachers show that much more is possible than we might think – and that support for breaking the rules can come from where you least expect it. “Rebellious Teaching” is a Junge Akademie project led by Nausikaä El-Mecky, founded in December 2019. Since than, it has been developing ties to professional and potential educators from all over the world, and has been featured in, among others, The Scotsman, Deutschland Funk and Bayerischer Rundfunk.