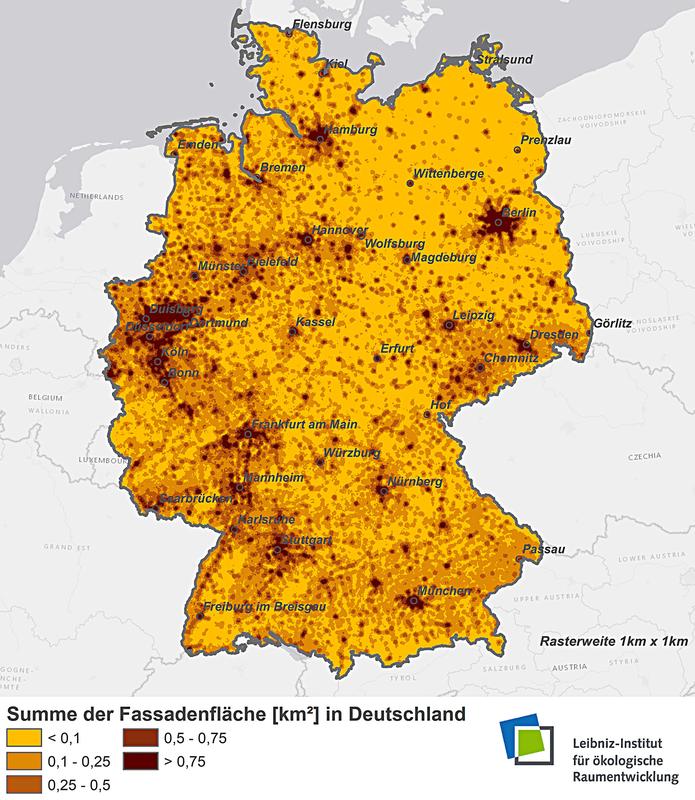 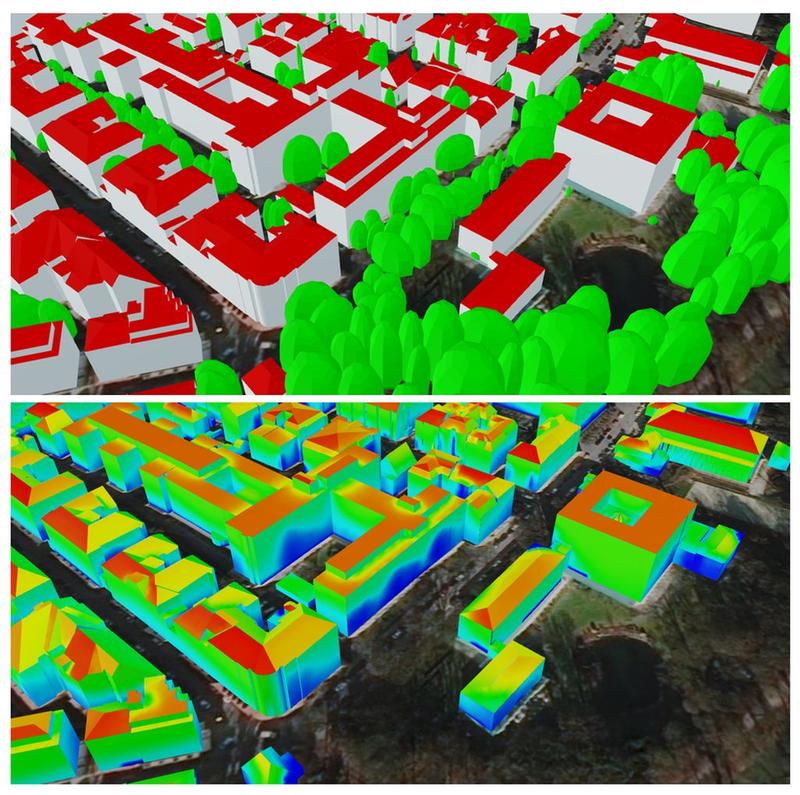 Roofs are not the only suitable places for installing photovoltaic modules to generate electricity from the sun’s rays. Facades could also play a much more significant role in Germany’s energy transition towards renewables as well as helping to reduce land consumption for energy parks. Together with the Fraunhofer ISE, the Leibniz Institute of Ecological Urban and Regional Development has calculated the potential area of Germany’s building facades for the installation of PV systems. It is twice as large as that of roofs. They published their findings in the journal "Transforming Cities".

Solar panels have long been a common sight on German rooftops. In many towns and cities, solar cadastres provide information about the capacity for generating power from such roof-based systems. Local authorities even provide incentives to encourage residents to install PV modules on their roofs. But what about the facades of buildings? How much useful surface area do they offer for the generation of renewable energy?
A potential area of 12,000 square kilometres – at least in theory
"To achieve the German government’s goal of climate neutrality in the building stock by 2050, it will not be enough simply to install solar systems on all suitable roofs in Germany," explains Dr Martin Behnisch of the Leibniz Institute of Ecological Urban and Regional Development (IOER). Determined to explore another solution, the IOER investigated the solar capacity of facades. Working in close cooperation with scientific partners such as the Fraunhofer Institute for Solar Energy Systems (ISE), the Weimar Institute of Applied Construction (IAB), the Chair of Geoinformatics at the Technical University of Munich as well as with business partners from the solar power industry, the resulting Standard BIPV project was funded by the Federal Ministry for Economic Affairs and Energy. Based on official geodata, the team led by Martin Behnisch of the IOER investigated the potential area offered by Germany’s building facades for installing building-integrated photovoltaics (BIPV).

The findings are impressive. As Dr Martin Behnisch explains: "The potential area is estimated to be around 12,000 square kilometres of facade in contrast to just under 6,000 square kilometres of roofing." This means that building facades offer about twice the capacity for photovoltaic modules as roofs, equalling about half the territory of Mecklenburg-Western Pomerania. Yet Behnisch is cautious: "We have to emphasise that these are still just theoretical values."

Calculations based on national geodata

The results are still somewhat tentative as they are based on data that, in part, greatly simplifies the real-world conditions. For their study, the researchers analysed a 3D model created by the Federal Agency for Cartography and Geodesy (BKG) which provides information on Germany’s entire stock of buildings. Each house is modelled as a simple block with a flat roof. Detailed roof shapes and resulting gable walls, windows, doors or projecting elements such as balconies and other features are not reflected in the building model. Further, the model does not consider whether a building is of historic value or possesses a valuable façade design. On the other hand, the research team’s estimate does disregard buildings whose facades are touching and therefore are unsuitable for the installation of photovoltaics. In addition, detailed analyses were carried out on three target areas, namely the cities of Munich, Freiburg and Dresden, as well as on a nationwide sample of 100,000 buildings.

In close cooperation with a team led by Prof. Thomas H. Kolbe from the Technical University of Munich, IOER researchers modelled and visualised the solar radiation falling on all roof and facade surfaces in order to precisely determine the small-scale potential yield of solar energy. To do this, the team not only made use of detailed building models featuring individual roof designs; the calculations also took into account the surroundings such as trees and the shade they cast or shadows caused by other buildings as well as the local topography and any nearby mountains.

Improved planning of photovoltaics on buildings

The results are various visualisations of the potential surface area for PV modules and potential solar energy yields in Germany. For example, the spatial distribution of potential areas shows us that the capacity for building-integrated photovoltaic modules is particularly high in locations with dense populations. This is the case, for example, in the Rhine-Main, Rhine-Neckar and Rhine-Ruhr conurbations, as well as in the urban centres of Berlin, Hamburg, Bremen, Munich or the Saxon urban triangle of Dresden-Leipzig-Chemnitz.

When concrete building types are considered in the modelling of solar energy yields, it becomes clear that the facades of large buildings such as production halls, educational institutions or public buildings are particularly suitable for installing PV systems. But according to Martin Behnisch: "Large residential complexes such as high-rise buildings are also good locations for the installation of photovoltaics."

The IOER project team sees their findings as a first step towards the improved planning of power generation on buildings. Martin Behnisch again: "Our data still has to be specified for individual sites through more precise analyses. But it does give an impression of the great potential that can be tapped through building-integrated photovoltaics. These are important starting points, especially with a view to meeting targets for reduced CO2 emissions." In view of the transport revolution away from fossil fuels and the challenges of e-mobility, it makes sense for us to generate more clean energy in cities. Furthermore, there are also advantages for environmental protection. "Every photovoltaic module that we install on a house facade helps to preserve nature and precious soil by avoiding the construction of huge photovoltaic power stations."

In the Standard BIPV project (Development of a Prefabricated Standard BIPV Facade for Selected Building Categories in Germany), the project partners identified suitable building categories that could be fitted with prefabricated, standardised BIPV façade. Further, they implemented an initial exemplary upgrade. On the one hand, the aim was to identify suitable building types with large facades for solar power generation. On the other hand, photovoltaic facade elements were developed in the course of the project with a cost-effective design for mass production and which can be easily assembled/installed and are sufficiently attractive.

The project, which runs from January 2017 to March 2021, is funded by the Federal
Ministry for Economic Affairs and Energy (BMWi) (funding reference number:
0324063). In a follow-up project, the topics will be investigated further until August
2023.