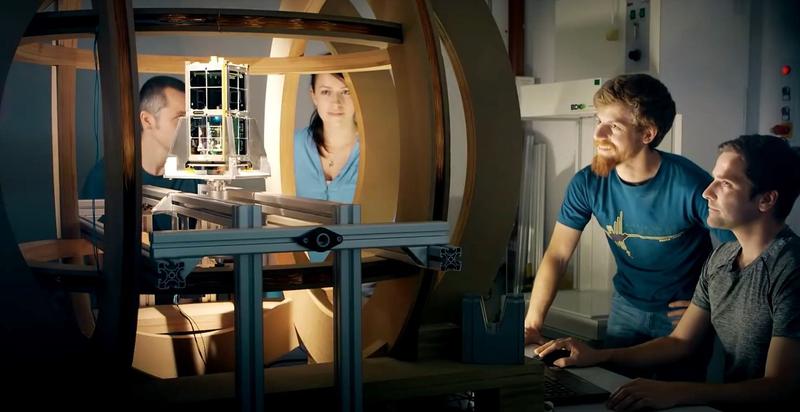 On January 22, fingers are crossed for a successful launch of the American SpaceX Falcon-9 rocket from the launch site in Cape Canaveral (Florida). On board will be several scientific experiments of the Institute of Aerospace Engineering at TU Dresden on the specially developed nanosatellite SOMP2b. It will be used to investigate new nanomaterials under the extreme conditions of space, to test systems for converting the sun's heat into electricity and to precisely measure the residual atmosphere around the satellite.

SOMP2b will begin its journey around the Earth at an altitude of 500 km - slightly higher than the ISS space station. It will orbit the Earth in a special polar, sun-synchronous orbit, always flying over the TU Dresden ground station at approximately the same time of day and sending measurement data.

SOMP2b is a follow-up satellite to SOMP2, a nanosatellite jointly developed by students, PhD candidates and scientists from TU Dresden’s Faculty of Mechanical Science and Engineering. "SOMP2b" stands for Student On-Orbit Measurement Project Number 2b. It is 20 cm x10 cm x10 cm in size and weighs a little less than 2 kilograms. SOMP2b will orbit the Earth so fast that it will see sunrise and sunset 16 times a day. This will be accompanied by extreme temperature changes and will be particularly challenging for the materials and electronics. Particle radiation from space, low pressures, and the residual particles in the atmosphere surrounding SOMP2b at high velocities put additional stress on the nanosatellite.

This is where science comes in: "We want to test innovative nanomaterials under these extreme conditions in space. The knowledge gained will help us to better understand the material properties and should be applied into new applications in the future. We are developing new types of protective films against electromagnetic radiation in motor vehicles or medical technology," explains Dr. Tino Schmiel, who heads the Satellite Systems and Space Sciences research field at the Institute of Aerospace Engineering. Furthermore, the scientists are trying to provide more electrical energy in the nanosatellite. The constant temperature change is to be used to generate electrical energy by means of thermoelectric materials even in the shadow phase without the sun. "Such thermoelectric materials are also interesting for terrestrial applications: in principle, anywhere where waste heat is lost without being used," Schmiel added.

As with several of the institute's previous missions, the new satellite is again equipped with the small FIPEXnano sensor system, which measures residual oxygen molecules in space at a minimum of 600°C in the so-called thermosphere. In this zone, which is located at an altitude of 80 to 600 kilometers, gas temperatures of 1000 degrees occur. So far, too little is known about the dynamics of the composition of this atmospheric layer. FIPEXnano thus makes an important contribution to atmospheric and climate modeling.

The scientists working significantly with Dr. Tino Schmiel on SOMP2b can hardly wait for the first signals. "Shortlyafter the upper stage of the Falcon 9 rocket has released the satellite at an altitude of 500 kilometers, the SOMP2b activates itself, the solar cells charge the batteries and the systems start operating," says Yves Bärtling, SOMP2b's lead development engineer. The first state data can then hopefully be received and recorded during the overflights over the TU Dresden ground station. The stakes are high because SOMP2b is also an experimental satellite. "We are testing a completely new type of construction," explains Tino Schmiel, "We have miniaturized almost all of the functions of a satellite so that they fit in just one side panel. This creates space for more scientific experiments." The special feature here is that the side walls are identical in construction and can complement each other's functions in the event of a fault. This is a novel approach. The scientists are thus increasing functional reliability through a kind of miniaturized redundancy, which must be tested in orbit.

SOMP2b is also an educational training project funded by the German Aerospace Center e.V. (DLR). Many students were involved in the development of the satellite and the scientific experiments. "They faced great challenges in the process. The systems have to work in very rough space and survive the launch. You can't fly behind the satellite and re-adjust it. This is the only way we can train students in a practical way." enthuses Prof. Martin Tajmar, Director of the Institute of Aerospace Engineering.

The associated research projects were funded by the German Aerospace Center e.V. (DLR), the European Space Agency (ESA), the EU and industry.

FIPEXnano was developed through various collaborations with industry, on behalf of the Mullard Space Science Laboratory, UCL/MSSL, and through educational projects at TU Dresden. FIPEXnano is partially funded by "The European Union's Seventh Framework Programme for Research and Technological Development under grant agreement no [284427]. This publication reflects the views only of the authors, and the European Union cannot be held responsible for any use which may be made of the information contained therein."