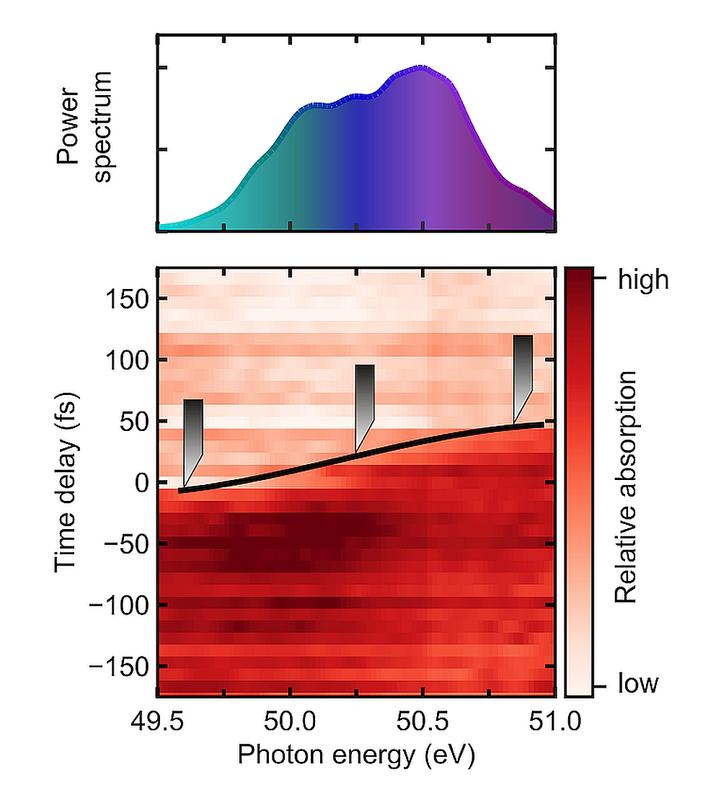 Fig. 2: Relative absorption of the probe pulse as a function of the photon energy and the time delay of the pump pulse. | Copyright: Graphics: MPIK 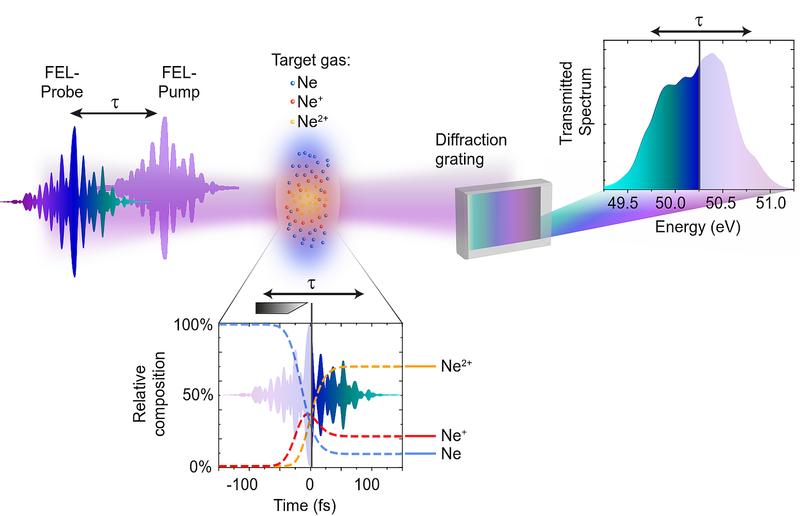 Ultra-short intense light or laser pulses are an important tool in modern atomic and molecular physics. They allow not only a detailed investigation of the structure of atomic and molecular systems, but also the specific manipulation of the reactions triggered by the interaction with the light field. Novel radiation sources such as free-electron lasers provide light flashes in the far ultraviolet (XUV) to X-ray range and open up new possibilities for this field of research in a revolutionary way.

Physicists of Christian Ott's group in Thomas Pfeifer's department at the Max Planck Institute for Nuclear Physics (MPIK) in Heidelberg have developed a new method for the direct characterisation of XUV pulses in collaboration with an international research team. Here, the focus is on the "chirp" of a laser pulse, during which the frequency of the light oscillation changes temporally. This is of central importance because an atom or molecule reacts very specifically to the light frequency due to its quantum structure and can also dynamically change its structure under the influence of the laser pulse. With a controlled chirp, the frequency could be adapted to this, thereby addressing specific transitions. The experiment for a direct measurement of the chirp of such laser pulses was performed at the free-electron laser FLASH in Hamburg (DESY). The XUV laser pulses used have a duration of about 100 femtoseconds (fs). A femtosecond is the millionth part of a billionth of a second.

For the simultaneous measurement of the temporal (waveform) and spectral (frequency) signature of the laser pulse, a pump-probe setup with two temporally shifted laser pulses was used (Fig. 1): Both pulses are focused onto a dense neon gas and analysed subsequently in a spectrometer dispersing their frequency or photon energy. The first pulse ("pump") efficiently ionises the target, so that up to 70% doubly charged Ne²⁺ ions rapidly accumulate over time. These are nearly transparent to XUV radiation, while neutral and singly charged neon still absorbs quite strongly. “This plasma target acts like an ultrafast switch for the transmission properties,” explains Thomas Ding, lead author of the publication: “From the second pulse (“probe”), only those parts of the waveform are transmitted - depending on the temporal offset - that see the ionised transparent medium; thus, the waveform is cut off with a temporal knife.”

Fig. 2 shows the experimental result for the relative absorption as a function of the photon energy and the time delay of the two pulses. The frequency spectrum of the relatively broadband pulses is depicted above. In the case shown here, the higher energies or frequencies of the probe pulse arrive ahead in time and are therefore only transmitted at a greater positive delay (i.e., the pump pulse arrives first) than the lower-frequency components that follow later. This is indicated in the figure by the knife symbols. The temporal absorption edge is therefore tilted and slightly curved. From this behaviour, the temporal frequency response in the pulses (chirp) can be directly determined. This is also in good agreement with simulations.

Such a chirp can be heard in the video example with ten consecutive pulses. The timescale was slowed down by a factor of two trillion to transpose the frequencies into an audible range - it sounds like the chirping of a bird or that of a cricket. In each individual pulse, the pitch drops slightly, even though all pulses have different temporal waveforms.

Group leader Christian Ott on the potential of the new measurement method: “It allows direct access to the temporal and spectral signature of the FEL pulses. This is already established for visible light (optical lasers). The realisation in the short-wavelength XUV to X-ray range allows for a much more precise control of individual atoms in larger molecules. This is also a key building block for nonlinear multidimensional spectroscopy in the X-ray range with ultrashort broadband attosecond (X)FEL pulses.”

Anhang der PM
Video example with ten consecutive chirped pulses. The timescale was slowed down by a factor of two trillion to transpose the frequencies into an audible range.