The fruit fly and its comb-shaped neurons 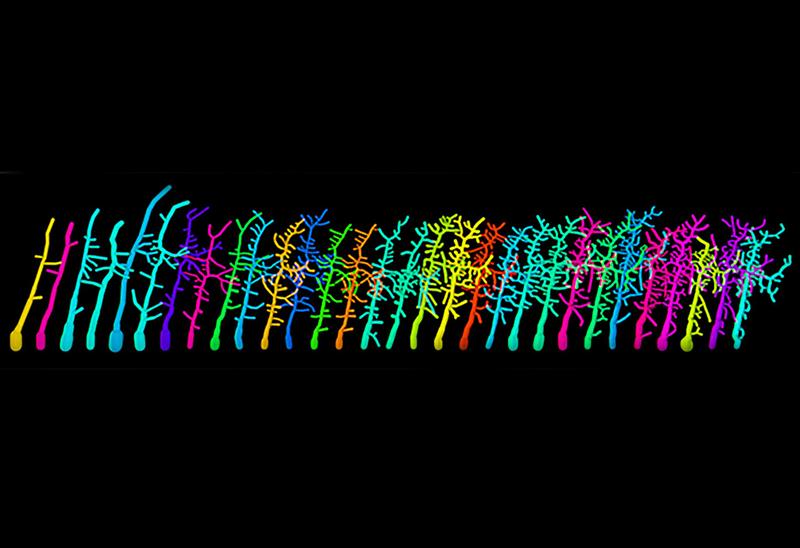 The fruit fly is one of the best-studied organisms in the world. Yet it still leaves questions unanswered. For example, how some of its neurons develop special, comb-like shape dendrites. ESI-scientists just conducted a study to answer it. And discovered something astonishing about randomness.

The fruit fly's body is tiny. The question it is supposed to answer is big: How do its dendrites, the part of a neuron that receives stimuli, optimize their structure? That is what André Ferreira Castro, neuroscientist in the lab of Hermann Cuntz at the Ernst Strüngmann Institute (ESI) and his colleagues at the German Centre for Neurodegenerative Diseases (DZNE) in Bonn intended to find out: "We wanted to know: which rules do dendrites follow when they are growing? Do they follow an inherent blueprint and what they will look like is therefore completely predictable? Is their growth determined by external factors? Or is there a completely different plan?", says André Ferreira Castro. Their findings have just been published in the scientific journal eLife.
The researchers focused on a type of neuron of the fruit fly larva, also known as c1vpda. The dendrites of these neurons have a very distinct shape: If you look at them under the microscope, they resemble little combs. This allows them to perceive the contraction of the larva body wall particularly well, an important information that the animal uses to coordinate its crawling movement.

The fruit fly in time lapse

Which process leads to this comb-like shape during development? A question that has not been adequately clarified yet. To change that, the ESI-scientists took a closer look at the fruit fly at different stages of development in an extensive collaboration with the lab of Gaia Tavosanis at the DZNE. They prepared embryos and larvae of the fruit fly in which c1vpda is labelled with a fluorescent marker to better observe and quantify the development of its dendrites in time-lapse movies. They were able to show a sequence of differentiation stages: before the dendrites reach their final shape, they go through multiple stages in which they (1) form branches and (2) partially retract them before they (3) stabilize and (4) expand those branches while the animal grows.
"Having established a putative functional role of the retraction phase, the next question was: on what principles does it operate? How does it improve the branching structure to maintain the best possible functionality of the dendrites?", says André Ferreira Castro. To find out by which rules dendrites grow and retract, he and his colleagues at the Cuntz Lab created a computer model based on the time-lapse data that simulates the differentiation process described above. They added three variables: number of branch points, total length, spanning area. "Every time we compared the computer-generated data to the real data, it matched. When we took out one of the variables, it did not."

It led the scientists to an astonishing finding: a stochastic process determines how these dendrites grow. In other words: random retraction. "That really surprised us the most! And it took us a while to believe it", admits André Ferreira Castro. No wonder, the researchers were rather expecting to find some kind of molecular neuro-inherent blueprint. André Ferreira Castro: "That was one of the most fascinating results for me: There are no strict rules, neuronal development is flexible and adaptive, while optimizing function at the same time.” Although the fruit fly is so tiny and so well studied, it still holds big surprises.