A Small Protein in Bacteria Overlooked Up to Now 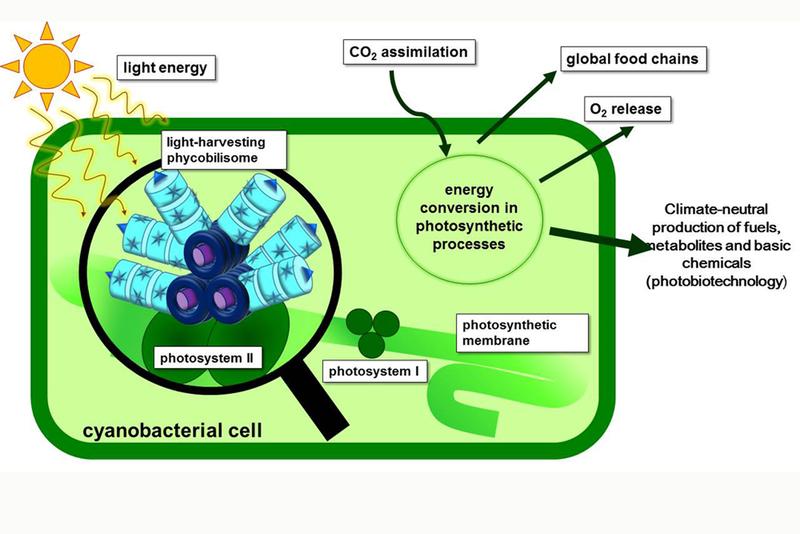 Photosynthesis is found at the beginning of nearly all food chains. Cyanobacteria use light as an energy source, too, and can carry out photosynthesis, similar to plants. | Quelle: Grafik: Wolfgang Hess | Download

The biological process of photosynthesis is found at the beginning of nearly all food chains. It produces oxygen to breathe and provides the energetic foundation for using biotechnological processes to synthesize biofuels and chemical feedstock. Therefore, researchers are particularly interested in rapidly growing cyanobacteria. These organisms use light as an energy source and can carry out photosynthesis, similar to plants. However, the required photosynthetic protein complexes bind many nutrients. Vanessa Krauspe and Prof. Dr. Wolfgang Hess from the working group for Genetics & Experimental Bioinformatics of the Faculty of Biology of the University of Freiburg and their collaborators have discovered the small, previously unknown protein NblD, which is involved in the recycling of these nutrients. The researchers are presenting their new findings in the specialist journal PNAS.

In addition to the pigment chlorophyll, cyanobacteria use for photosynthesis frequently also phycobilisomes, complexes consisting of proteins and another class of tetrapyrrole pigments, which are considered as the most effective light-harvesting structures found in nature. However, using phycobilisomes is costly for the cell as they bind a huge amount of nutrients in their macromolecular structures – nitrogen in particular. In order to recycle these nutrients under scarcity conditions, for example under conditions of insufficient nitrogen supplies, the cyanobacteria have sophisticated genetic programs which, among scientists, are actually considered to be well-examined.

In a new approach, aiming at taking a closer look at especially small genes and proteins, the team at the University of Freiburg has been able to characterize NblD. It is a previously unknown small protein with high-affinity, meaning it rapidly forms bonds. NblD binds specifically to what is known as the phycocyanin beta-subunit of the phycobilosome. Through this process cyanobacterial cells receive special mechanisms to handle potentially dangerous intermediate products that occur during the recycling of the phycobilisomes. Hess says, "The results illustrate the fact that especially small genes and proteins have been neglected hitherto and deserve a closer look."

The work has been supported by the German Research Foundation (DFG) within the priority program (SPP) 2002 "Small Proteins in Prokaryotes, an Unexplored World", the research training group (GRK) 2344 "MeInBio - BioInMe: Exploration of spatio-temporal dynamics of gene regulation using high-throughput and high-resolution methods", as well as the research group (FOR) 2816 "The Autotrophy-Heterotrophy Switch in Cyanobacteria: Coherent Decision-Making at Multiple Regulatory Layers (SCyCode)."