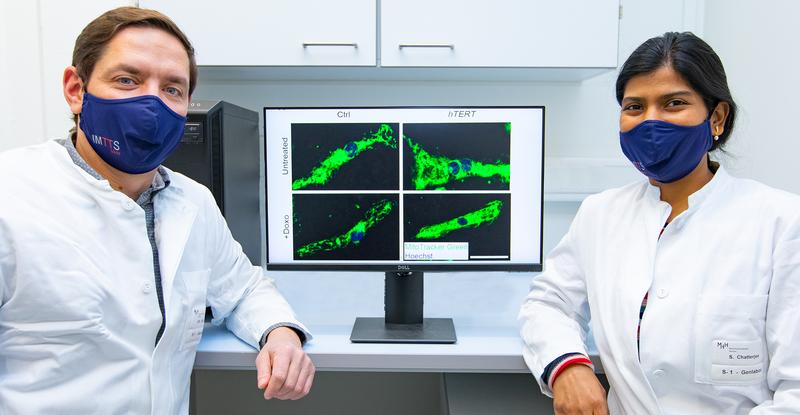 According to an estimate by the Robert Koch Institute, around 510,000 people in Germany were newly diagnosed with cancer last year. Thanks to improved therapies, cancer diseases can be treated more and more successfully - but what causes lasting damage to the tumours often also has severe side effects. The highly effective therapeutics from the group of anthracyclines, for example, prevent cancer cells from dividing. At the same time, however, they promote the formation of free oxygen radicals. These molecules, also known as reactive oxygen species (ROS), are toxic to the cells and damage the heart muscle, among other things.

This also applies to the active substance doxorubicin, which successfully fights cancer cells, but at the same time can cause the death of heart muscle cells (cardiomyocytes). Possible consequences are chronic heart failure or even heart failure. So far, there are hardly any therapeutic approaches against cardiotoxicity in chemotherapy. A research group of the Institute for Molecular and Translational Therapy Strategies of the Hannover Medical School (MHH) has now found an approach to save heart function. The study, led by Institute Director Professor Dr. Dr. Thomas Thum and Dr. Christian Bär, has been funded by the German Research Foundation and published in the journal Molecular Therapy. The first author is Dr Shambhabi Chatterjee.

The research group has focused on telomerase. The enzyme protects the ends of the chromosomes, the telomeres, from damage and shortening during cell division. In this way, the cell retains its ability to divide and does not age. This is why telomerase is also known as the "immortality enzyme" and is the subject of anti-ageing research. "In adults, this enzyme is normally switched off," explains Dr Bär. Only in certain cell types, such as blood stem cells, is telomerase still active. In previous studies on mice, the molecular biologist had already found that switching telomerase back on helps against age-related diseases and protects the heart. Since the heart muscle cells in adult mammals do not divide, the research team suspected that telomerase relieves the cells of toxic oxygen radicals by performing an "extra-telomeric task" beyond its function. They used doxorubicin to first increase ROS levels and cause cardiotoxic effects. In the mouse model, the administration of telomerase via a gene shuttle led to the detoxification of cardiac muscle cells, better protection against cell death and thus improved cardiac function. This protective effect could be confirmed in experiments with human heart muscle cells, which had been produced from induced pluripotent stem cells.

Telomerase also protects the "power plants" of the cells

"Gene therapy with telomerase apparently prevents the cell death of the heart muscle cells," says Dr Bär. At the same time, it also protects the mitochondria from the harmful side effects caused by the chemotherapeutic drug. Mitochondria, as the "power plants of the cell", provide the necessary energy for all metabolic processes and also react sensitively to doxorubicin-promoted ROS formation. "When the cell is under stress, telomerase migrates from the cell nucleus to the mitochondria and protects them from damage," the researcher explains. In the heart muscle cells, detoxification of the cell power plants ensures that the heart's pumping function improves. Telomerase gene therapy could be a new strategy to prevent heart damage caused by chemotherapeutic drugs.