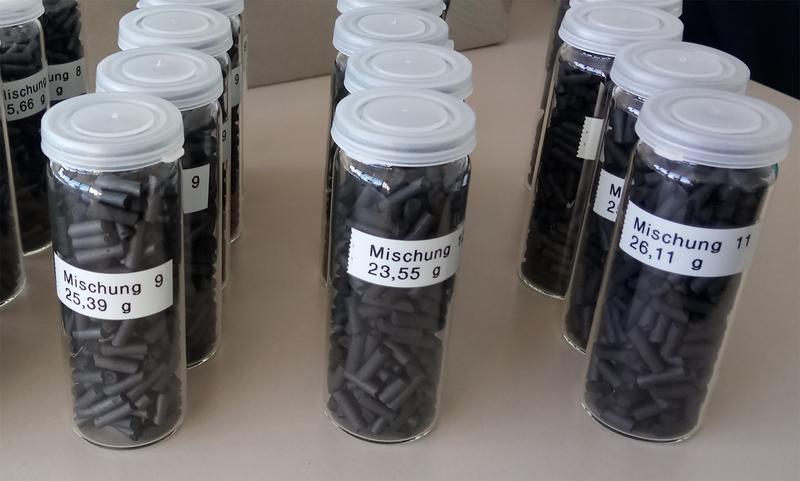 Wastewater plants employ a variety of effective and established processes to treat sewage and wastewater. As yet, however, there is no ideal, uniformly recognized method for removing trace substances. Researchers from the Fraun-hofer Institute for Environmental, Safety and Energy Technology UMSICHT are seeking to change this. In a project known as ZeroTrace, they are pursuing an integrated approach that combines their very own activated carbon composite with a newly developed electrical regeneration process. The result is a method that promises efficiency, sustainability and large-scale viability.

When people in Germany turn on the faucet, they can usually be confident that the water flowing out is more than fit to drink. This is essentially down to the large number of treatment plants, which employ a variety of highly effective mechanical, biological and chemical methods to rid our wastewater of impurities. Yet trace substances such as pharmaceutical residues, household chemicals and the contrast agents used in X-ray imaging are more difficult to remove. Unfortunately, these can pose a serious danger to both humans and animals, even in very low concentrations.

In order to deal with this problem, more and more plants are now being retrofitted with an additional level of treatment, designed to remove such trace substances. This includes the use of chemical-oxidative processes, which can create problematic byproducts. By and large, however, the method of choice is activated carbon. Activated carbon has an extremely porous structure, which gives its a huge surface area, inside and out. Four grams of activated carbon has a surface area the size of a soccer field. It is able to adsorb other substances – according to their charged state – like a sponge soaking up a liquid.

Generally speaking, activated carbon offers an effective way of removing trace substances from wastewater. In practice, however, there is often a key drawback. Ilka Gehrke is head of the environment and resource usage department at the Fraunhofer Institute for Environmental, Safety and Energy Technology UMSICHT in Oberhausen. She explains: »At present, most processes use activated carbon in powder form. Once this has adsorbed as much material as it can, it is disposed of by combustion. Now that’s obviously a big problem in sustainability terms, especially since activated carbon is often made from a nonrenewable raw material – namely, standard black coal.«

Researchers from Fraunhofer UMSICHT have therefore teamed up with a number of industrial partners on a joint project funded by the German Federal Ministry of Education and Research. ZeroTrace aims to optimize the use of activated carbon for the removal of trace substances from wastewater. The research team is pursuing an integrated approach that also includes an investigation into innovation management and resource conservation. From the very beginning, researchers have therefore been able to take into account the various factors driving or inhibiting innovation in this field.

Gehrke and her team are investigating the use of granular activated carbon made of renewable materials such as wood or coconut husks. Unlike activated carbon in powder form, these granules can be reactivated by treatment at a very high temperature. This removes the adsorbed substances, thereby reactivating the spent carbon for reuse. At present, however, this spent carbon often has to be transported over long distances for reactivation. Moreover, when the pieces of carbon are mixed together in a fluidized bed, there is high abrasion, leading to a substantial depletion of material.

A suitable regeneration method led to the right starting product

The researchers therefore focused on developing a regeneration process that could be carried out directly at wastewater treatment plants. »The process uses a physical effect of electrical fields«, Gehrke explains. »It’s an idea that others have already pursued in relation to gas purification. For our project, we were able to transfer a lot of the principles to a liquid-based scenario. Back then, electrical processes were highly expensive, so the research ended up being shelved. But now we’re going to be able to make increasing use of the surplus power produced from renewable sources. In the future, we can expect to see cheap power becoming available at times of peak generation.«

The idea behind the new process is based on a phenomenon known as electric field swing adsorption (EFSA): the spent carbon is heated electrically to the point where the adsorbed pollutants are either desorbed or combusted. For this to work, both the activated carbon and the reactor must meet certain specifications. The activated carbon has to have a sufficiently high electrical conductivity, so that it conducts the required amount of power. At the same time, however, it must also have a sufficiently high electrical resistance, so that it heats up to the required temperature as the current flows through it. For this purpose, Gehrke and her team developed their very own activated carbon composite. The base material is powdered charcoal, which is mixed with graphite. This endows it with an electrical conductivity three times that of normal activated carbon, without any diminution in its adsorption properties. As for the reactor, the chief difficulty was to construct it in such a way that it could withstand temperatures of up to 650 degrees Celsius. Gehrke’s team have opted for a process of continuous regeneration: »The idea is to continuously remove small quantities of spent carbon from the settling tank by means of a conveyor, to regenerate this and then feed it back into the tank. This only requires a relatively small reactor, because it never has to process more than a fraction of the total spent carbon at any one time, and the regeneration itself only lasts a few minutes. And, as the spent carbon does not move around within the reactor, there is minimal abrasion, so we estimate that we will only have to replenish it with a maximum of 10 percent new activated carbon per cycle.«

Use of this activated carbon composite has undergone trials at the wastewater treatment plant of industrial partner Wuppertal-Buchenhofen, where it was shown that it successfully adsorbs trace substances. To test the regeneration process, the researchers set up a prototype reactor at a location removed from the treatment plant. This reactor, which has capacity of 40 to 50 liters, also delivered encouraging results. At the end of an almost 3-year project phase, Gehrke is therefore confident: »Our tests have shown not only that our process conserves resources but also that is economical and competitive.« At present, the partners are discussing possible follow-up projects involving scaled-up pilots located on site at the wastewater treatment plant.