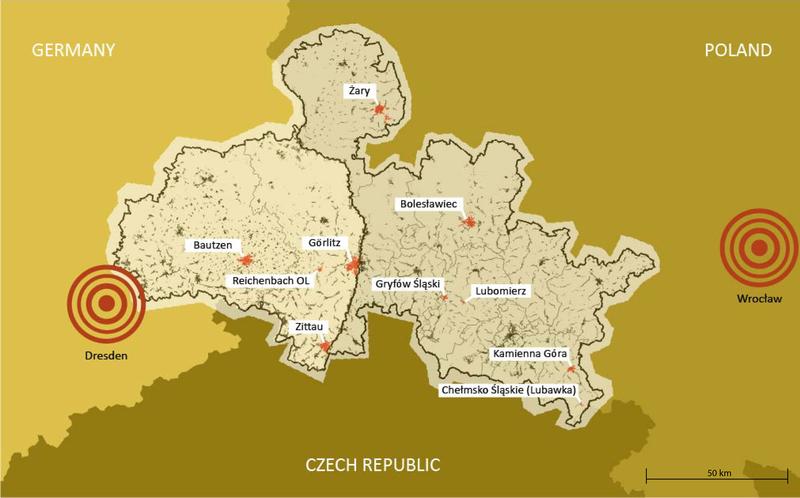 Location of the project REVIVAL! partner towns in the INTERREG Poland-Saxony funding area 2014-2020. | Copyright: (Source: REVIVAL! based on OpenStreetMap) | Download

Many great potentials are lying dormant in historical towns and small cities along the Saxon-Polish border. Their cultural heritage could be exploited to raise the attractiveness of these locations and their quality of life of. How to achieve this was the objective of the EU project “REVIVAL! – The revitalization of historical towns in Lower Silesia and Saxony”, led by the Leibniz Institute of Ecological Urban and Regional Development (IOER). Strategy recommendations are now on hand for the region as well as the four Saxon and six Polish towns involved in the project.

In Saxony, the German-Polish project team took a close look at the towns of Bautzen, Görlitz, Reichenbach/O.L. and Zittau. The central question was: How can the architectural heritage of the municipalities with their historical centres contribute to the quality of life of local residents as well as to the sustainable development of the cross-border region? The strategy recommendations formulated by the project team are intended to help the towns activate this potential.

The project results leave no doubt that the historical urban landscapes in Saxony and Lower Silesia offer huge potential for opportunities that have been overlooked or little used up to now. According to project leader Prof. Dr Robert Knippschild of the Leibniz Institute of Ecological Urban and Regional Development (IOER): “The many activities that participating towns and cities developed in the course of the project from October 2018 to December 2020 – and this despite Covid-19 restrictions – give an idea of the rich fund from which they could actually draw.” For example, each of the participating towns implemented a pilot measure to make historical buildings as well as cultural heritage such as craft traditions visible and tangible for local residents and visitors.

Five theses on the importance of cultural heritage

But how can this potential be strategically exploited over the long term? What can cultural heritage really contribute to the quality of urban life? These are the questions that the project’s three scientific partners investigated together with the partner towns. Their findings have been summarized by the IOER, the International Institute (IHI) Zittau of Technische Universität Dresden and the Polish Instytut Rozwoju Terytorialnego (IRT) in strategy recommendations for the region and each of the participating towns. Based on literature research and expert interviews, the scientific partners initially formulated five theses which describe the potential contribution of the architectural heritage to the quality of urban life. The scientists assumed, for example, that the historical buildings as well as craft traditions safeguard the identity of these settlements and strengthen the residents’ sense of belonging. The theses also claim that the architectural heritage has a positive impact on social cohesion, cultural and educational opportunities, the urban structure and public spaces as well as the local economy. Together with local actors, the scientists investigated to what extent these assumptions could be empirically confirmed in the participating towns. To this end, they made a tour of each settlement and held intensive discussions with focus groups. In this way, the theses were enriched with local information. Moreover, the individual requirements of each town could be pinpointed, conclusions drawn on their strengths and weaknesses as well as potentials and challenges, before, finally, strategy recommendations were formulated for further action. The project team also derived such recommendations for the region as a whole.

As Robert Knippschild explains: “During the project, it became very clear that the towns are in part facing some very similar problems. Therefore, they can learn from one another and should join forces to find solutions. On the other hand, the highly specific framework conditions at the local level always determine how cultural heritage can be activated and thus contribute to a better quality of urban life.” In addition to the condition of the historical centres and the financial resources of the municipalities, the success of this approach also depends on the varying degrees of interest and commitment of local residents as well as their social cohesion.

Topics that concern all four German partner towns are, for example, the balancing act between preserving historical buildings and the need to modernize in order to ensure their continued use, or the question of how to get young people excited about their local cultural heritage and how the architecture of the past can also be used to stop demographic change and migration from the towns. Robert Knippschild: “In general, we can say that each municipality has to find its own effective pathway. Our strategy recommendations are intended to give them many important pointers. At the same time, the recommendations also apply to regional and state planning on both sides of the Saxon-Polish border.” Clearly, the project did not operate in a vacuum: The various project documents, the strategy recommendations as well as a summarizing final brochure contain references to previous strategy papers and planning documents. This means that the region and the participating towns already have a foundation to build on.

In project “REVIVAL! – The revitalization of historical towns in Lower Silesia and Saxony”, which ran from October 2018 to December 2020, three scientific institutions and ten towns in south-western Poland and eastern Saxony addressed the question of how settlements in rural areas can make better use of their cultural heritage and thus increase the attractiveness of their centres.

The scientific partners were the Leibniz Institute of Ecological Urban and Regional Development (IOER, project management), the International Institute (IHI) Zittau of the Technische Universität Dresden and the Instytut Rozwoju Terytorialnego (IRT, Institute for Territorial Development) of the Lower Silesian voivodeship in Poland. Four German and six Polish towns/cities took part in the project as practice partners. On the German side, these were Bautzen, Görlitz, Reichenbach and Zittau; on the Polish side, the practice partners were Bolesławiec, Gryfów Śląski, Kamienna Góra, Lubawka, Lubomierz and Żary.
A scientific study was conducted within the project, which resulted in the drafting of strategy recommendations for the participating towns/cities and the region as a whole. In addition, the settlements also implemented pilot measures to revitalize their centres and organized a series of joint events. Information on the project is provided by a touring exhibition and an interactive web application.

REVIVAL! was funded within the framework of the INTERREG Poland-Saxony 2014-2020 cooperation programme. Specifically, it received 877,544 euros from the European Regional Development Fund (ERDF), a sum corresponding to 85% of the total budget of 1,032,906 euros. The remainder was raised by the project partners.