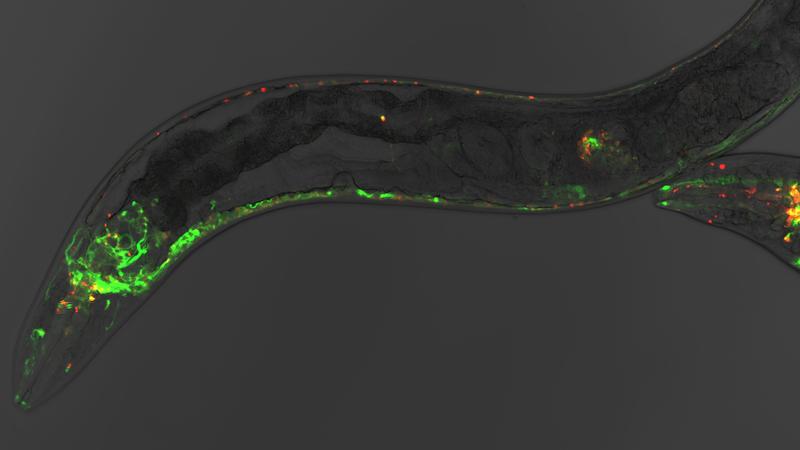 Immense research success in cell biology: Professor Janine Kirstein’s working group at the University of Bremen has taken an important step towards better understanding Alzheimer’s. The decisive nerve cells, in which the disease takes hold, were found in threadworms.

Dementia illnesses are a great strain, especially for older people. According to information from the pharmaceutical manufacturer Novartis, around one million people in Germany are affected; Alzheimer’s makes up around 70 percent. As people are becoming older, the growth rate is increasing exponentially. Research findings carry hope – and one significant finding comes from the University of Bremen. The cell biologist Professor Janine Kirstein and her working group have determined the “nerve cell 0” in threadworms – thus the nerve cell in which Alzheimer’s disease begins. As the findings can be transferred to humans, more expedient approaches for the avoidance or slowing down of the disease can now be developed.

“In the human ageing process, increasing numbers of defects occur in our nerve cells,” explains the Bremen university lecturer. “With Alzheimer’s, there is an increasing number of misfolded proteins, which them clump together and create elongated, rope-like structures, for example.” These “rope-like structures” can attack large areas of the brain and finally lead to diseases such as Alzheimer’s or Parkinson’s – and in the worst case to dementia with all the connected cognitive impairments.

In the frame of the research into threadworms, Janine Kirstein and her working group succeeded in making this process visible and above all, in identifying the “starting point” of the illness – the “nerve cell 0.” “Threadworms are particularly suitable as they are identical to humans on the molecular level. They are also transparent, which is how the processes can be made visible using fluorescent coloring.” During the research, the group discovered the cells in which the clumping first occurs.

One of the advantages is that the threadworm’s life cycle only spans one month from birth to death. “Carrying such research out on humans is prohibited on ethical grounds and the cycle would still take two years even if mice were to be used,” according to Janine Kirstein. In contrast, the processes are quick and can be observed on a daily basis in threadworms.

The results of the research carried out by the Bremen working group now allow for the expedient focusing on the nerve cells in humans, in which degenerative neurological diseases such as Alzheimer’s start. “For example, one could develop a marker that allows for the inference of whether the degeneration has already started or not,” states the professor. “The quicker one could then react in order to avoid further consequences.”

The working group published their findings in Progress in Neurobiology, the leading neurobiological journal. Subsequently, Janine Kirstein and her colleagues received short-notice start-up financing of 50,000 euros from the Alzheimer Forschung Initiative e.V. The funds are to be used for the development of further projects.

Alzheimer’s disease stems from the fibrillization of amyloid-beta peptides and tau proteins. Amyloid-beta peptides occur in all humans but only a relatively small proportion suffer from Alzheimer’s. The largest risk factor is age. In over-80-year-olds, the proportion of those suffering from Alzheimer’s is 20%. This number rises to 30% to 50% for those over 85 years of age. The individual molecules are harmless. It is only when they combine that they can create toxic aggregates.

In the past years, it has been shown that the deposits of the amyloid-beta peptide can disperse throughout the whole brain. If this cascade gets going, it is not possible to stop or even reverse it. To date it was only known that the first fibrillar amyloid-beta peptide deposits occur in the brain’s cerebral cortex and hippocampus. However, it was unknown where the aggregation begins exactly.

Janine Kirstein’s working group have now successfully generated a new animal model of Alzheimer’s disease in the Caenorhabditis elegans threadworm. Using this model, her colleagues have been able to show that the amyloid-beta peptide aggregation begins in exactly six nerve cells – the IL2 neurons – and then systematically spreads to all nerve cells from there.

Is it now possible to suppress the transfer to the other nerve cells? The nematode is easy to access on a genetic level and allows for cell-specific manipulation. Kirstein’s group has shown that an expedient inhibition of the amyloid-beta aggregation in the IL2 neurons actually slows down the aggregation cascade and the transfer to other neurons. Additionally, a reduction of the toxicity and an increase in the median lifespan were observed.

Can these findings be applied to far more complex model systems, such as mice? That remains to be seen. The identified IL2 neurons use the same neurotransmitters (acetylcholine) as the majority of the neurons in the areas of the brain that are the first to be affected by the amyloid-beta aggregation. It is not possible to directly match the homogenous neurons. However, the Caenorhabditis elegans data helps a great deal, as it is now possible to specifically search for the “start” neurons in more complex systems in order to intervene at an early stage and subsequently hinder the aggregation cascade. Thus, these findings are both highly relevant for diagnostics and for the development of new therapy approaches.