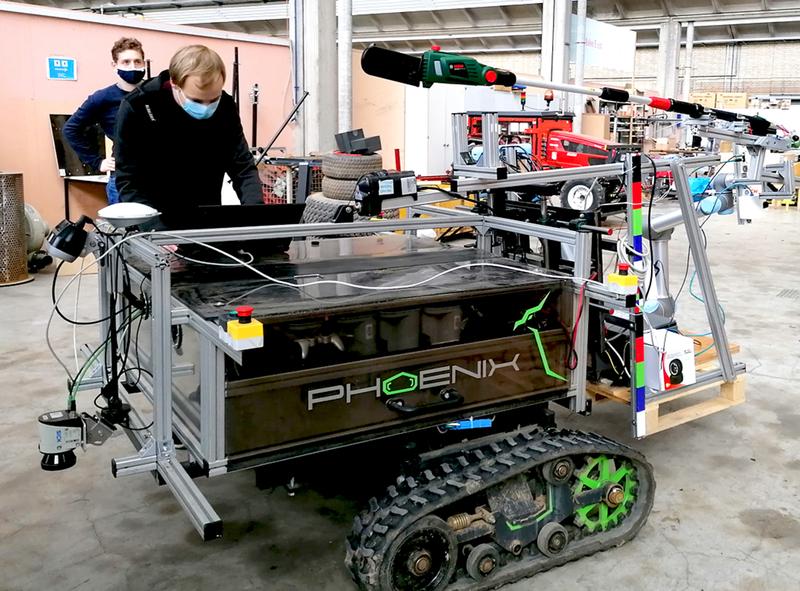 The articulated arm is also used to move the pruner, a small chainsaw mounted on a telescopic pole, into the correct cutting position. | Quelle: Emilie Jung | Copyright: University of Hohenheim | Download

Orchard meadows are among the most species-rich biotopes in Central Europe. But many orchards are in acute danger: Since their cultivation is hardly worthwhile from an economic point of view, the vast majority of orchard meadows are not maintained at all or only poorly. As a result, the trees become diseased or die. Regular and professional pruning is required for long-lived, healthy trees that also produce a respectable yield. A project at the University of Hohenheim in Stuttgart aims to provide pruning support with the help of artificial intelligence. Dr. David Reiser from the Institute of Agricultural Engineering is working on the development of an autonomous robot that will be able to perform tree pruning largely on its own in the future. Video with English subtitles https://www.youtube.com/watch?v=3NOyP7eOhxo

Orchard meadows not only characterize the landscape in many regions of Germany, but are also valuable habitats with numerous functions. They serve to protect species, soil, and water, act as climate compensation, and are a gene reservoir for around 3,000 fruit varieties in Germany alone.

With over 5,000 animal and plant species, they are among the most species-rich biotopes in Central Europe. In addition to green woodpeckers, wrynecks and treecreepers, bats and dormice, wild bees and hornets, countless species of beetles and other insects as well as lichens and mosses also find a habitat here.

Orchard fruit, mainly in processed form, also has an economic significance: For the most important branch of production, apple juice production, the orchard stands in Germany supply between 500,000 and just over one million tons of apples, depending on the harvest year.

Despite this, orchard populations have been declining for decades. In addition to economic reasons, one cause is the lack of care for the orchards, which significantly shortens the life of fruit trees.

Healthy, stable and long-lasting crowns can only form with regular, professionally executed pruning. It contributes decisively to the life span and yield capacity of the trees and consequently also to the continued existence of the orchards. But it is precisely here that major problems often become apparent: About 80% of the trees are not pruned at all.

While today various agricultural machines, such as tree shakers and picking machines can serve the fruit grower well in harvesting and picking the fruit, pruning, which is so important for the preservation of the trees, still has to be done by hand.

A solution is to be offered by an autonomous robot that Dr. Reiser, an agricultural engineer from Hohenheim, is developing together with doctoral candidate Jonas Straub and research assistant Jonas Boysen in the Department of Technology in Crop Production.

"With the help of the robot, we want to help keep the trees healthy and alive for as long as possible," said Reiser, describing the goal of the development work, which was made possible in part by a grant of 113,000 euros from the Baden-Württemberg Foundation's elite program for postdocs.

On top of an existing mobile prototype, the three scientists mounted a robotic arm of the kind used in industrial production lines. This articulated arm robot can move freely in all directions, so that any point within its range can be reached.

The arm is also equipped with special sensors that help navigate and recognize the trees and their structures: "As the robot moves around the tree, we capture its three-dimensional structure using what is known as a LiDAR scanner. Similar to radar, a laser scans the environment and measures the distance to objects. A point cloud is then created in the computer from many individual distance measurements, which depicts the three-dimensional structure of the tree," stated Reiser.

... to be able to carry out tree pruning independently later on

The articulated arm is also used to move the pruner, a small chainsaw mounted on a telescopic pole, into the correct cutting position. "Currently, we are working on teaching the computer where the robot should use the saw," said Reiser. "At the same time, tree pruning is a science in itself; you could almost call it philosophy."

There are very different pruning methods depending on the tree species and the desired goal. For example, sometimes you want to leave a continuous main stem, and then you need to shorten the branches. In other cases, the main trunk must be shortened to get a light crown with many branches. The user should later be able to choose from different options.

Right now, the robot still has to be steered by hand to the individual trees and places on the branches where it should prune. The long-term goal, however, is to have the robot work fully autonomously on a meadow orchard and cut back branches up to a height of seven meters.

"A particular challenge lies in the high variability of orchard meadows," explained Reiser. "A lot of innovative development work is still needed to be able to use autonomously operating robots there."

A recent science video from the University of Hohenheim explains and demonstrates how the intelligent robot works. You can see it now on YouTube with English subtitles: https://www.youtube.com/watch?v=3NOyP7eOhxo

In 2020 and 2021, the Science Year will be dominated by the bioeconomy - and thus by a sustainable, biobased economy. The aim is to produce and use natural materials and resources in a sustainable and innovative way, replacing fossil and mineral raw materials, manufacturing products in a more environmentally friendly way, and conserving biological resources. This is more necessary than ever in times of climate change, a growing world population, and a drastic decline in species. The Bioeconomy Science Year, organized by the Federal Ministry of Education and Research (BMBF), shines a spotlight on the topic.