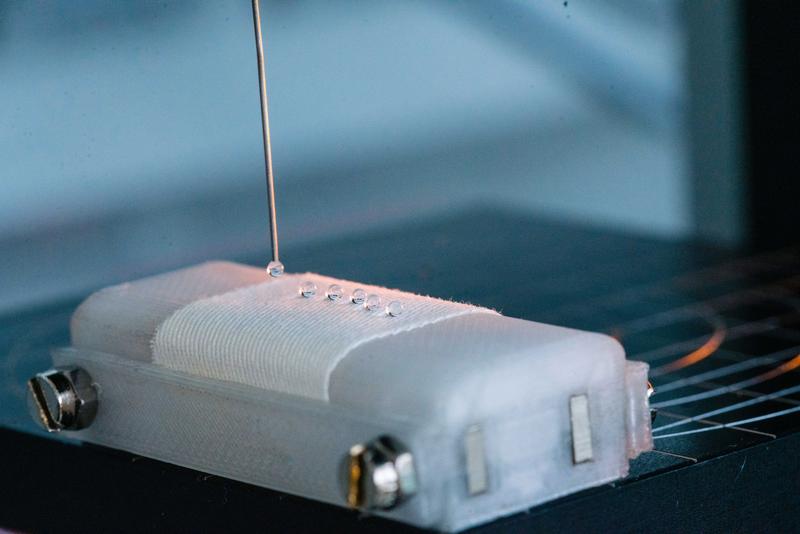 Textiles can be coated with the biopolymer chitosan and thus made water-repellent by binding hydrophobic molecules. The good thing is that this can also replace toxic and petroleum-based substances that are currently used for textile finishing. In the last few years Fraunhofer IGB and partners in the HydroFichi project have researched how this can be done: A technology has been developed to provide fibers with the desired properties using biotechnological processes and chitosan.

The manufacture of textiles is, even nowadays, still largely characterized by the use of chemicals: biotechnological processes, enzymes and renewable raw materials have so far played a subordinate role. For example, at present chiefly perfluorinated chemicals are used when finishing textiles to obtain water- and oil-repellent properties. These are harmful to health and also only degradable to a small degree, which is why they remain in the environment for so long.
The Fraunhofer Institute for Interfacial Engineering and Biotechnology IGB has been researching sustainable biobased alternatives for some time. In the HydroFichi project – short for Hydrophobic Finishing with Chitosan – which was completed at the end of January 2021, researchers at the institute developed a way of producing chitosan from waste streams and using the biopolymer not only as a sizing agent in the processing of yarns, but also for the functionalization of textiles in the finishing process.

Chitosan from waste for environmental protection, medical purposes or textiles

Chitosan is a renewable raw material that is derived from chitin; after cellulose, it is the second most common naturally occurring biopolymer. Sources of the nitrogen-containing polysaccharide can be crab shells from fishing waste, insect skins and shells that result from the production of animal feed, or – as a vegan variant – the cell walls of mushrooms. The structure of the two molecules is very similar; the only difference is an acetyl group, which is removed when it is converted to chitosan. Chitin is insoluble in water and most organic solvents. Chitosan is also not readily soluble; however, the addition of mild acids makes the biopolymer water-soluble and it can therefore be used as a textile auxiliary.
In order to isolate chitosan from a particular waste stream, chitin must first be obtained from the starting materials by means of demineralization and deproteinization and then its derivative chitosan. The properties of chitosan can be individually adapted by choosing the appropriate conditions. The biomolecule produced in this way can be used directly in a wide variety of practical applications – for example as a flocculant in wastewater treatment or as a drug carrier in medicines.
There are also numerous conceivable uses for chitosan in the textile industry. In sizing, for example, the efficiency of the natural substance has proved convincing in pilot scale tests carried out by the German Institutes of Textile and Fiber Research Denkendorf. Here, the effectiveness was shown in the significantly lower roughness of the yarns after weaving textile fabrics. The values achieved with chitosan from insects were comparable to those from commercial crab shells. In the future, this fact will enable completely new possibilities of extraction in line with the bioeconomy.

“Our aim in the HydroFichi project was to provide the textile industry with a raw material for a wide variety of applications that can be obtained from renewable educts, at the same time avoiding chemicals that damage the environment and health,” explains project manager Dr. Achim Weber, deputy head of the innovation field Functional Surfaces and Materials at Fraunhofer IGB. “In addition to simple coating with chitosan, which protects the fibers, we were also able to use the substance as an anchor molecule to create cross-linking points for a wide variety of functional groups and thus to provide textiles with specific properties such as making them water-repellent. Chitosan can therefore function as a matrix material or template at the same time, and this can be done with a wide variety of fiber materials.”
The finishes were evaluated using standardized tests, but also with specially designed test stands and methods. For example, measurements on treated textiles showed contact angles of over 140°. This means that the fabrics are very water-repellent and confirms that the processing of the textiles has been successful. In a next step, the technology developed at the IGB is to be transferred from the laboratory scale to the much larger pilot scale in order to make the sustainable biomolecule ready for market use as quickly as possible, for example in the sports and outdoor sector.

For the first time biotechnological processes in textile finishing

In the project, the IGB scientists and four partners from the textile industry – the German Institutes of Textile and Fiber Research Denkendorf (DITF), J.G. Knopf's Sohn GmbH, Helmbrechts, and Textilchemie Dr. Petry, Reutlingen – were able for the first time to establish biotechnological processes in raw material extraction and finishing that have proven to be compatible with all textile processes. So far, this is a unique selling point in the finishing of textiles. “We have all recognized the great potential of chitosan for efficient hydrophobization and as a functional carrier. And, thanks to the good cooperation, we were able to successfully establish techniques for tailor-made functionalization of textiles,” adds Dr. Thomas Hahn, who conducts research in the innovation field of Industrial Biotechnology at the IGB. “In addition, other fields of application for the biopolymer are very promising. That is why we initiated the follow-up project ExpandChi immediately after HydroFichi, in which together with our partners techniques are to be developed to use biobased chitosan as a functional carrier to replace other synthetic polymers, for example for a special anti-wrinkle or flame-retardant coating. The textile industry is very interested in utilizing such a sustainable biomolecule as quickly as possible. “
The “HydroFichi” project was funded by the German Federal Ministry of Education and Research (BMBF) under promotional reference 031B0341A; the follow-up project “ExpandChi”, which began in February 2021, is funded under promotional reference 031B1047A.