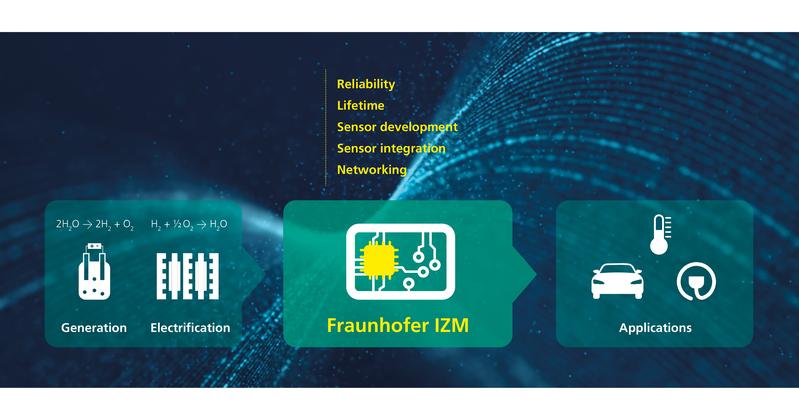 Hydrogen could revolutionize how the world generates, stores, and uses energy. Much has been written about its potential for the transport sector in particular, as it could help make busses, trains and ships climate neutral. Its advantages: Electric vehicles powered by hydrogen fuel cells are silent, emit nothing but water, offer exceptional mileage, and are quick to recharge. But if that were the whole story, cars would have long stopped running on diesel or petrol. Fraunhofer IZM expert Dr. Stefan Wagner has spent decades on researching fuel cell technology and knows why hydrogen is a miracle gas and how it can help make electric systems safer and more economical.

Mobile phones, cameras, portable power generators for military use, fuel cells for cars, or outdoor weather stations – fuel cells have been proposed and tested for a vast range of devices. Few of them have survived the test of the market, as energy systems powered by hydrogen are still too expensive for most consumers and not yet reliable enough for mass market vehicles, power electronics, or other devices. But the technology has many high-profile proponents, not least among politicians calling for the energy sources of the future to be not just cheap and durable, but above all, good to the environment. Dr. Stefan Wagner at the Fraunhofer Institute for Reliability and Microintegration IZM in Berlin started working on fuel cells for his thesis and knows the answers to the most pressing questions.

Fuel cells and batteries – Rivals or team players?
S. Wagner: “A combination of both is definitely the way to go. You cannot have a pure hydrogen engine without a battery somewhere in the system. Every fuel cell needs a battery to give it the activation current it needs. Right now, the issue is that hydrogen drives weigh several hundred kilograms, part of which is due to their bat-teries. We can definitely shrink them, because we need to get the weight down to make mobile applications, like fuel cells for cars, safer and more reliable to operate. As specialists for miniaturized and highly reliable systems, we can help the makers of sensors and actuators here at Fraunhofer IZM to shrink their components and make their systems more durable and effective at the same time, e.g. with intelligent sensor pressures, other monitoring systems, or innovative actuators.”

EU climate goals: Carbon neutral by 2050, courtesy of hydrogen?
The Fraunhofer IZM researcher sees no technical obstacle in the way. The question is whether carbon neutrality is the goal, or maximized profits for the manufacturers. Despite considerable support from politicians, real interest in the industry, and more than 150 years of research in the field, hydrogen technology is frequently pushed back in favor of more financially appealing alternatives, like regular batteries. Countering this cycle of progress and stagnation needs real action on the technological underpinnings of hydrogen-powered energy generation. Dr. Wagner says: “We’re delighted that the Fraunhofer Society has rediscovered hydrogen and letting us explore the prospects of the gas and its many applications. Right now, fuel cell systems suffer from being very costly, but not yet as safe, robust, and reliable as they could be. In current systems, active sensors and actuators are far too far from each other. Sensors located right on the stacks could help us make the systems more reliable and durable.”

Any cheaper zero-emission alternative to hydrogen?
Dr. Wagner explains that the exceedingly low temperatures at which liquid hydrogen is kept allows exceptional power density, but also requires a lot of effort to keep the system operating at such extremes. Pressurized storage can be a first step in the right direction for more sustainable progress with hydrogen applications, but it still lags behind conventional fossil fuel sources, like coal or natural gas, not just in its economics, but also in its flexibility: When more power is needed, conventional generators could just feed in more fossil fuel. Hydrogen suffers from the same inherent problem as solar or wind energy: All of them are harder to manage, because of their unpredictability, as wind power depends on the weather and local vegetation and photovoltaic power on the presence of sunlight. To avoid shortages, the systems need to be scaled up and accept the potential of overproduction. This is where electrolysis and hydrogen storage solutions can come in. Dr. Stefan Wagner’s preferred vision is a combination of all three: regular demand supplied by wind and solar, with fuel cells taking over when demand peaks to give each technology the opportunity to make most of its potential.

Prospects for research and practice
As the Fraunhofer Society’s institute dedicated specifically to reliability and microintegration, Fraunhofer IZM cares about developing components that are not just extremely advanced in terms of their miniature scale, but also safe, reliable, and affordable for their users, be it in traffic and transport or in power generation. That is why the team around Dr. Wagner is looking for project partners who are just as committed to revolutionizing the gas-to-power process. They are looking into robust and reliable sensors and actuators to facilitate the gas side of that process, supporting e.g. the development of new hydrogen, humidity, or pressure sensors, entire sensor grids, or crucial pressure regulators or the design and reliability tests of power and control electronics, where explosion protection is an obvious concern. They also offer their services and expertise for reliability and robustness analyses of controllers and fuel cell components under the specific conditions created by hydrogen applications and the mission profiles of each client. From integrated sensors and improved system designs to active tests of working systems, Fraunhofer IZM’s services cover the technology’s entire lifecycle.

Much remains to be done, but Dr. Wagner’s team stays energized by the very real prospect of hydrogen making zero-emission power generation possible. Dr. Stefan Wagner began researching the potential of fuel cell technology two decades ago, initially in the hope of making fuel cells a game changer for powering miniature devices. Over the years, he has begun to think in a much larger scale, as he now considers hydrogen the solution for capturing and storing the energy produced by wind farms for reliable access to green electricity.

About Dr. Stefan Wagner
Stefan Wagner received his Dipl.-Ing. degree in electrical engineering from the Technical University of Berlin, Germany, in 1998. He received the Ph.D. degree in electrical engineering from the Technical University of Berlin, Germany, in 2009.
Since 2000 he was working at the Fraunhofer-Institute for Reliability and Microintegration IZM in the department of high density interconnect and wafer level packaging. His research interests are integrated power supplies for Microsystems and Portable Systems. He is currently responsible for technology development, modeling and electrical characterization of miniaturized fuel cells. He has taken over the coordination of several research projects for the development of micro-fuel cells for micro systems and portable electronics. Dr. Wagner has authored and co-authored numerous papers in the fields of fuel cells and micro energy systems as well as four patents in the area of micro fuel cells.
Since 2013 he is working in the department of Environmental and Reliabilty Engineering and is concerned with corrosion phenomena and reliability assessment and analyses. Since 2015, he has been leading the group that deals with issues related to the reliability of electrical assemblies and systems as well as AVT technologies.