COVID-19 Deaths Worldwide: Taken Together, People Under 75 Account for Most of the Years of Life Lost 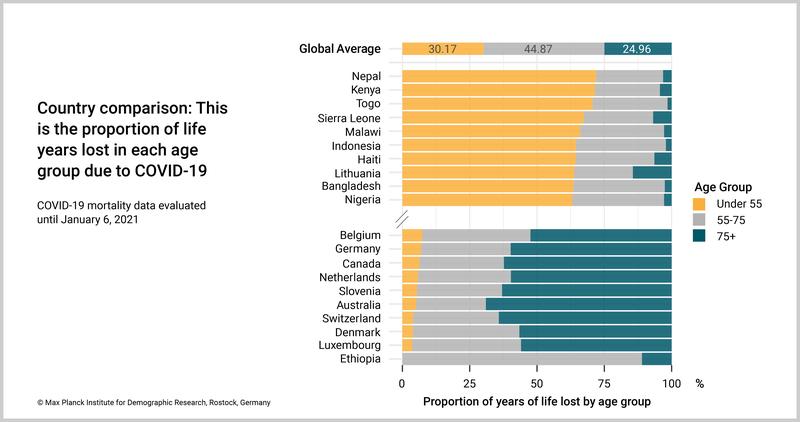 To properly assess the impact of the COVID-19 pandemic on mortality, it is not enough to only count the number of dead. That's why an international team of researchers evaluated more than 1.2 million deaths attributed to COVID-19 in 81 countries to learn how old the people who died from COVID-19 were, and how much their lives were shortened compared to the average life expectancy.

Rostock, Germany. Globally, the researchers estimate that nearly 20.6 million years of life have been lost. “Middle aged people and those in early retirement bear the largest share of total years of life lost in global comparison”, says Mikko Myrskylä, Director of the Max Planck Institute for Demographic Research (MPIDR) in Rostock, Germany. Together with Héctor Pifarré i Arolas from Universitat Pompeu Fabra in Spain, he led the international team of researchers.

This is in stark contrast to the commonly held belief that mainly people with a few years to live died from COVID-19. “Therefore, measures should also be taken to protect younger parts of the population,” says Mikko Myrskylä.

The details show that in high income countries the population over the age of 75 bears a significantly larger share of the years of life lost than the youngest population group - those under 55. This picture is exactly reversed in medium- and low-income countries. Here, the proportion of life years lost is greater in the youngest population group.
The researchers also found that populations in strongly affected countries, such as Italy and the United States, lost up to nine times more years of life than they would have had during an average flu season.

There is much debate about appropriate methods to collect COVID-19 mortality as accurately as possible. “Each method has its own strengths and weaknesses,” says Mikko Myrskylä.

The Infection fatality rate only captures the subset of people whose COVID-19 infection has been confirmed. Without knowing the actual number of infected people, it is difficult to estimate infection mortality using demographic models.

The number of deaths attributed to COVID-19 may overestimate or underestimate the actual number of COVID-19 deaths because it depends on the criteria by which a death is recorded as a COVID-19 death which differ from country to country.

The method of recording total excess mortality involves comparing mortality rates during the pandemic with a baseline value derived from previous years. Estimating this baseline correctly is difficult.

Because of these and other methodological challenges, the results of the new study are only a snapshot during the ongoing pandemic and may overestimate or underestimate the actual number of life years lost.

“Nevertheless, our results confirm that the impact of the pandemic on mortality is large, not only in terms of absolute number of deaths, but also in terms of years of life lost,” says Mikko Myrskylä.