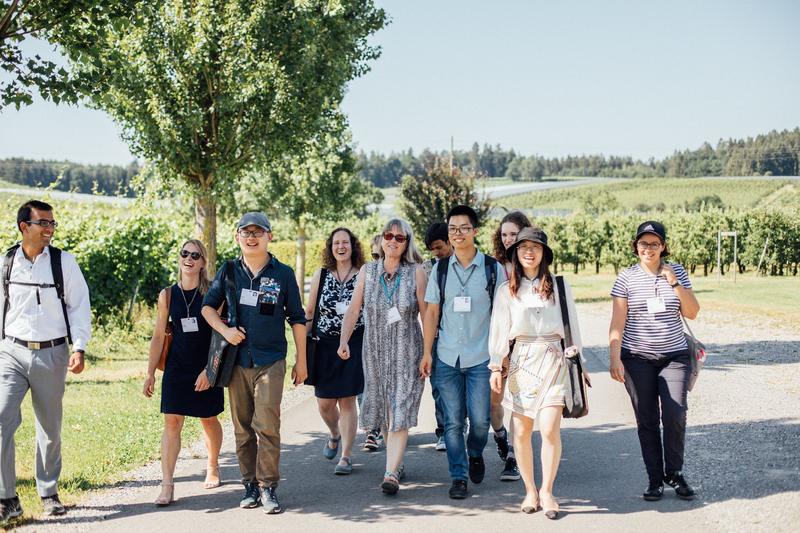 The Meeting will not be able to take place the usual way in 2021, but the organisers have a plan B. | Quelle: Julia Nimke | Copyright: Lindau Nobel Laureate Meetings | Download

• Jubilee Meeting will take place this summer – partly virtual
• Hybrid event: programme in the Inselhalle and on the online stage
• Weighted and randomised selection of young scientist

The plans for this year’s Lindau Nobel Laureate Meeting (27 June – 2 July 2021) were stated more precisely during the recent meeting of the Council: Due to the ongoing pandemic and the associated travel and contact restrictions, there will be significantly fewer participants on-site compared to previous Lindau Meetings.

Combination of On-Site and Online Event
In order to be able to include the traditional Lindau science community in the upcoming 70th anniversary, the Council pursues the concept of a hybrid event this year: The scientific programme with lectures and discussions is composed of a mixture in which the panellists come together both in the Inselhalle in Lindau and virtually from many other parts of the world. As with last year's Online Science Days, the organisers put particular emphasis on the opportunity of an interactive exchange between all participants, in addition to the broadcast.

Despite all restrictions, Countess Bettina Bernadotte, President of the Council, is confident about this year’s Meeting: “As much as we would have liked to celebrate our 70th anniversary with as many people as possible in Lindau, this is not yet the time for large gatherings. Nevertheless, we will develop a suitable format for this summer: The group of on-site participants forms a platform to both digitally broadcast to our community in the world and to receive contributions to the discussion. In this way, we can once again connect Nobel Laureates, young scientists, Lindau Alumni, supporters and guests, as well as media representatives from all over the world."

During the next few weeks, the scientific chairpersons of the Meeting will decide on the basis of a weighted randomised selection who of the invited young scientists will ultimately be able to come to Lindau within the legal framework. This will ensure that a diverse group of scientists from all disciplines and as many nationalities as possible will be able to participate. Currently the organisers are also working on a comprehensive hygiene concept and are structuring the programme in cooperation with the invited Nobel Laureates.

Accreditation as of April
Media representatives, bloggers and science influencers will again have access to the digital formats of the Meeting and the participants. Accreditation will be possible as of April 2021.

Find a selection of pictures on our Flickr profile.

About the Lindau Nobel Laureate Meetings
Since their foundation in 1951 the Lindau Nobel Laureate Meetings have developed into a unique international scientific forum. The annual Meetings provide an opportunity for an exchange between different generations, cultures and disciplines. The theme of the Lindau Meetings alternates between Physics, Chemistry or Physiology and Medicine – the three Nobel Prize scientific disciplines. Every five years an interdisciplinary Meeting takes place, while the Lindau Meeting on Economic Sciences is held every three years. Through the medium of various declarations (2020 for Open Sciences, 2015 on Climate Change, 1955 against the Use of Nuclear Weapons) the scientists have repeatedly joined in the public debate with political appeals.

It was the Lindau physicians Franz Karl Hein and Gustav Wilhelm Parade who approached Count Lennart Bernadotte af Wisborg with the idea of a conference of Nobel Laureates and proceeded to jointly implement this with him – since 1953 with the participation of young scientists. Some 35,000 students, PhD candidates and post-docs have since taken part. Their experience of the Meeting may be literally once-in-a-lifetime, but they remain permanent members of the Lindau Alumni Network and ambassadors for scientific dialogue.

All year long the Lindau Nobel Laureate Meetings continue to pursue their “Mission Education” aimed at emphasising the importance of science and advocating science and research. This is also the purpose for which the online mediatheque is being developed into a learning platform which includes teaching materials for schools.