Pioneering molecule on its way into quantum computers 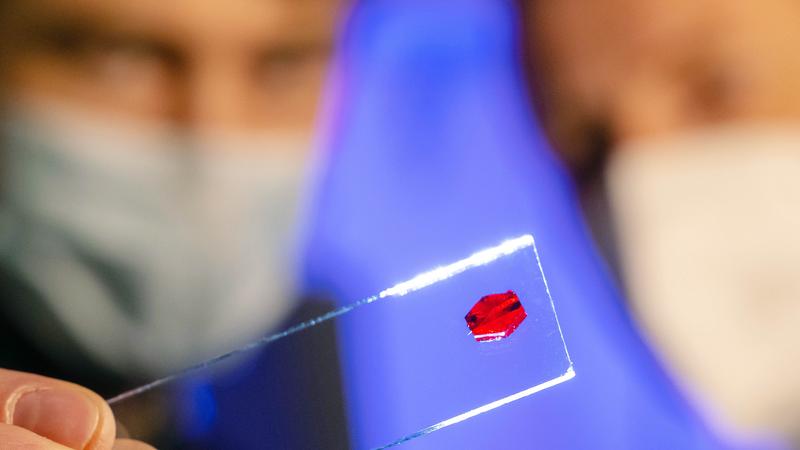 In quantum computers, instead of electrical circuits being switched on or off, quantum mechanical states are altered. For this, suitable chemical compounds are needed. A research team from the University of Jena and the University of Florence has now succeeded in producing such a compound. A special feature of this compound is that its quantum mechanical properties differ depending on the direction from which the compound is viewed.

“When I hold a crystal in my hand and look at it from different perspectives, it looks different on each side,” explains Benjamin Kintzel, who produced the substance at the Institute of Inorganic and Analytical Chemistry at the University of Jena. “This is why it was such a success actually to be able to grow crystals of the new compound and study them. The molecules in a crystal are uniformly arranged. As a result, the quantum mechanical properties of the molecules also depend on how the entire crystal is oriented in space. Due to the differing orientation in space and the corresponding viewing angle, it is possible to study the special quantum mechanical effects precisely and from all sides.”

The effect studied by the team led by Prof. Winfried Plass from the University of Jena was the magnetic interaction between the electrons of three cobalt atoms arranged in an equilateral triangle in the novel molecule. They report on this in the renowned journal “Angewandte Chemie”.
“Put very simply, electrons are electrically charged quantum particles that move,” says Plass, describing the method used, which is also called electron spin resonance. “Their quantum mechanical states can be switched by magnetic fields. This can also be studied with electrons that are located in molecules. What is more, under certain conditions we can control this property by applying electric fields. This is a decisive advantage if it is to be used as a computing unit in a quantum computer in the future, because the technology to apply electric fields in a targeted manner is highly developed.”

Kintzel adds: “However, it is not the case that these computers would simply contain a crystal. Single molecules would suffice, arranged on a surface accordingly – and in our case also spatially oriented. From this, completely new properties could be discovered.” These perspectives can now be studied and understood in more detail using the new cobalt compound.