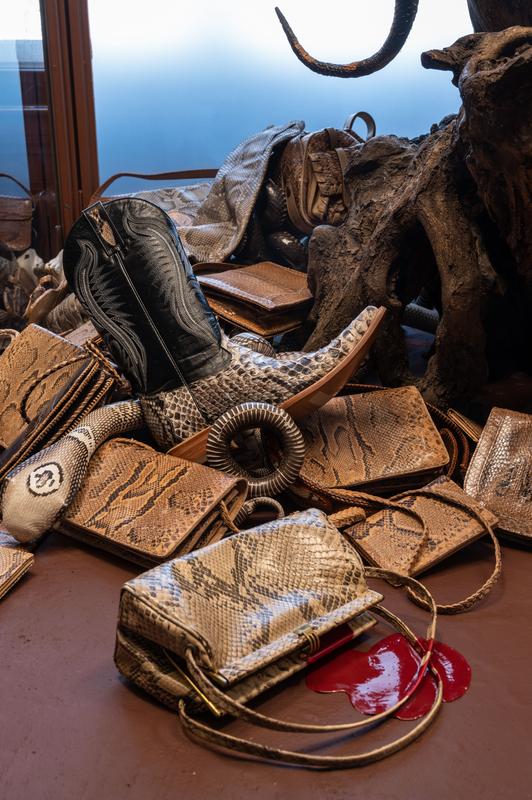 March 3rd is dedicated to the protection of species. The World Wildlife Day initiated by the United Nations is intended to raise public awareness of this issue and to commemorate the signing of the Convention on International Trade in Endangered Species of Wild Fauna and Flora (CITES) on March 3rd, 1973.
Species protection is one of the most burning issues of our time and is dealt with on an ongoing basis at the Natural History Museum Vienna and WWF Austria. The last major joint cooperation between the two institutions resulted in the sensational exhibition "The Business of Death. The Last Species Extinction?", which was on show at the NHM Vienna in 2013/14.

Recently, a new showcase with a special focus on reptiles was set up in room 27 on the topic of wildlife conservation. A wide variety of products made of snakeskin are on display. Attention is also drawn to the cruel way in which leather is obtained. Many snakes are often caught and killed illegally. Often, the animals are filled with water while still alive so that the skin can be peeled off more easily. Then they are skinned alive - an agonising death.
"Reptile leather has gained popularity again. Many designers use snakeskin for belts, bags and shoes. In the last 15 years, several million skins and hide pieces have been imported into the EU for this purpose. The snakeskin products on display were confiscated by Austrian customs or come from estates and thus came to the Natural History Museum Vienna," says curator Dr Silke Schweiger, head of the Herpetological Collection.

"Wildlife crime is the fourth most lucrative crime in the world after counterfeiting, drug trafficking and human trafficking," explains Georg Scattolin, species conservation expert at the nature conservation organisation WWF Austria. Globally, the turnover from the illegal sale of wildlife amounts to an estimated 20 billion US dollars per year. The resulting loss of biodiversity is not only a conservation problem. Poaching and illegal species trade deprive the countries of origin of their natural resources and value creation.

However, the origin of COVID-19 also makes it clear that the illegal trade with wild animals poses a highly underestimated risk to human health. Wildlife markets are a dangerous interface between animals and humans where infectious diseases can be transmitted.

Dr. Silke Schweiger is curator of the Herpetological Collection and scientific assistant at the Natural History Museum Vienna. In addition to looking after and processing the scientific collection, she is also responsible for recording and mapping the Austrian herpetofauna.

Mag. Georg Scattolin is head of the International Conservation, Climate & Energy and Sustainable Consumption programmes at WWF Austria. He holds a degree in zoology and ecology from the University of Vienna. Before joining WWF in 2005, he gained experience in zoology, ecology, environmental education and conservation by working for the University of Vienna, the Natural History Museum Vienna and the International Commission for the Protection of the Danube River.

Video on the protection of reptiles with Silke Schweiger: https://youtu.be/tDLkAxBkDKY