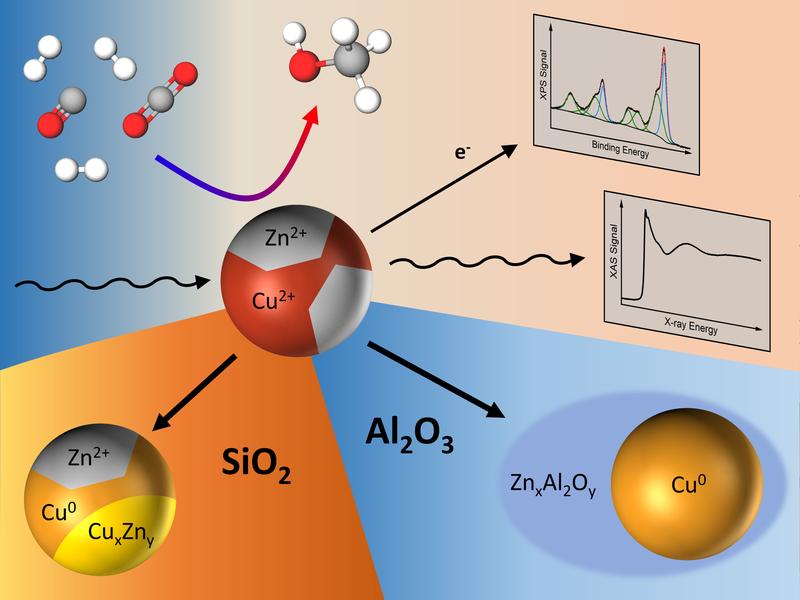 A team of researchers led by scientists from the Fritz Haber Institute of the Max Planck Society have found out that the important industrial process of methanol production can be positively influenced if the copper catalyst used in the reaction comes into contact with zinc oxide.

The current commercial production of methanol through the hydrogenation of the green-house gas CO2 relies on a catalyst consisting of copper, zinc oxide and aluminum oxide. Even though this catalyst has been used for many decades in the chemical industry, unknowns still remain. A team of researchers from the Interface Science Department of the Fritz-Haber-Institute of the Max Planck Society, the Ruhr-University Bochum, Stanford Linear Accelerator Center (SLAC), FZ Juelich and Brookhaven National Laboratory have now elucidated the origin of intriguing catalytic activity and selectivity trends of complex nanocatalysts while at work. In particular, they shed light on the role of the oxide support and unveiled how the methanol production can be influenced by minute amounts of zinc oxide in intimate contact with copper.

Methanol can serve as an energy source or as a raw material for the production of other chemicals, with over 60 million metric tons produced yearly. The traditional copper, zinc oxide and aluminum oxide catalyst converts synthesis gas, which is composed of H2, CO and CO2, into methanol. Though reliable, this specific catalyst’s efficiency changes over time, thus affecting its longevity, as is the case with many catalysts. “We therefore studied copper and mixed copper-zinc nanoparticles on various oxide supports to understand how they interact and evolve and unravel the role of each catalyst constituent. This knowledge will serve to improve future catalysts.” says Núria Jiménez Divins, one of the lead authors of the study.

The team investigated the catalytic process under realistic reaction conditions reproducing those applied in the industrial process, meaning high pressures (20-60 bar) and mild temperatures. This required synchrotron-generated X-ray radiation. Simon R. Bare from the Stanford Synchrotron Radiation Lightsource, who contributed to the experiments, explains: “Reactions at such temperature and high pressures need to take place in a closed container which should also be transparent for the X-rays, which makes the measurements challenging. The special reactor design in combination with synchrotron radiation allowed us to undertake so-called operando-measurements, where we watched live what happens to the catalytic components at the industrially relevant reaction conditions.” This allowed the researchers to follow not just the birth and death of the catalyst, but also its development and transformations leading to changes in its activity and selectivity.

By combining results from microscopy, spectroscopy and catalytic measurements, the team found that some supports had a more positive influence on the performance of the catalyst than others because of how they interacted with zinc oxide, which was available in a highly dilute manner as part of Cu-Zn nanoparticles. On silicon oxide supports, zinc oxide was partially reduced to metallic zinc or gave rise to a brass alloy during the catalytic process, which over time proved to be detrimental for the methanol production. When using aluminum oxide as a support, zinc interacts strongly with the support and gets incorporated in its lattice, giving rise to a change in reaction selectivity towards dimethyl ether. “This is an interesting finding”, says David Kordus, the other lead author of the study and PhD student at the Interface Science Department at FHI. “We know now that the choice of support material has an influence on how the active components of the catalyst behaves and dynamically adapts to the reaction conditions. Especially the oxidation state of zinc is critically influenced by this, which should be considered for future catalyst design.”

This work published in Nature Communications demonstrates that zinc oxide does not need to be available as part of the support, but that it still has a beneficial function even when available in highly dilute form as part of the nanoparticle catalyst itself. This will help elucidate the methanol synthesis catalysts better and potentially lead to an improvement of the catalyst for this important industrial process.