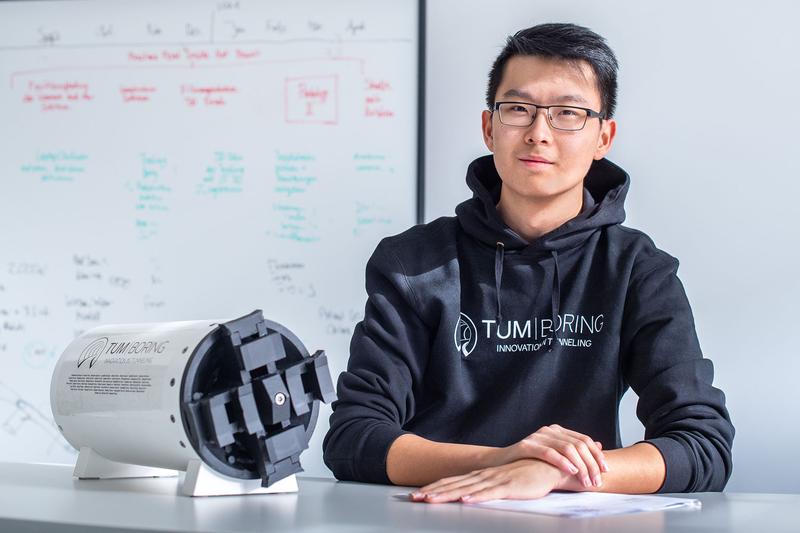 At stake: a science-focused high-tech race that happens underground. TUM Boring – a student group at the Technical University of Munich (TUM) – is taking part in the contest, launched by US billionaire Elon Musk, to develop the world’s fastest tunnel boring machine. And the team has already scored a big success: TUM Boring has qualified for the final in California this summer. In an interview, Haokun Zheng, one of the team leaders, explains the challenges facing the students.

What is the “Not-a-Boring-Competition” all about?

What makes tunnel boring such a complex task?

You need to remove soil and transport the loose material away as it accumulates. Meanwhile, the tunnel wall has to be installed and the ground above the tunnel can’t rise or sink. You also need technology to navigate and adjust the route – and all of this has to come together in a highly confined space below the surface. And then there are the soil conditions to think about. They’re different in every tunnel project, which means that the systems have to adapt accordingly. Those factors create the many technical challenges that make tunnel boring a slow and expensive process.

Why are you so confident that you can change that and do well in the competition?

The conditions at TUM are outstanding. First, there is our large and highly committed team. And we can draw on the experience gained in Elon Musk’s Hyperloop Competition, which was won four times by TUM teams. There’s also the valuable support from our industry partners, who are supplying us with special components and providing a production site in Garching. The small-scale prototype that we built last year is already working very well. And our university is providing us with financial support, too.

TUM Boring has reached the final. How do you feel about your chances?

Of course you can’t promise anything in a competition. But we’re feeling confident and working hard to take the top prize home to Munich.

How does the field of competitors look?

Very mixed. There are teams from big universities like TUM, for example MIT from the USA and ETH from Switzerland. But there are smaller schools, too, and even some private projects.

We can’t talk about the competition and your “TUM Boring” project group without asking how you came up with that name.

Elon Musk was obviously playing with words when he called it the “Not-a-Boring Competition” and set up “The Boring Company”. So in the same spirit we named our team “TUM Boring – Innovation in Tunneling”. Of course “boring” has other associations besides tunnels. But we thought the name would be a fun contrast to our hard-working team and our ambitious goals and might help us get noticed.

Speaking of getting noticed – how did the tunnel project get started at TUM and how did you hear about it?

Kilian, one of the project leaders, has been interested in tunnel boring for a long time. And the first time we put our prototype to work was in Kilian's back yard. He just has a gift for tinkering and figuring things out. When the contest was announced in July 2020, it started with a handful of people getting together and deciding to take part. I’m originally from Düsseldorf, but came to Munich to study at TUM. I wanted to experience this high-tech ecosystem and all of the possibilities here. And as an information science student, I love solving problems. That’s one reason why I got involved in the project.

What is it that fascinates you about the project?

It’s not only about tunnels. It’s about how a sustainable and efficient urban transportation infrastructure could look in the future. If cities don’t want to be smothered in traffic, they need to think in three dimensions. And tunnels would be a highly functional and safe solution. So the project also has a very significant social policy component.

More information:
• Haokun Zheng (20) is studying information science at TUM. He is part of the five-person leadership team of the development group that now has 60 members from 16 different countries with an average age of 23.
• Website of TUM Boring: tum-boring.com