30 years of ASDEX Upgrade – Blueprints for the fusion power plant 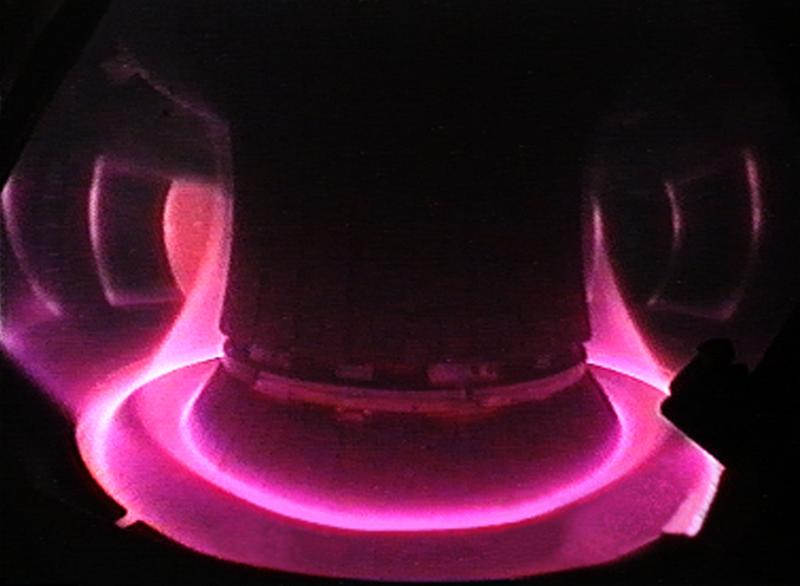 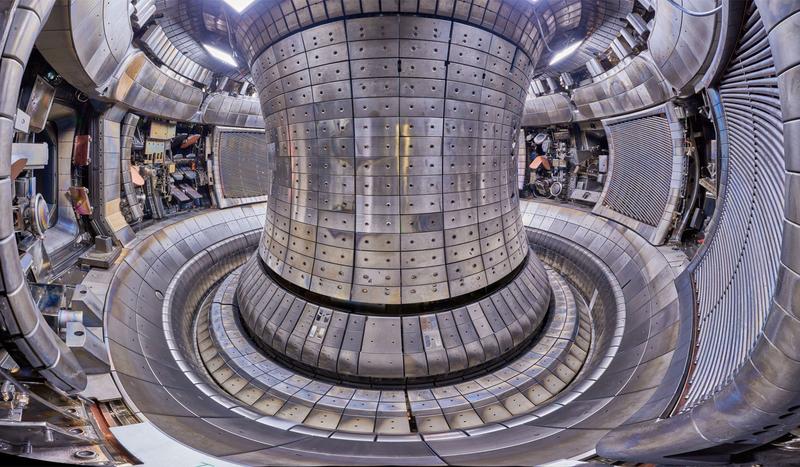 On 21 March 1991, the ASDEX Upgrade experimental device at Max Planck Institute for Plasma Physics (IPP) in Garching/Germany generated its first plasma. The task of this most powerful national fusion device of the tokamak type in Europe is to investigate core research questions under power plant-like conditions. For 30 years now, ASDEX Upgrade has been working on plasma scenarios for JET, ITER and a fusion power plant. An upgrade planned for mid-2022 will prepare the facility for the future.

The aim of fusion research is to develop a climate- and environmentally friendly power plant. Similar to the sun, a future fusion power plant is to generate energy from the fusion of atomic nuclei. The fuel is an extremely low-density, ionised hydrogen gas, a plasma. To ignite the fusion fire, the plasma must be enclosed in magnetic fields almost without contact and heated to a high temperature of over 100 million degrees.

To regulate the interaction between the hot fuel and the surrounding walls, ASDEX Upgrade was equipped with a special component, a divertor. It gave the facility its name: Axially Symmetric Divertor Experiment. An additional magnetic field, the divertor field, directs the outer edge of the ring-shaped plasma onto robust, water-cooled plates at the bottom of the vessel. This removes undesirable impurities from the plasma. At the same time, the edge layer formed by the divertor field envelops the central plasma like a warming mantle – a prerequisite for high thermal insulation. The predecessor ASDEX was already able to demonstrate how well this works.

In contrast to ASDEX, however, the divertor and important properties of the plasma, especially the density and the load on the walls, are more closely adapted to the conditions in a future power plant. Equipped with a powerful plasma heater and a variety of sophisticated measurement apparatus for observing the plasma, ASDEX Upgrade can therefore develop operating modes for a power plant. In 38,700 plasma discharges to date, the facility has answered essential research questions for the European joint experiment JET, the international experimental reactor ITER and a planned demonstration power plant.

Research for the fusion power plant

Example 1: The wall of the plasma vessel
Almost all early fusion devices used carbon for the inner cladding of the plasma vessel. It is heat-resistant and has good thermal conductivity; relieved from the wall, the light carbon atoms are tolerable in the plasma even in somewhat larger quantities. The material is therefore very advantageous for experiments, but completely unsuitable for a future power plant: it would be too heavily eroded by the plasma and would dump too much fuel.

Therefore, in 1996, ASDEX Upgrade began to coat the wall of the plasma vessel – which was initially covered with carbon tiles – with tungsten. Among all metals, it has the highest melting point. However, even the smallest amounts of the heavy tungsten atoms in the plasma causes large radiation losses – the plasma turns cold. For this reason, the wall cladding was replaced only carefully and gradually. By 2007, the last carbon surface had been replaced by tungsten. To avoid the dreaded energy losses in the plasma, many operating methods had to be adapted. In particular, methods were developed to get a cold plasma edge (see PI 12/2012). Direct consequences of this success: In a major reconstruction, the JET joint European experiment was fitted with a tungsten divertor in 2011. The ITER international experimental reactor decided to abandon the initially planned experiments with carbon divertor and go straight for tungsten. For the demonstration power plant tungsten is the reference material.

Example 2: Instabilities
In the interaction of the charged plasma particles with the confining magnetic field, a wide variety of disturbances of the plasma confinement can develop. These include instabilities at the plasma edge, so-called ELMs (Edge Localised Modes): the edge plasma briefly loses its confinement and periodically throws plasma particles and energy outwards onto the vessel walls. While medium-sized facilities such as ASDEX Upgrade can cope with this, in large-scale facilities such as ITER the divertor could be overloaded.

To solve this problem, procedures were developed at ASDEX Upgrade to prevent ELMs, for example by a controlled disturbance of the magnetic field at the plasma edge (see PI 1/2011). For this purpose, 16 small magnetic coils were installed inside the plasma vessel. Their fields can completely suppress the ELM instability. A second method starts at the outermost plasma edge. If it is possible to tailor the right plasma shape here – via the magnetic field – and at the same time ensure a sufficiently high particle density – by injecting hydrogen – then ELMs cannot develop (see PI 3/2020).

As undesired as ELMs are “neoclassical tearing modes”: they occur when the temperature and pressure of the plasma come close to the ignition values. Then, the previously symmetrical plasma ring forms Bubble-like disturbances with their own magnetic field structure – “magnetic islands”. A magnetic short circuit occurs, so to speak. Since a rapid exchange of energy is now also possible across the field lines, plasma temperature and pressure drop across the width of the island. The power yield of ITER and a later power plant would suffer greatly.

In 1999, ASDEX Upgrade succeeded for the first time in preventing the formation of magnetic islands: For this purpose, microwaves were irradiated – with centimetre precision – into the centre of a developing island. In this way, an electric current was generated locally, which dissolved the island. A resounding success was achieved when it was later possible to completely dissolve an island (see PI 8/2004) and to automate the process. In the meantime, the feed-back control of ASDEX Upgrade recognises the formation of an island, targets it with movable mirrors and triggers the microwave beam. Following this model, a steerable launcher for microwaves was included in the ITER plans.

Example 3: Continuous operation
Tokamak-type fusion plants – such as ASDEX Upgrade, JET or ITER – construct the magnetic cage with two superimposed magnetic fields: a ring-shaped field generated by external magnetic coils and the field of a current flowing in the plasma. In the combined field, the twisting of the field lines necessary for plasma confinement is achieved. The plasma current usually is induced in pulses by a transformer coil in the plasma. Therefore, the entire system operates in pulses – a flaw of the otherwise very successful tokamaks.

For this reason, various methods are being investigated to generate the current in the plasma continuously, for example by injecting high-frequency waves or particle beams that drive an additional current in the plasma. In this way, it is also possible to influence the profile of the current in the plasma and thus change the twisting of the field lines. A suitable shaping of the profiles of plasma pressure and field line twisting can also amplify the so-called bootstrap current. This electric current, which the plasma builds up on its own in the event of pressure gradients, can account for several tens of percent of the total current. It can therefore be used to make the discharges less dependent on the transformer and longer.

At ASDEX Upgrade, both have been achieved for the first time – by carefully directing the discharges – on a machine with a purely metallic inner wall. (see PI 4/2016). Under these challenging but reactor-relevant conditions, operation succeeded almost without a transformer. If ASDEX Upgrade had not been equipped with copper coils but, like ITER, with superconducting magnetic coils, this phase could have been extended for longer – potentially up to continuous operation.

Example 4: Disruptions
One disadvantage of tokamak fusion systems is current disruptions. In this case, the electric current flowing in the plasma is lost within a few milliseconds. This leads to strong electromagnetic forces that can damage some of the components. In a power plant, this would result in costly repairs.

Since the triggers of such disruptions are known, countermeasures can be taken. They soften the process and distribute the plasma energy as light radiation evenly over the wall. At ASDEX Upgrade, this is done, for example, by fast gas pulses or pellets of frozen gas that are injected into the plasma. However, it would be best to avoid disruptions altogether. By an intelligent control algorithm, this has been achieved for some cases at ASDEX Upgrade. Covering all causes completely, however, will still require several years of development.

Outlook
During these 30 years of operation of ASDEX Upgrade, the divertor shape has been changed and optimised several times. The plan is now to take a further step and test a new divertor concept: two additional magnetic coils on the ceiling of the plasma vessel are to spread out the divertor field so that the power from the plasma is distributed over a larger area.
Planning for the new divertor began in 2016, and the design has since been completed. Prototypes and a test stand for assembly have been built to prepare the manufacturing processes and installation in ASDEX Upgrade. Assembly is scheduled to begin in mid-2022.

With these and numerous other investigations, the Garching tokamak will continue to develop solutions to the problems of a future demonstration power plant. “In many respects,” says project leader Professor Dr. Arne Kallenbach, “ASDEX Upgrade can be seen as a ‘blueprint’ for a tokamak fusion power plant. The prototype discharges developed over 30 years, together with newly developed computer codes, provide reliable information for a power plant.”