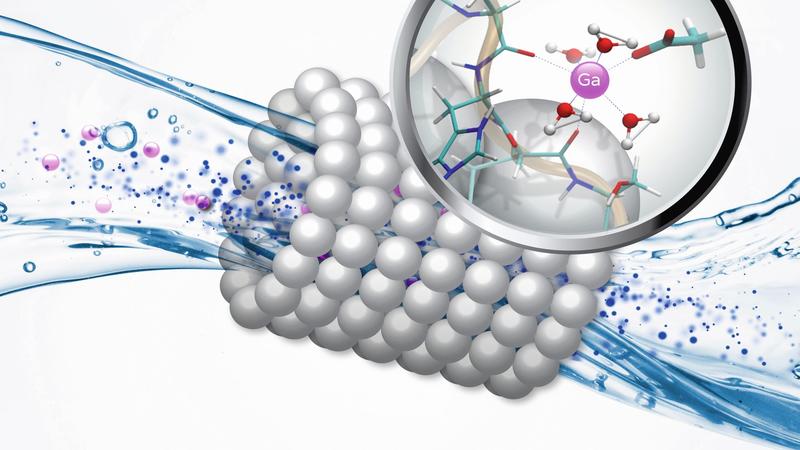 Gallium is a rare metal, but it is widely used in the high-tech industry. This extreme contrast makes recycling indispensable. However, current recycling processes are costly and chemically polluted. Biotechnological approaches, therefore, rely on peptides, as they are able to bind metallic particles, minerals and metal ions in an environmentally friendly manner and to differentiate them in a targeted manner. Scientists at the Helmholtz Institute Freiberg for Resource Technology (HIF) at the Helmholtz-Zentrum Dresden-Rossendorf have now shown, that peptide-based material can be used for the extraction of gallium from production wastewater caused by the semiconductor industry.

Our high-tech world would be unthinkable without rare metals because they are found in many devices and systems that surround us. Many of these metals have a lower natural occurrence and are difficult to mine, which is also associated with high costs. This is why recycling plays an even more important role. By recovering the rare metals from industrial wastewater, slag or devices that are no longer in use, they can be returned to the recycling cycle. HIF researchers led by Dr. Katrin Pollmann have demonstrated that selective biosorption, i.e. the ability of certain microorganisms such as bacteria, yeasts, fungi, and algae to enrich themselves with metals or metal ions, is a suitable process for the recovery of gallium from industrial wastewater.

We find this high-tech metal, for example, in light-emitting diodes and solar cells; it serves as a coating for mirrors and is used in medicine for tumor diagnostics. It is mainly used in the semiconductor industry. In conjunction with arsenic, it is used as gallium arsenide for wafer production. Most of the industrial gallium is lost during production. Nevertheless, gallium is of increasing importance for the industry. A high recycling rate from the gallium-processing industry is all the more important since they represent a much richer and more important source for secondary gallium production.

Bio-recycling – ecological alternative to classical separation processes
Previous recycling processes for the production of gallium are often based on chemical electrolysis processes. The very energy-intensive electrolysis produces waters, which leads to the dilution of valuable substances and the increase in salinity of the wastewater. The situation is different with so-called biocomposites, they are recyclable and can be used again and again in separation processes. This innovative recycling method includes processes that use biological systems to extract metal from ores or waste materials. The release of metals can occur directly through the metabolism of microorganisms or indirectly through their metabolic products.

One of these bio recycling processes is biosorption. “The biomass binds certain ions or other molecules in an aqueous solution or concentrates them. Biosorption is not dependent on metabolic activity and does not require the supply of nutrients. This enables biosorption to be used even in highly toxic environments. Biosorption is therefore an environmentally friendly alternative to recovering metals from industrial wastewaters, leaching solutions or mine waters,” explains Katrin Pollmann, leader of the biotechnology department at HIF. The challenge, however, is to find the appropriate biomolecules.

Peptides as a fishing rod
The Freiberg scientists are working on specialized biosorption materials that are able to specifically recognize individual elements, bind them selectively and thus remove them from solutions. They use peptides, which are small proteins made up of amino acids. “Peptides are small and therefore robust which makes them particularly suitable. There are 20 naturally occurring amino acids that have different properties and can be linked together in a freely combined peptide chain. This creates biomolecules that are able to sit on every conceivable surface and recognize them very specifically. The right peptides are selected with the help of the Phage Surface Display method,” describes HIF scientist Dr. Nora Schönberger.

This method focuses on bacteriophages, meaning viruses that are specialized in infecting bacteria. The element-specific peptides are firmly anchored on a carrier material with certain properties. The resulting biocomposites “fish” the target substances from a complex mixture of materials due to the unique peptide structures. Peptides thus enable selective metal recovery.

Biotechnological approach with gallium-binding peptides
As part of the project "EcoGaIN", in which the extraction of gallium from production wastewater from the semiconductor industry was examined, Schönberger has dealt in detail with the identification of gallium-binding peptides. "We used chromatopanning, a technique that selects peptides that bind to a specific target. With the help of this separation process, we isolated the special peptides that capture the gallium ions from the process wastewaters,” Schönberger explains and continues: “For the biosorption studies, I packed a peptide-based filter material in a column and built a kind of gallium filter through which the wastewaters could run. The material is well suited if it retains the gallium in the filter material as efficiently as possible, while the other contaminations that are contained in the process wastewaters, above all arsenic, simply flow off. Subsequently, the gallium bound to the filter material must be able to be separated from the column in order to recover the gallium.”

One of the five tested peptide filter materials in these experiments was shown to be particularly suitable for efficiently recovering gallium. “The use of biological systems in resource technology complements the repertoire of conventional metallurgical processes. It currently fills a methodological niche by making metals accessible that cannot be efficiently exploited with classical metallurgical approaches,” Pollmann says. However, this method has to be further developed for industrial application, since the chemical synthesis of the peptides for economic use in resource technology is too expensive and not yet sufficiently environmentally friendly. Furthermore, it is important to optimize the peptides that a better metal binding capacity is achieved and thus a more efficient use is possible.