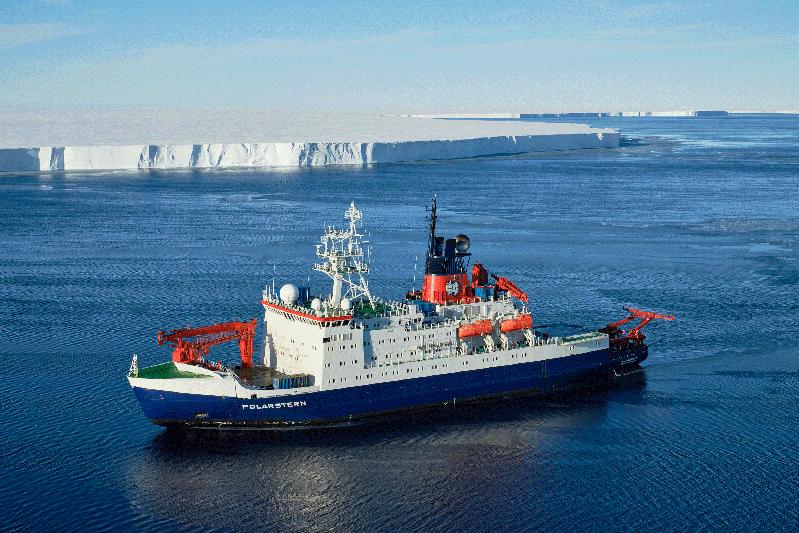 Roughly two weeks ago, a massive iceberg calved from the Antarctic Ice Sheet. As the only research vessel nearby, the Polarstern took the opportunity to enter the area between the iceberg and the Brunt Ice Shelf. The first images from the seafloor reveal an amazing level of biodiversity in a region that was covered by thick ice for decades. The sediment samples gathered are expected to provide more detailed insights into the ecosystem, while a geochemical analysis of the water samples collected will allow conclusions to be drawn regarding the nutrient content and ocean currents.

People around the world are fascinated by satellite images of the massive iceberg dubbed A74, which calved from the Brunt Ice Shelf in the Antarctic on 26 February 2021; with an area of 1270 square kilometres, the iceberg is twice the size of Berlin. The German research icebreaker Polarstern is the only research vessel on site, and has succeeded in penetrating the gap between the iceberg and the shelf edge, to explore the seafloor that has been covered by hundreds of metres of ice for decades. Experts from the Alfred Wegener Institute, Helmholtz Centre for Polar and Marine Research (AWI) and their international partners arrived on scene shortly after the calving event. The scientists on board are thrilled with the once-in-a-lifetime photographs and sediment samples from the seafloor, not to mention the geochemical measurements of the water column above it. Gale-force winds had initially kept the Polarstern from reaching the region, but on the weekend (13/14 March 2021), more favourable weather conditions led the captain to give a green light for making a circuit of the iceberg and exploring the surrounding area.

German Federal Research Minister Anja Karliczek underlines the importance of this mission, which is made possible through the institutional funding of the AWI by the Federal Ministry of Education and Research, as follows: “It is a unique opportunity offered to researchers on board Polarstern to explore the Antarctic Ice Sheet. I am grateful to the crew of the Polarstern for taking on the associated hardships and also risks. Polar research makes a decisive contribution to better understanding and foreseeing climate change and its consequences for our earth. We need this knowledge in order to be able to take effective countermeasures against climate change. The effects of climate change in Antarctica, among others, are worrying. "

This on-site research is essential to understanding the processes that massive calving events set in motion. Though doing so offers vital snapshots, it’s rarely possible to be nearby when a region becomes ice-free and first comes in contact with sunlight. Icebergs of this size only calve roughly once every 10 years in the Antarctic. Their smaller counterparts break free more frequently: snow falls and is compressed into thick layers of ice, which slowly slide along the continent toward the sea. Tongues of ice, referred to as ice shelves, float on the ocean instead of resting on dry land, and finally calve when the force of inland ice makes their connection to the glaciers unstable.

To date, climate change has especially warmed West Antarctica; the global temperature rise hasn’t yet affected East Antarctica, i.e., the Polarstern’s current research region. However, climate models predict that, in the course of this century, the air temperature will also rise over the East Antarctic Weddell Sea, negatively affecting the sea ice. In turn, such changes could produce fundamental transformations of the hydrography: to date, a stable front has kept comparatively warm water from reaching the ice shelf. If there is less and thinner sea ice, and therefore less salt is released into the water column, that front could become unstable, and the warmer water it lets through could melt the shelf from below. In addition, a warmer atmosphere could mean that icebergs calve more frequently. The Antarctic is currently losing ice mass at a higher rate than before 2000, as the AWI experts have observed.

In order to create simulations, researchers need data from the regions in question – and gathered not just once, but consistently over extended timeframes. Accordingly, the Alfred Wegener Institute has conducted regular Polarstern expeditions to the Antarctic Weddell Sea since the 1980s. In this regard, the seafloor, ocean, ice and atmosphere are investigated – with different focus areas, depending on the respective expedition. “It’s extremely fortunate that we were able to respond flexibly and explore the calving event at the Brunt Ice Shelf in such detail,” says Dr Hartmut Hellmer, a physical oceanographer at the AWI and head of the expedition. The planned region lies in the southeast Weddell Sea, so it was already close by. “That being said, I’m even happier that we successfully replaced a number of moorings, which will continue to record elementary data on temperature, salinity, and ocean current directions and speeds once we’ve left. This data forms the basis for our simulations of how the ice sheet will respond to climate change. As a result, we can say with a higher degree of certainty how quickly the sea level will rise in the future – and provide the political community and society at large with sound data for making decisions on necessary climate change adaptation measures,” Hellmer explains.

The experts found that, despite being permanently covered with ice for decades, the seafloor is home to impressive biodiversity. The deep-sea research team observed numerous organisms that had settled on stones of various sizes, surrounded by a silty landscape. The stones hail from the Antarctic continent and are transported to the ocean by glaciers. The majority of the organisms on them are filterers. Whether they chiefly feed on algal remains, or on organic particles transported with the ice, remains unclear. The experts also found a number of non-sessile species like sea cucumbers, sea stars, various molluscs, at least five fish species and two squid species. The deep-sea team photographed and filmed this surprisingly species-rich ecosystem for the first time using the OFOBS (Ocean Floor Observation and Bathymetry System). Since the camera platform is towed below the ship on a long cable, the researchers had to wait for the calving event before they could explore the previously unreachable seafloor. In the future, new technologies like autonomous underwater robots will be used to investigate such habitats.

Journalists will receive additional photos/footage via the AWI's press office upon request.