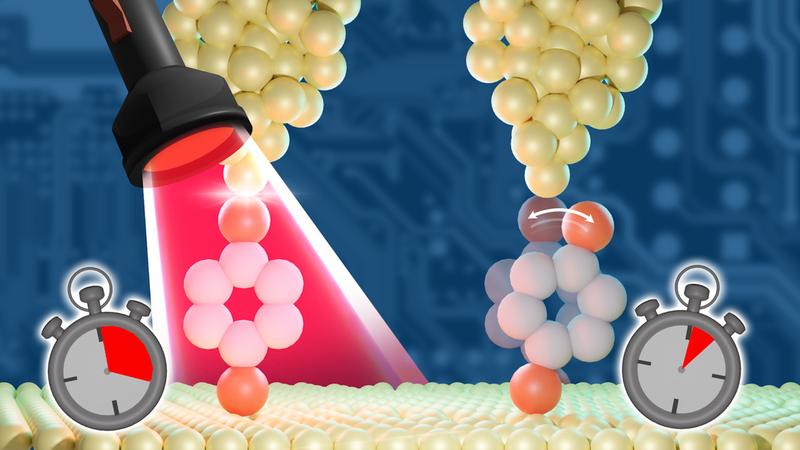 There are worlds between the Zuse Z3, the first functioning digital computer from 1941, and modern microprocessors - both in terms of speed and size. But the further miniaturization of current silicon-based electronics is reaching its limits due to fabrication methods. Paving the way to the realization of future, even smaller circuits is molecular electronics. A team of researchers led by Dr. Katrin Domke of the Max Planck Institute for Polymer Research has now made great progress in characterizing molecules suitable for molecular electronics using a novel experiment.

In recent decades, electronic components, especially processors, have been miniaturized more and more. In the meantime, a physical limit has been reached: components can soon no longer be made any smaller because fabrication methods are reaching their limits. The emerging field of molecular electronics could help to develop even more powerful, smaller and faster electronic components in the future.

To achieve this, components already known from "normal" electronics are to be replicated by individual molecules or groups of molecules in order to produce molecular transistors, capacitors or resistors, for example. In addition to smaller components, the use of molecules also promises less material waste and less expensive components.

However, the characterization of suitable molecules or the construction of functional circuits from such molecules is still a major challenge: On the one hand, individual molecules, which are typically only a few nanometers (millionths of a meter) in size, must be connected to the macroscopic world by electrical contacts. On the other hand, they must remain stably contacted. After all, sticking, welding or soldering does not work on the molecular size scale!

The team of scientists led by group leader Dr. Katrin F. Domke and Marie Curie postdoctoral fellow Dr. Albert C. Aragonès (department of Prof. Mischa Bonn) have now succeeded in keeping the molecule benzene dithiol (BDT), which can be seen as a standard workhorse in the field of molecular electronics, stably contacted between two metal electrodes for longer than usual. Instead of a previous standard duration that was in the range of a tenth of a second, the team was able to extend the contact lifetime by a factor of 10 to more than a second. “We were astonished when we saw how the lifetime increased with the laser power. We were achieving extremely stable junctions with lifetimes never-seen-before in single-molecule junctions at room temperature with a conventional STM set-up. A really exciting moment!”, says Albert C. Aragonès.

What initially still sounds very short, opens up completely new possibilities for science: For example, the extension of the contact duration now enables a more thorough characterization of the properties of the single-molecule contact, in order to investigate, for example, the suitability of the corresponding molecule for a specific task or its behavior during current flow.

For their method, Aragonès and Domke used laser light to amplify the molecular trap in which the molecule is contacted. While this approach is experimentally very challenging in detail, it practically consists of only four components: A molecule - in this case BDT - is deposited on a gold electrode surface and contacted from above with another gold electrode - at an electrode spacing of about half a millionth of a meter. If this tiny metal-molecule-metal contact is now illuminated with a laser beam, the electromagnetic laser field around the molecule is amplified by a factor of 1000 due to the contact geometry. These strong field lines, in turn, trap the molecule between the electrodes, increasing the lifetime of the molecular contact so that it can be observed and characterized over a much longer period of time than without laser light.

"We were thrilled when we found that the conductivity and contact geometry of the molecule trapped with a laser beam did not differ from those of the molecule in the 'dark’," says Katrin Domke. Thus, conclusions about the behavior of "normal", non-irradiated molecular contacts can be drawn from the measurement results of her apparatus, which are relevant for real molecular circuits.

It will probably be several years before molecular electronics is ready for use and a real alternative to current silicon electronics - but with their research, which has now been published in the renowned journal "Cell Reports Physical Science", Domke and Aragonès have been able to take an important step towards the development of molecule-based electronic components.