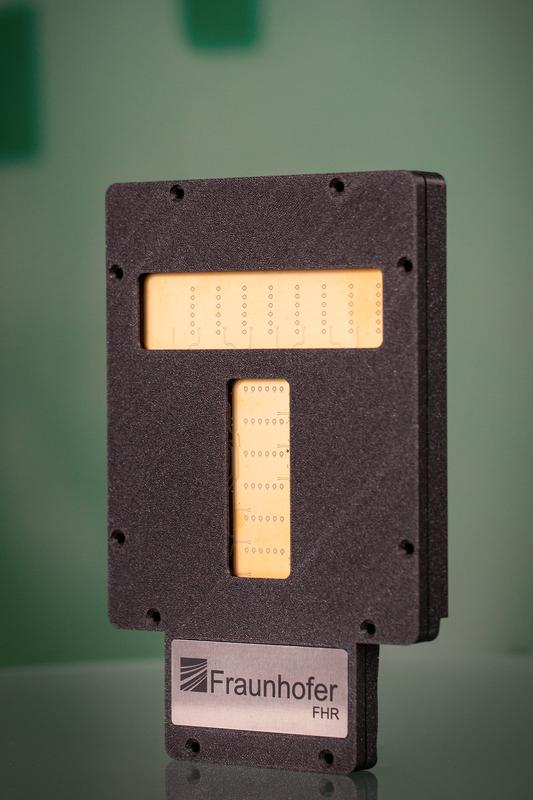 At busy transport hubs where cars mix with cyclists, buses, and streetcars, it can be impossible for drivers to keep track of everything around them. A radar sensor system could solve this problem by issuing an early warning for drivers and self-driving vehicles when a pedestrian runs toward the road or the car. The system, developed by Fraunhofer researchers, will even be able to interpret and understand entire situations on a road with the aid of artificial intelligence.

People react quickly – but sometimes not quickly enough. For example, if a child runs across the road to catch a bus that has stopped on the opposite side, a car driver is very unlikely to be expecting this to happen – with potentially extremely serious consequences. Although sensors can detect when people or other objects are close to a vehicle and warn the driver, the warning would come too late in the case of a child running into the road. In the HORIS project, the Fraunhofer Institute for High Frequency Physics and Radar Techniques FHR, the Fraunhofer Institute for Integrated Circuits IIS, and the Fraunhofer Application Center “Connected Mobility and Infrastructure” have set themselves the goal of improving road safety – particularly in situations involving large numbers of road users. “Rather than relying solely on a proximity warning in the car as in the past, the focus here is on predicting behavior in a reliable manner,” explains Dr. Reinhold Herschel, Group Manager at Fraunhofer FHR. If a child runs into the road, the aim is for the sensors to detect the imminent danger as soon as the child starts to move – saving valuable time and, in some cases, even saving lives.

To begin with, the sensors will be installed at critical points in the infrastructure – at bus and streetcar stops, for example. From these locations, they will monitor the speed of the people waiting at the stops and transmit the data to the moving traffic in the vicinity. As these radar sensors do not record optical images, there are no privacy or data protection issues. In the longer term, it should also be possible to use the evaluation algorithms in the radar sensors in the car.

The three institutes have divided up the development tasks based on their areas of ex-pertise. Fraunhofer FHR is concentrating on the technological side and is developing the algorithms which identify an object as a person, set a marker, and determine the speed at which the person is moving. Are they moving toward the radar sensor and, hence, toward the road? There is a fine line between triggering a false alarm and failing to issue a warning in time, but the radar sensor can overcome this problem by taking around a hundred measurements every second. An alarm will only be triggered if the person is consistently moving toward the road at a given minimum speed over the course of several measurements.

Fraunhofer IIS is focusing on the reference measurement techniques and on motion capture. “Our L.I.N.K. Test and Application Center opens up unique possibilities when it comes to taking measurements: The hall is so large that we can build a bus stop inside and fit a car in there as well,” says Nicolas Witt, Group Manager at Fraunhofer IIS. The research term is carrying out multiple measurement campaigns using 30 motion-capture cameras in the L.I.N.K. hall. These cameras detect people who have been tagged with small markers over an area measuring 20 by 30 meters – there are only very few motion-capture systems of this size available.

Fraunhofer IVI has identified suitable test scenarios and is responsible for their develop-ment. “For example, we have installed two radar sensors at a test bus stop on the campus at the Technische Hochschule Ingolstadt. These sensors monitor the surroundings from several angles,” says Prof. Gordon Elger, Head of the Application Center. In the future, connected or self-driving vehicles could be told to drive more slowly if there are lots of people standing at a bus stop. If, on the other hand, there is no one at the stop, cars can drive past at the maximum permitted speed.

The demonstrator is ready: It can currently detect up to eight people at the same time and determine whether they are moving toward the road. A demonstration and a presentation for interested customers are planned for the second quarter of 2021, depending on the situation around the coronavirus pandemic.

However, the collaboration between the three Fraunhofer Institutes is far from over. They plan to build on the HORIS results in a follow-up project which aims to further optimize the sensor, this time not just looking at whether someone is moving toward the road, but also taking account of the issues determining how and why they might make that move. As well as detecting that someone is approaching the car, the system will use artificial intelligence and an additional infrared camera to understand the overall situation. The aim here is to improve the system's reaction time. If, for example, a ball rolls into the road, a child may well follow it a few seconds later. If a bus stops, it is possible that someone will rush across the road to catch it. By detecting the whole situation rather than just the movements of individual people, the system can save valuable extra seconds when warning the driver and help prevent dangerous situations.