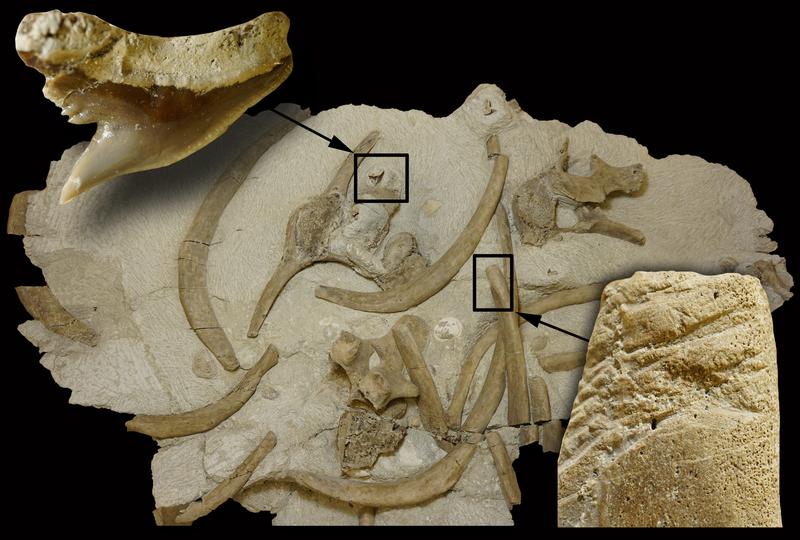 Researcher of the NHM Vienna identified a fossilized skeleton of a manatee. The bones bear rare fossil bite marks and teeth of a tiger shark were also found next to the skeleton. What do these fossils tell us about life 14.5 million years ago?

Teeth and bones are often the only evidence of ancient life that “survive” the transition from the bio- to the lithosphere becoming fossils. The reconstruction of past environments and their inhabitants relies exclusively on well-preserved fossils, which in rare cases even reveal evidence of predator-prey interactions several million years ago. Based on bite marks on a 14.5-million-year-old manatee skeleton from the Styrian Basin in Austria, a new study has unearthed the oldest such interaction between tiger sharks and manatees.

The well-preserved manatee skeleton was found by Gerhard Wanzenböck (Bad Vöslau) and excavated by a team of the Palaeontological-Geological Department of the Joanneum Graz (Styria) in 2012. However, only the subsequent precise preparation of Norbert Winkler (Joanneum Graz) revealed the extraordinary rare find: Bite marks on the fossilized bones!

A scientific team led by Iris Feichtinger and Ursula Göhlich from the Natural History Museum identified the causal agent of the bite marks as the extinct tiger shark Galeocerdo aduncus and the victim as a juvenile manatee of the extinct genus Metaxytherium. The associated teeth possess the unique tooth morphology of the genus Galeocerdo, which is reflected by an unambiguous pattern of bite marks. Similar bite marks were reproduced experimentally to demonstrate the direct evidence that tiger sharks fed upon the juvenile Metaxytherium.

“The tiger shark literally gritted his teeth on the manatee’s carcass”, says study leader Iris Feichtinger. “This snapshot into a world 14.5 million years before today offers rare insights into environmental conditions and animal behaviour at that time, which provide vital information for a better understanding and reconstruction of the past.”