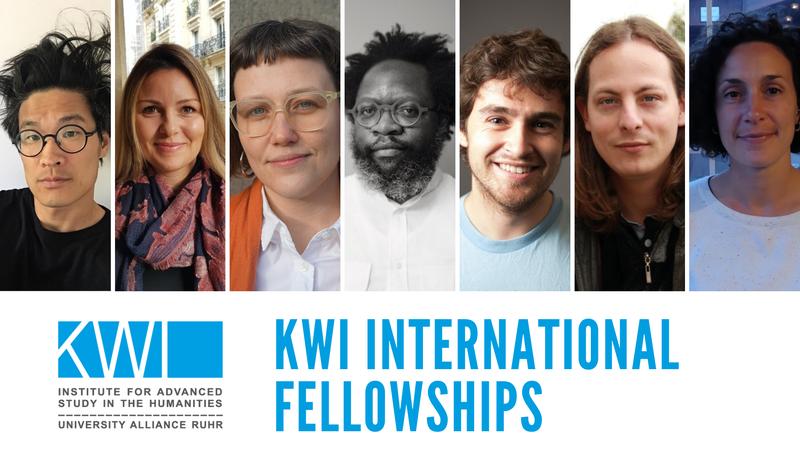 KWI International Fellows Emily Doucet, Péter Kristóf Makai, Elisha Masemann, Tinashe Mushakavanhu and Bécquer Seguín as well as Thyssen@KWI Fellow Chiara Salari and Research Fellow Il-Tschung Lim are beginning their work at the Institute for Advanced Study in the Humanities (KWI) this month. They are taking over from physicist Carla Rodrigues Almeida and historian Ryan Nutting, who were with us during the past six months.

Emily Doucet (Canada) is a historian of visual media. At the KWI, she will work on a project examining the relationship between the postal service and the development of new photographic formats in the late nineteenth and early twentieth centuries. Péter Kristóf Makai (Hungary) will use his KWI Fellowship to study how theme parks are transmediated into digital and board games. Art historian Elisha Masemann (New Zealand) will work on a monograph on the relationship between concepts of art and the city through artistic responses to contentious urban conditions since the mid-twentieth century. Tinashe Mushakavanhu (Zimbabwe) is an interdisciplinary researcher working on a multimedia project about postcolonial Africa through the lens of music and popular culture, entitled Bob Marley and the Making of Zimbabwe. Bécquer Seguín (Spain), assistant Professor of Iberian Studies at Johns Hopkins University, will be completing his book The Op-Ed Novel: Spain and the Politics of Literary Persuasion at the KWI. This study combines sociology and Iberian literary history to examine why novelists have come to play an unusually prominent role in the Spanish public sphere since the country’s transition to democracy in the 1970s. Art historian Chiara Salari (Italy) is the next Thyssen@KWI Fellow funded by the Fritz Thyssen Foundation. She will devote her time at the KWI to exploring the concept of environmental aesthetics by analyzing the role of photography in the perception of natural, urban and post-industrial landscapes. Part of her research focuses on the (cultural) conversion of industrial sites of the “industrial heritage trail” in the Ruhr area.

Additionally, the KWI welcomes sociologist Il-Tschung Lim (most recently assistant professor at the University of Gießen) as a Research Fellow. He aims to complete his postdoctoral project dealing with the circulation of the diversity discourse through a study of the implementation and application of diversity management at German universities.

You can find further information on these research projects on the KWI homepage.

KWI FELLOWSHIPS
KWI International Fellowships are awarded for six months to excellent researchers from the humanities, cultural studies and social sciences. The Thyssen@KWI Fellowship, financed by the Fritz Thyssen Foundation, is integrated into the international fellowship programme and reaches out to excellent researchers of all nationalities. Both fellowship programmes were established in 2020. The next call for applications for the period from March to October 2022 will follow shortly.

About the Institute for Advanced Study in the Humanities (KWI):
The Institute for Advanced Study in the Humanities (KWI) Essen, Germany, is an interdisciplinary research centre following the tradition of international Institutes for Advanced Study. In its role as an inter-university institution connecting the Ruhr-University Bochum, the Technological University Dortmund and the University of Duisburg-Essen, the institute works together with researchers and scientists from its neighbouring universities as well as other partners from the federal state NRW and places in- and outside of Germany. Within the Ruhr area, the KWI is a place to share and discuss the questions and results of ambitious research with interested parties from the city and the greater region. Currently, work at the KWI focusses on the following areas: “cultural studies of science and science policy making”, “sociology of literature and culture”, “science communication”, and a “teaching lab”. Projects in the established research field “culture of communication”, as well as individual projects, will be continued.