Keep calm! How blood vessels are kept in check 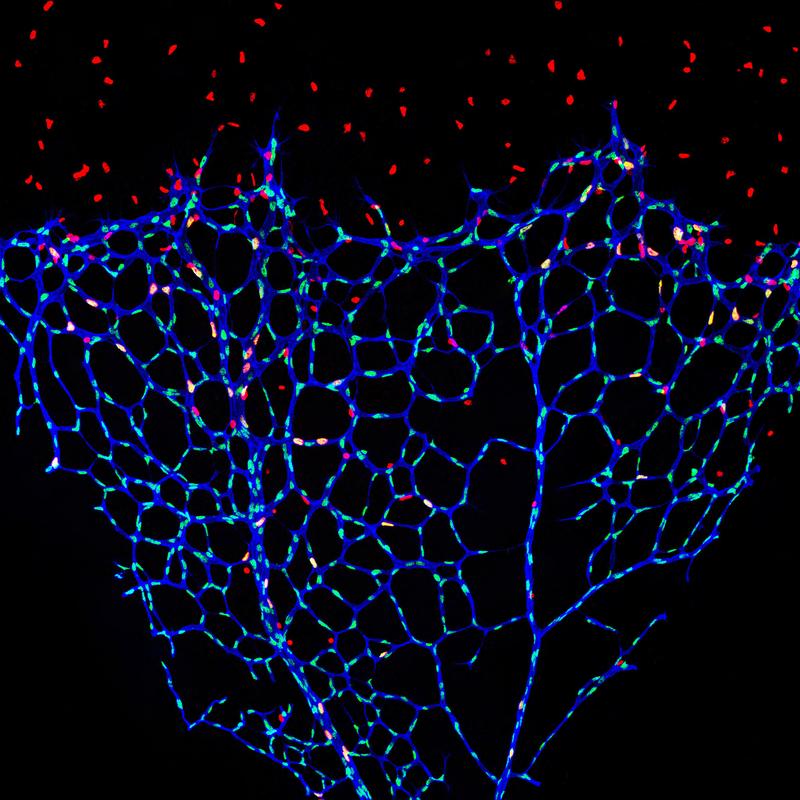 The inner surface of blood vessels is lined by a wafer-thin layer of cells known as the endothelium, which forms a crucial barrier between blood and the surrounding tissue. The single-layered cell structure promotes the exchange of oxygen and nutrients, while simultaneously preventing the uncontrolled leakage of blood components. Only when the metabolic needs of the surrounding tissue increase, e.g., during growth, wound healing or tumor development, do endothelial cells abandon this stable cell association in order to divide and form new blood vessels. The signals that trigger this activation have been throroughly studied.

Previously, however, little was known about how endothelial cells maintain their stable resting state. This is what scientists at Berlin Institute of Health (BIH) at Charité have now investigated together with an international team of researchers. They have published their findings in the journal Nature Cell Biology.

Michael Potente is a cardiologist and blood vessel researcher. He arrived at the BIH from the Max Planck Institute for Heart and Lung Research just a few months ago, and is now moving into his new laboratory in the recently opened Käthe Beutler Building on Campus Berlin Buch. There he will conduct research at the BIH & MDC Center for Vascular Biomedicine. “Even in these turbulent times, we have been working vigorously on our major project to better understand blood vessels,” explains the Professor of Vascular Biomedicine. “Blood vessels are everywhere in the body, and they also play a key role in many illnesses.”

Normally, blood vessels in the adult body are in a stable resting state. New vascular capillaries sprout only rarely, for example, during the female menstrual cycle, wound healing or during pathological processes such as tumor growth. The signals that stimulate the endothelial cells to divide are largely known. “We wanted to understand instead what keeps endothelial cells in a dormant state – also known as quiescence,” says Michael Potente.

The scientists from his team already had a good idea where to look: “There are factors that prevent cells from proliferating. One such factor is FOXO1, which controls the transcribing of genetic information in cells; if we switch off FOXO1 in endothelial cells, this leads to excessive vessel growth. Conversely, we can stop blood vessel formation by specifically switching on this factor. We wanted to find out how exactly FOXO1 does this,” explains Jorge Andrade, one of the three lead authors of the paper.

To do this, the scientists transferred a continuously active form of FOXO1 into endothelial cells. This caused the endothelial cells to stop dividing and remain in a state of inactivity. To find out how FOXO1 does this, the researchers investigated the metabolism of the cells. For this purpose, they isolated all metabolic products from the cells, which are also known as metabolites. “In this process, we saw that the concentration of 2-hydoxyglutarate, in particular, increased due to FOXO1. This metabolite has already become very well known in cancer medicine,” reports Ana Costa, another lead author of the paper. However, the researchers found that this is a special form of 2-hydroxyglutarate called S-2-hydroxyglutarate. “This variant differs in structure and function from the metabolite produced in some cancer cells,” Costa says.

“Especially given the fact that ‘too many’ or ‘too few’ new blood vessels play a role in many diseases, it is enormously important for us to better understand the basic mechanisms underlying these processes,” is how Potente summarizes the results. “Our long-term goal is to be able to therapeutically influence the development and function of blood vessels in a targeted manner, and if possible, without any side effects. We have come one step closer to this goal with our work.”

About the Berlin Institute of Health (BIH)
The mission of the Berlin Institute of Health (BIH) is medical translation: transferring biomedical research findings into novel approaches to personalized prediction, prevention, diagnostics and therapies and, conversely, using clinical observations to develop new research ideas. The aim is to deliver relevant medical benefits to patients and the population at large. As the translational research unit within Charité, the BIH is also committed to establishing a comprehensive translational ecosystem – one that places emphasis on a system-wide understanding of health and disease and that promotes change in the biomedical translational research culture. The BIH was founded in 2013 and is funded 90 percent by the Federal Ministry of Education and Research (BMBF) and 10 percent by the State of Berlin. The founding institutions, Charité – Universitätsmedizin Berlin and Max Delbrück Center for Molecular Medicine in the Helmholtz Association (MDC), were independent, member entities within the BIH until 2020. Since 2021 the BIH has been integrated into Charité as the so-called third pillar. The MDC is now the Privileged Partner of the BIH.