Mathematics in the Pandemic - Assistance in the Crisis by Berlin Mathematics 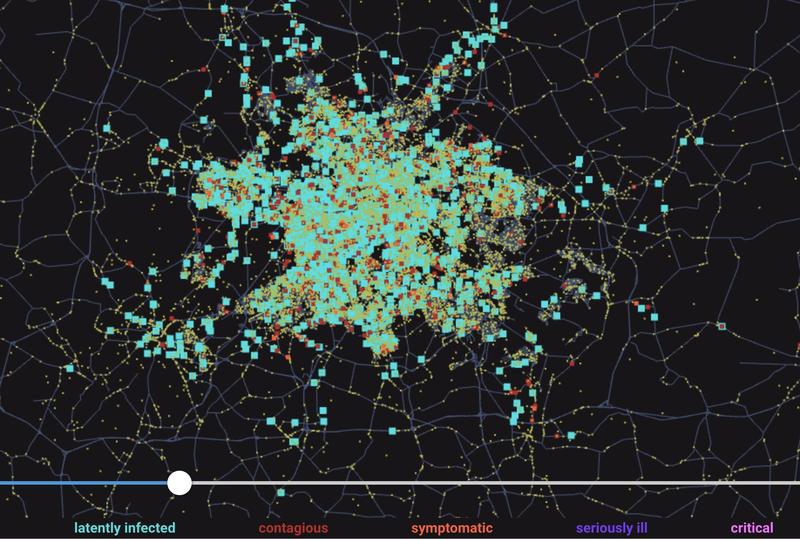 How modeling and simulations by two Berlin research groups help to predict the future and support decision-makers. The approach is the same; the difference lies in the dimensions. While the research group led by Edda Klipp from Humboldt-Universität zu Berlin focuses on a small town with complex models, the teams led by Kai Nagel from TU Berlin, Christof Schütte and Tim Conrad from the Zuse Institute and FU Berlin refer to the big city of Berlin and mobile phone evaluations. Berlin is known worldwide where applied mathematics is highly concerned. This is also underlined by the Cluster of Excellence MATH+, in which all of Berlin's mathematics is involved.

What happens if we all stay at home, if we just go to work, if the schools and kindergartens reopen? These are all questions that have been on our minds for a year and the effects of which we can also follow daily in the media. These questions have been incorporated into the mathematical calculations of two major Berlin research groups. The calculation models used are based on the same method: agent-based modeling. Agents are virtual avatars that move and perform activities in a computer simulation based on given rules. As Björn Goldenbogen of the Klipp Group points out, "Only an agent-based model can make realistic statements because it can represent infection dynamics via human-to-human interaction."

The research group led by Edda Klipp of Humboldt-Universität focuses on the small town of Gangelt, which has a population of 11,000 and is located near Heinsberg. The model’s basis is the agents in their typical living situation and with their typical daily routines as they are common in Germany. This resulted in a very complex model with detailed interaction patterns. The data used for this is freely available on the Internet, such as Open Street Map or data from the RKI. However, the identity of the agents remains anonymous.

Agent-based models can be used to represent the effects of control measures and vaccination strategy via various scenarios. Important initial questions are: What best prevents a wave of infection? What factors contribute to infection dynamics, and to what extent, such as the opening of restaurants? How do non-pharmaceutical countermeasures, such as school closures and mask-wearing, affect infection dynamics? The different scenarios for the lockdown are simulated under these questions, and conclusions about reality can be drawn from the patterns of movement and interactions thus created in the model. For example, it was interesting for the Klipp group to see how the infection wave moves into different age groups. In the beginning, according to their model, children and young people become infected. The elderly are infected last and contribute little to driving the pandemic because their movement patterns are not very active, and they are less likely to associate with young people. As for the question of a lockdown, Edda Klipp says the most important result was the so-called bi-modality: "If you decide to have a lockdown, first of all, you should start it as early as possible and keep it up long enough."

When the subject of vaccines came up, the Klipp group also tried to predict vaccination strategies and their effects using Gangelt as an example. What happens if you vaccinate after the natural wave of infection, i.e., the fastest and most heavily infected group first? Does it make a difference whether schools are open or closed when vaccinating by age? One interesting result was that death rates also drop when schools remain open. Another said that a vaccination strategy that vaccinates people with the highest interactions at the beginning allows so-called herd immunity to be achieved the earliest.

The model of the Klipp working group is public and freely accessible and can be applied as a general concept for all smaller places in Germany, even for future pandemics. The basic idea at the beginning was to provide local assistance without pursuing commercial purposes. So, mayors of smaller communities can download the model and enter their local data to see the forecasts and get the best strategy for their area.

The research groups led by Kai Nagel (TU Berlin), Christof Schütte, and Tim Conrad (ZIB/FU Berlin) work with a very large number of agents in their agent-based computational models. Here, the movement patterns of about one million agents, in this case, the people in Berlin, are computed. That is 25% of Berlin's population, for which a high-performance computer at the Zuse Institute needs only a little less than an hour. Agent-based models also allow many rules to be used and individual decisions to be included, which means that a more comprehensive spectrum of effects can be represented.

The basis for the model is provided by software developed in Kai Nagel's group, which was and is intended for traffic planning and mobility research. The unique selling point of the project, in contrast to other models, is the use of real daily data on activity levels of the population. This is derived from mobile phone data. On the basis of this real data, the agent-based model can be repeatedly adapted to the respective real situation. This means that the model can be used to make predictions about how the infection figures will develop if appropriate restrictions apply and the citizens follow them. These agents are then actually the image or the model, the digital twin, of this city.

An extension of the model makes it possible to calculate everything that involves transmission, e.g., viruses, information, fake news, objects. The model can also be freely downloaded and is also available to other scientists in accordance with the open-source principle.

According to Tim Conrad, there are, of course, also "the limits of modeling in terms of predicting the future, because models predict, in most cases, what is possible within the framework of the given rules. If the rules dictate staying home for three days after an infection, the agent in the simulation will do that. But if that doesn't happen in reality, then obviously the predicted numbers are different." This means, of course, that predictions from a model should not be assumed to be "true" but must constantly be tested and evaluated.

The success of the project is attributable to a passionate team, so Conrad: “There's a big team behind it that's invested a lot of time.” Time and effort that they cannot use for their scientific career, but they want to provide their mathematical knowledge for the benefit of society, particularly in times of crisis. Up to 15 scientists are working on the project, which is funded by the German Federal Ministry of Education and Research (BMBF).

The basic approach is the same for both research groups and is based on the same methodology, agent-based modeling. The difference lies in the respective size of the study site and its characteristics or the underlying data. However, the goals are the same for all scientists: Better understand the pandemic with the help of mathematics and thus to be able to make predictions in order to be able to offer instructions for action and proposed solutions.

Anhang der PM
Press Release: Mathematics in the Pandemic - Assistance in the Crisis by Berlin Mathematics